JOHI (AFP) – His head haloed by a whirlwind of mosquitoes, Aamir Hussain stands on the roof of his home in southern Pakistan surveying the fetid floodwaters all around.

Four months after the start of record monsoon rains linked to climate change, the standing water has curdled into a pestilent soup breeding malaria, cholera and dengue.

The United Nations (UN) has warned of a “second wave” of catastrophe, with the risk that deaths from water-borne disease and malnutrition will outstrip the 1,700 drowned and electrocuted in the initial cascade.

As dusk arrives in Hussain’s submerged village in Dadu district of Sindh province, so do the bugs, and the gamble that they will infect his wife and two children.

“The mosquitoes bite a lot and we fall sick,” said the 25-year-old, atop a brickwork compound framing a courtyard awash with putrid, sucking mud.

His brother, who shares this home, has already ventured off the roof to treat his sick children at hospital with borrowed cash.

“Some of our nets are torn now so we are worried,” said Hussain, whose infant son has fallen ill.

Sindh has been worst-hit by the catastrophic flooding which put a third of Pakistan underwater, displaced eight million, destroyed or damaged two million homes, crippled 1,500 hospitals and clinics and caused an estimated USD28 billion in damages. 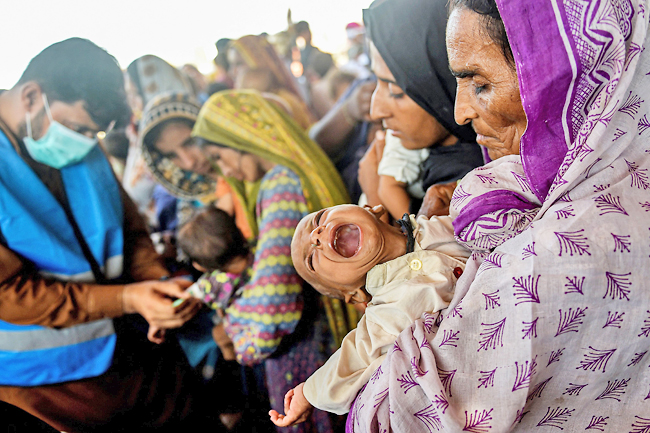 Climate Change Minister Sherry Rehman said this week that more than 20 million people are still in need “with futures that are entirely precarious”. Eight million of those require “urgent medical services”, she said.

Zahida Mallah has already been tipped over the edge.

In a bleak camp south of Dadu, outside the city of Hyderabad, the 35 year-old explained she is in mourning for her twin two-month-old sons.

One died on the day AFP visited, the other around two weeks ago at a separate camp.

They were killed by “colds”, she said, after sleeping out in the open. She was offered a tent only after it was too late.

“We just keep floundering,” she lamented.

Nearby, the city of Johi is corralled by water, accessible via a ramshackle flotilla of canoes powered by greasy petrol engines.

Residents rallied to save the city as the rains lashed down, heaving sandbags into a snaking makeshift levee. But it cannot hold back the disease.

In a desperately rundown emergency clinic, a doctor treats unresponsive seven year-old Kashaf, a suspected malaria patient lying on dirty sheets with a clutch of pharmaceuticals at her feet.

“Perhaps it’s a natural disaster, or perhaps we are being tested, but whatever it is we are the victims,” said her father, 20 year-old Dildar Mastoi.

Under a black scarf his daughter’s eyes hadrolled back into her head. She no longer recognised her parents – doctors said a fever has affected her brain.

Barely adults themselves, her mother and father fled rising waters twice before settling in a camp where they drink from a well they suspect is contaminated by flood water.

“From early evening until dawn, throughout the whole night, the mosquitoes are overwhelming,” said Kashaf’s mother, 19 year-old Bashiran Mastoi. “When the night approaches we start to worry.”

“Life at the camp is immensely miserable,” she said in a vigil on her child’s sickbed.

Medic Manzoor Shahani said there has been a “surge” in malaria, gastro illnesses, and dengue while “most of the patients are children and pregnant women”.

Before the floods southern Pakistan was already devastated by grinding poverty. Now aid only sporadically penetrates the patchwork swampland, while the true number of those in need has yet to even be discovered.

Doctors and officials offer contradicting figures, as they grapple to understand the scale. In Dadu the official death toll is just 23, but everyone privately agrees the real figure must be far higher.

“This is devastation beyond the government’s approach,” said provincial health monitor Faheem Soomro, as young doctors tally the day’s fresh patients at a boardroom table.

Half of malaria tests are coming back positive and most homes have suspected cases.

Sindh has recorded 208,000 cases of malaria so far this year, a dramatic rise from 2021, when cases were reported.

Left untreated – as it certainly is in the stranded swathes of Sindh – malaria can quickly turn fatal. In a normal year there are 50,000 deaths from malaria in Pakistan.

Soomro describes it as “the hidden fever”. It has vague flu-like symptoms – as the mosquito-borne parasite enters the liver and bloodstream, in severe cases swelling the brain.

The healthcare disaster is most easily monitored in camps – there are 19 in Dadu – where the luckiest of the displaced live in row upon row of hundreds of simple A-frame tents.

In one of the “tent cities” home to around 5,000, residents clamour for treatment in a blustery gazebo where doctors test them for malnutrition and malaria, as others offer vaccinations and female health advice.

Soomro estimates 60 per cent of the displaced once stayed in camps like this, but three quarters of those have scattered back to the sodden hinterlands to remake their lives, often out of reach of aid efforts.

Outside the camps the dispersed can be seen everywhere – in tents and on daybeds clustered by highways and near scummy stagnant lakes.

The monsoon torrent came after Pakistan was seared by a spring heatwave, with pockets of Sindh sporadically suffering temperatures of 50 degrees Celsius.

Extreme weather events are increasing in severity as a result of climate change, scientists say.