BRASILIA, BRAZIL (AP) – Jair Bolsonaro told supporters that the future could only bring him three possibilities: arrest, death or a second term as Brazil’s president.

None of those outcomes came to pass. And his October 30 loss to Luiz Inácio Lula da Silva set off two months of relative silence for the self-styled standard-bearer of the Brazilian conservative movement.

Bolsonaro’s oft-cited motto is “God, Family, Country”, and as president he handed more power to the armed forces and loosened gun restrictions. Many of Bolsonaro’s far-right supporters remain in his thrall and have camped outside military buildings, pleading futilely for army intervention that would keep the president in power.

But Bolsonaro authorised his chief-of-staff to preside over the transition process, and moving trucks have started showing up at the presidential palace and residence. Personal items were spotted being removed, especially art given as gifts by supporters – including life-size wooden sculptures of Bolsonaro and a motorcycle.

A seven-term fringe lawmaker before winning his presidential campaign in 2018, Bolsonaro has discussed holding a salaried position in his Liberal Party, a party executive involved in discussions told The Associated Press, asking not to be identified because plans haven’t been announced. 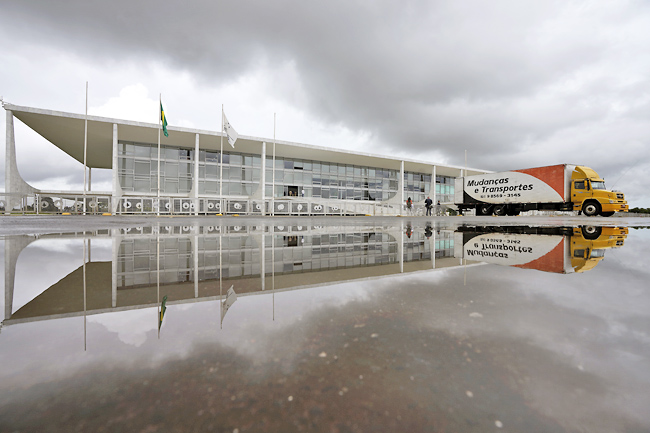 Bolsonaro addressed backers in the capital, Brasilia, once after he lost the vote, saying briefly that the armed forces were under his control. A second time, he stood in silence as backers prayed for him.

Some supporters insist that Bolsonaro would not let them down by giving up the fight but others have started to decamp from important sites. According to Bolsonaro’s official daily agenda, he worked just over an hour each day from the election until December 23.

The Liberal Party will be the biggest party in both the Lower House and Senate. It has declared its opposition to Lula’s incoming government and Bolsonaro is expected to lead the effort within the party, the party executive said.

But many of the Liberal Party’s members are neither fully loyal to Bolsonaro nor ideologically aligned with him, and they will have incentives to work with the new administration, said political analyst and professor at Getulio Vargas Foundation in São Paulo Guilherme Casarões. The Liberal Party is considered centrist and is known for making deals with the sitting government.

“That makes it harder to have the ideological fidelity that Bolsonaro likes to maintain,” said Casarões. “If he doesn’t manage to have total control over the Liberal Party, we are going to see a new split.”

Bolsonaro got 49 per cent of the presidential vote, fuelling the possibility of a presidential run in 2026 and making him a possible aid to candidates in the 2024 municipal elections, said political analyst and professor at the Getulio Vargas Foundation Eduardo Grin.

However, Grin noted there is a history of strong Brazilian candidates failing to sustain support in subsequent years. And the governors of Sao Paulo and Minas Gerais, Brazil’s two most populous states, could prove more palatable options to conservative voters.

The customary final act for outgoing presidents is handing over the presidential sash to their successor. Bolsonaro’s office didn’t respond to requests for comment on whether he will attend Lula’s inauguration.

The last time a president declined to hand over the sash was in 1985, marking the end of the nation’s two-decade military dictatorship and the return of democracy.

Either way, the inauguration will come as a blow to Bolsonaro’s backers, said analyst Mario Sérgio Lima, from Medley Advisors.

“As his supporters are used to radicalism, they are expecting catharsis. When they see Lula being sworn in, they will feel betrayed, like he (Bolsonaro) had the power in his hands and did nothing,” said Lima. “For them, it is a sign of weakness.”

As of January 1, Bolsonaro will no longer enjoy the legal protection of sitting leaders, and could face fresh charges in lower courts. After Lula was convicted of corruption and money laundering by lower courts in 2018, he was deemed ineligible to run in that year’s presidential election and spent more than a year in jail.

His convictions were later annulled on the grounds that he was tried in a court without proper jurisdiction.

“But Lula had an entire party behind him to bring him up again, and that isn’t the case for Bolsonaro,” said Lima, adding that Bolsonaro would struggle to maintain allies fighting for his cause. And any eventual conviction could jeopardise a possible 2026 run by Bolsonaro to return to his former job, in addition to all the other challenges he faces. “The political fate of Bolsonaro and Brazil’s extreme right has more stumbling blocks than it appears,” said Grin. “There will be more difficulties than ease.”