The beat goes on

It is no secret that the Sultanate is rich in culture, and the art of Gendang of Sang Jati Dusun has stood the test of time.

Being a form of musical expression passed down for generations, Gendang creates a window into the lifestyle of both the past and present in the Dusun community.

“Gendang is the act of hitting or hammering a musical instrument or an object at distinctive beats and rhythms. These musical instruments are made of metals like copper as well as animal skins, bones and stems of vegetation,” Chairman of the Pakatan Sang Jati Dusun (PSJD) Brunei Darussalam or Brunei Dusun Welfare Society Eyad Samhan bin Nyawa said.

Though it may spark comparison to other similar traditions, what sets Gendang apart is how it relates to the history of Dusun, explained Eyad Samhan. 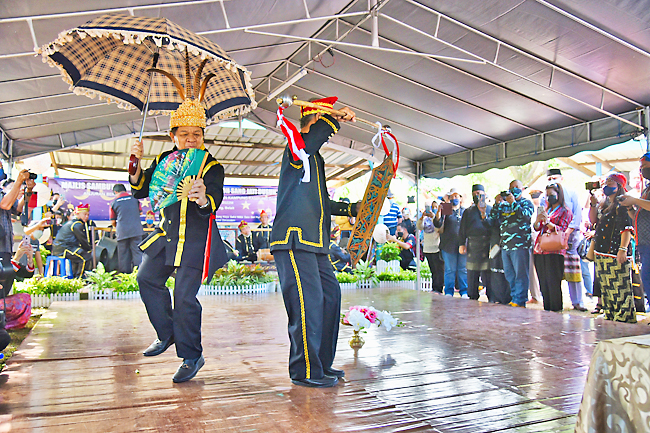 “Gendang is one of the hereditary cultures passed down among tribes in the Sultanate which includes Sang Jati Dusun, Puak Belait and Puak Bisaya who mainly reside along the Belait and Tutong rivers, as well as in Brunei-Muara District, especially Kampong Bebuluh.”

He also explained how Gendang serves as a window into the Dusun culture with its rhythms, beats and music conveying a variety of purposes and intentions.

“From enforcing customary laws and beliefs, indicating family status, medicinal (for the time), commemorating events and ceremonies such as grieving, expressing gratitude, to being a platform to communicate especially when lost in the forest at night, Gendang plays an important role in the tribe’s daily lives.”

While Gendang played a key role in the past, it has since shifted to being a cultural performance that is slowly losing its purpose and identity.

“There are a lot of tribal dances that have laid dormant, or are rarely exhibited outside of their communities, which indicates an early sign of the erosion of a living culture.”

The erosion also goes against preservation efforts, which is one of the criteria in the United Nations Educational, Scientific and Cultural Organization’s (UNESCO) agenda to save cultures across the world.

“Members of the community have banded together to preserve the unique Gendang experience through practise,” he said.

He added that members practising Gendang have also added a creative touch by interpreting the meanings behind the performances.

With over 30 unique rhythms and melodies associated with Gendang, Eyad Samhan hopes that the practice and performance of Gendang will live on as it provides an opportunity for local and foreign audiences to enjoy and appreciate its unique heritage.