Youth involvement on the agenda

There are 1.8 billion young people around the world today – the largest youth population humanity has ever seen. Thus, it is important that the youth be involved in the process of development and policy-making related to the economy, environment and the like.

This matter was among those highlighted by President of the 76th Session of the United Nations General Assembly (UNGA) Abdulla Shahid during an interview session with local media representatives yesterday, prior to his departure from the Sultanate.

In relation to the importance of young people’s involvement in the United Nations (UN), Abdulla Shahid said that it is also important to have their views and input heard, as youths will inherit what is currently being done.

“They are going to be the decision-makers of tomorrow. It is better to prepare them for the job now than to just dump everything on them tomorrow,” said the UNGA president, adding it is the reason behind him continuing to highlight the importance of youth involvement in the decision-making process.

Since his first visit to the country in March 2020, just before travel restrictions were imposed, Abdulla Shahid commended the Sultanate, under the leadership of His Majesty Sultan Haji Hassanal Bolkiah Mu’izzaddin Waddaulah ibni Al-Marhum Sultan Haji Omar ‘Ali Saifuddien Sa’adul Khairi Waddien, Sultan and Yang Di-Pertuan of Brunei Darussalam, in dealing with the challenges brought up by the pandemic, which include the high vaccination rate in the Sultanate and the return to normalcy in the country. 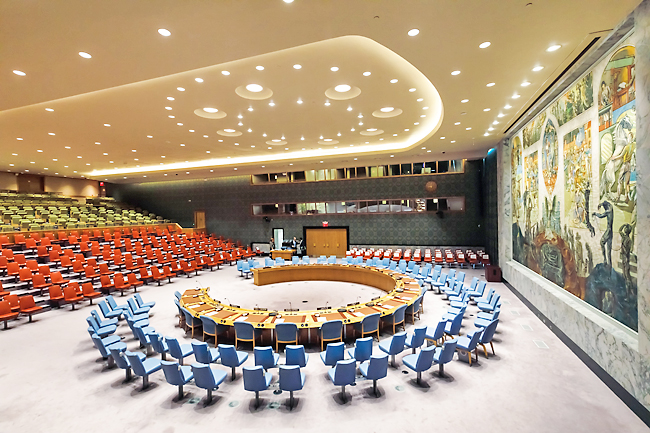 “This is an outstanding achievement given the challenges that all our countries faced during the pandemic,” he added.

The UNGA president also had the opportunity to pay extend his respect for His Majesty.

“Brunei’s commitment to multilateralism is commendable and I’m very happy to have the opportunity to meet young people, young diplomats, the civil society and frontline workers during my visit to understand their perspectives on the challenges that we are facing today.

“Overall, I am greatly in awe of the achievements of Brunei,” he added.

Abdulla Shahid took office at the time when the UN was shifting to a virtual system, as conducting in-person meetings was difficult. He said that for diplomacy, the ability to sit with and talk to each other is important as during the pandemic. They found that LCD screens created barriers and that human warmth is required in diplomacy and multilateralism.

“One of the challenges I faced was to bring the UN to in-person meetings. Of course, the challenges faced in that period were multidimensional,” he said, as the safety of the diplomats and the people who work at the UN Secretariat is of utmost importance.

In addition to the challenges presented by the pandemic since he came into office eight months ago, the UNGA president said climate, food and development crises all continuedto require the agency’s attention.

“Nevertheless, the Ukraine crisis that came about later on took the focus of many of the other issues for a time. But as the president, it is my duty to make sure that the agenda of the UN is continued while giving due focus to the war in Europe,” he said.

In respect to the previous UN Climate Change Conference (COP26), Abdulla Shahid said more could have been achieved, even if it is understood that the conference saw 193 countries come together.

The UNGA president underlined some of the progress made, including keeping the 1.5 degrees agreement alive to ensure the world remains committed to preventing global heating from exceeding 1.5 degrees Celsius above pre-industrial levels, and putting in place the Paris Rule Book along with other environmental agreements.

“There is always room for improvement and better output. That is why I am convening a high level meeting on July 19, a moment for nature to take stock of the climate conferences that we have had the past year and re-orient ourselves to COP27,” said Abdulla Shahid.

He added that more urgency by member states is needed to make everyone understand, noting that the mantra of “no one is safe until everyone is safe” is not limited to the pandemic, but can be extended to the climate crisis. As the UNGA president is also a huge advocate for gender equality, he has pledged that his office, which includes senior Cabinet posts, will be gender balanced. Currently, there are more women in office.

“I think it is important that offices everywhere provide enough space for women to hold not only regular jobs, but also senior positions,” said Abdulla Shahid.

“Of course, there will be challenges. That is also not undermined in the podcasts.

“They always convey the message that ‘these are the challenges that we face as women.

Nevertheless, we have overcome it’,” he said.

Abdulla Shahid is also launching a women’s leadership network with UN women to inspire young women and girls to follow their dreams by breaking down barriers.

He has made a pledge to campaign for the next UN Secretary General to be a woman.

“In the UN, we have a common agenda and one of the targets is for the UN become gender-balanced.

“We launched the agenda just before this trip. I started its implementation and it is now the Secretary General’s turn to make sure that the UN Secretariat becomes gender-balanced,” he said.