With responsibility in mind

KABUL, AFGHANISTAN (AP) – Even before the Taleban barred Afghan women from working at non-governmental groups, their forces visited the office of one local organisation in the capital Kabul several times to check female staff were obeying rules on dress codes and gender segregation.

One female NGO employee told The Associated Press, the women in the office had been extra careful hoping to avoid problems with the Taleban. They wore longer clothes and masks along with headscarf and stayed separate from male co-workers in the workspace and at meals.

She said under conditions of anonymity for fear of reprisals, “We even changed our office arrival and departure times because we didn’t want to be followed” by the Taleban.

That wasn’t enough. On Saturday, Taleban authorities announced the exclusion of women from NGOs, allegedly because they weren’t wearing the headscarf correctly.

The move prompted international aid agencies to halt operations in Afghanistan, raising the possibility that millions of people will be left without food, education, health care and other critical services during the harsh winter months.

The agency coordinating development and relief work in Afghanistan, ACBAR, estimates that many of its 183 national and international members have suspended, stopped or reduced their humanitarian activities and services since the order came into effect.

These members employ more than 55,000 Afghan nationals between them, around a third of whom are women. The agency says female staff play an essential role in NGO activities, providing humanitarian services while also respecting traditional and religious customs. 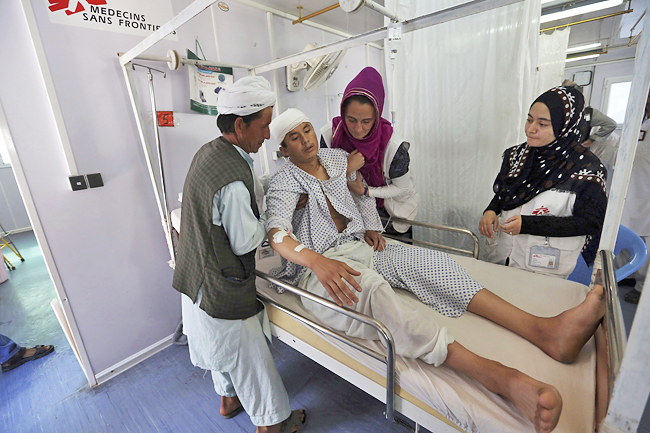 Still, women in some local organisations are trying to keep providing services as much as they can under the radar and paying their staff as long as donor funds continue.

The NGO worker, who has two master’s degrees and three decades of professional experience in Afghanistan’s education sector, wanted to go to the office one last time to collect her laptop but was warned against doing so by her director because there were armed Taleban outside the building.

She is determined to continue helping others, even though she is now working from home.

“It is my responsibility to take the hand of women and girls and provide services for them,” she said. “I will work until the end of my life. This is why I am not leaving Afghanistan. I could have gone but other women look to me for help. If we fail, all women fail.”

Her NGO advises women on entrepreneurship, healthcare, social advice and education. Its activities are done in person in the capital, Kabul, and another province. It has helped 25,000 women in the past six months and hopes to help another 50,000 in the coming months, although how it will do this is unclear, given that most of its permanent and temporary staff are women.

Despite initially promising a more moderate rule, the Taleban have banned girls from middle school, high school and university, restricted women from most employment and ordered them to wear head-to-toe clothing in public. Women are also banned from parks, gyms and other public spaces.

The NGO worker said many educated women left after the Taleban takeover in August 2021, costing Afghan civil society much of its capacity and expertise.

“They have been targetting women from the beginning. Why are they making enemies of women? Don’t they have wives, sisters and mothers?” she said. “The women we help don’t have computers, they don’t have Zoom. It’s hard to do this job without being face-to-face. But I am hopeful we can start our work again in the coming weeks.”

Another Afghan NGO worker anticipates that donor funding will stop because of the drop in female participation. She also spoke on condition she not be identified to protect herself, her colleagues and partner organisations.

She is frustrated but not shocked by the Taleban’s latest order. Her pragmatism leads her to believe in the importance of engaging with the Taleban as the country’s de facto rulers.

“We pay our electricity bills to the Taleban, we get our identity cards from them. More Afghans need to find ways to sit down with them. We need to tell them these issues aren’t foreign-led.”

But others know there are limits to dialogue with the former insurgents.

“They don’t care about the rights that Islam gives to women, it doesn’t work on them,” said a Kabul-based woman who leads a national NGO. “I know the importance of women’s work and its impact on our female beneficiaries.”

She didn’t want to give her personal information for fear of being identified and her father has become more protective of her in the wake of Taleban restrictions.

She heads an organisation that has been working in Afghanistan for decades. It employs 242 people, 119 of whom are women.

Her immediate challenges are prosaic, with only a few hours of electricity a day it is difficult to work from home. She is fortunate enough to live close to the office and can get there quickly and discreetly enough if needed, although her female employees who are further away cannot.

She misses the comfort of working in an office and the collegiality that comes with it.

Enforcement of the ban is so far not universal, she and others said. It is strictest on women in offices in cities but some women in rural areas, particularly those on the ground providing health care and critical humanitarian aid, have been able to operate.

She said provinces outside Kabul and Kandahar, the spiritual birthplace of the Taleban, are more positive about NGO work and that gives her hope.

Her donors are understanding, maintaining the NGO’s salaries and operation costs. Now it is a waiting game, she said, to see how the United Nations (UN) and the rest of the international community responds to the latest Taleban order.

“I just have to survive in this current situation,” she sighs.