GENEVA (AP) – Much of the Alps just don’t look right for this time of year. Sparse snowfall and unseasonably warm winter weather in Europe’s central mountains are allowing grass to blanket hillsides across the region, causing headaches for ski slope operators and aficionados of Alpine white.

Patches of grass, rock and dirt were visible on Monday in some of Europe’s skiing meccas – like Innsbruck in Austria, Villars-sur-Ollon and Crans-Montana in Switzerland, and Germany’s Lenggries and far beyond.

The dearth of snow has revived concerns about temperature upheaval linked to climate change.

On a swath stretching from France to Poland, but with the Alps at the centre, many parts of Europe were enjoying short-sleeve weather.

It’s a sharp contrast to the frigid weather and blizzards in parts of the United States (US) late last year. 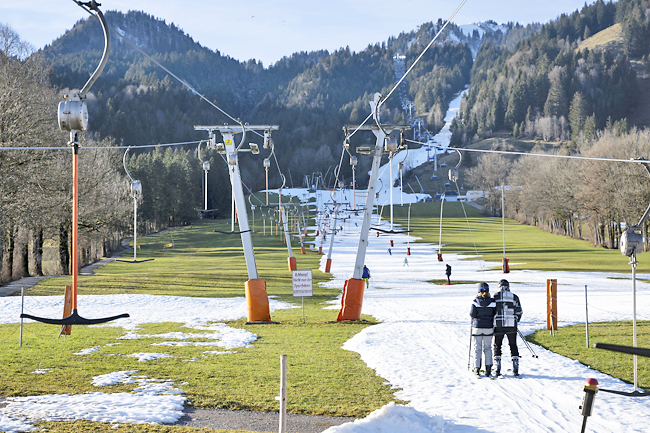 Swiss state forecaster MeteoSuisse pointed to some of the hottest temperatures ever this time of year.

A weather station in Delemont, in the Jura range on the French border, already hit a record average daily temperature of 18.1 degrees Celsius on the first day of the year, over two-and-a-half degrees Celsius higher than the previous record high for January.

Other cities and towns followed suit with records.

MeteoSuisse quipped on its blog: “… this turn of the new year could almost make you forget that it’s the height of winter”.

Forecaster Anick Haldimann of MeteoSuisse said a persistent weather system that brought in warmer air from the west and southwest has lingered, locking in warmer temperatures expected to last through the week.

While slopes above 2,000 metres have gotten snow, lower down, “the order of the day is patience” for skiing buffs, she said.

The shortage has been particularly burdensome around Switzerland’s Adelboden, which is set to host World Cup skiing on Saturday, and generally draws 25,000 fans for a single day of racing. Resorts like these look for such races to offer up bucolic wintertime images to draw amateur skiers, but grassy, brown sides to the course can mar the landscape – and dampen the appeal.

Course director Toni Hadi acknowledged that the race will be run on 100 per cent artificial snow this year. “The climate is a bit changing but what should we do here? Shall we stop with life?” he said by phone, noting that other challenges such as the coronavirus pandemic and war show “life is not easy” these days.

“Everything is difficult – not only preparing a ski slope,” Hadi said.

The start to 2023 picked up where many countries had already left off: Last year was the hottest on record in both Switzerland and France.

More broadly, the United Nations’ World Meteorological Organization said the past eight years are on track to be the eight warmest on record. Its final tally of global temperature figures for 2022 will be released in mid-January.

Next door in France, national weather agency Meteo France said 2022 ended with some of the warmest weather the country has ever experienced at this time of year – capping an exceptionally warm year that saw temperature records were broken and rampant forest fires and drought conditions.

To be sure, the Alps cover a lot of territories and not all of it is bereft of snow: Perhaps counterintuitively, some of the best snowfall has been reported in the Italian Dolomites, to the south of the Swiss Alps.

Early in the ski season, fortunes looked bright for snow lovers: In France, freezing weather into mid-December raised hopes that ski resorts in the Alps, the Pyrenees and elsewhere might see plenty of early snow and the lasting subzero temperatures needed to keep runs open.

But exceptionally warm weather followed, prompting some resorts at lower altitudes to close down as snow cover melted away.

“There was a good start to the season with a cold wave in mid-December which provided some white to pretty much everyone. “Then, last week, there was quite a bit of rain and warm temperatures, so a certain number of runs had to close again,” Laurent Reynaud of the Domaines Skiables de France industry group that represents French ski resorts, lift operators and others, said on C-News television.

Germany too has seen unusually spring-like temperatures – as high as 16 degrees Celsius in parts of the country on Monday. New year’s eve is believed to have been the warmest since reliable records began.

A professor of climate science at the University of Brussels Wim Thiery said the same jet stream that pulled down cold air from the Arctic into the US has fanned warm air from subtropical zones into Europe.

He warned that climate change hasn’t finished its work – unless people cut use of fuels that trap heat in the atmosphere.

“By the end of the century (it’s) just going to be over… skiing in the Alps as we know it,” he said, adding that lower-altitude mountain areas already feel the impact.

“In the future, these problems will get worse, because the snow will continue to melt as long as the climate warms.”