When vegetables are the stars

THE WASHINGTON POST – If you’ve eaten at a small-plates restaurant in the past decade or two, you may have noticed something: At the good ones, vegetables abound.

In fact, I’ve long said that the trend helped break chefs of their protein-at-the-centre-of-the-plate habit, resulting in creative combinations of ingredients – and many more options for vegetarian and vegan diners.

That same phenomenon is at play, for home cooks this time, in Lukas Volger’s new book, Snacks for Dinner. Volger was inspired to write it after a friend made him and his husband lunch in California, breaking up a trip in which they were eating one restaurant meal after another, and serving them a seemingly effortless and informal array of small dishes – a tabbouleh salad from a local maker, farm-fresh carrots, dips, crackers and more – that became their favourite meal of the trip.

This style of eating, of course, is prevalent in plenty of cultures, from Greek mezze and Korean banchan to the Southern groaning board. And as Volger puts it, it’s an ideal way to satisfy plant-based eaters.

“You can just have all these different preparations of vegetables,” he told me in a Zoom call from his home in Brooklyn. “As a vegetarian, that’s what you actually are excited about eating.” 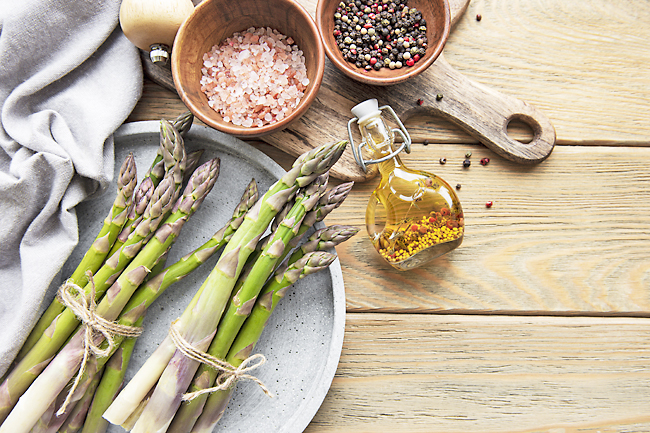 In both cases, the dishes might seem daunting if you’re starting from scratch, but if you get into the habit of making things ahead, and aren’t afraid to rely on high-quality store-bought elements, they couldn’t be quicker to put together.

“I think of snacks for dinner as like a bowl for the dinner table,” he said.

“All these components can come together, and there’s some degree of being able to customise what goes on your plate – or in your bowl.”

I expect to cook my way through Volger’s book, laying out for friends a spread of such dishes as mixed mushroom pate, Brussels sprout chips, nut-and-seed crackers and chewy tofu strips. But the first thing I made for myself and my husband is this asparagus and white bean salad, which beautifully combines seasonal fresh ingredients, a pantry staple and a special touch.

The asparagus, when it’s fresh from the farmers market, can stay raw, as does watercress.

The beans can come from a can – or your fridge or freezer if you cooked them from dried and have them stored away.

The special touch is a cheddar frico, a flavourful crisp that you make by cooking shredded cheese until the oil separates and it lightly browns, magically firming up into a disk as it cools.

I had previously made it only from Parmesan or Pecorino and did it in the oven, arranging the grated cheese into small piles that turn into crispy circles, perfect for laying on soup.

(Of, if you form them into a cup while they’re still warm, they become a vehicle for appetiser-sized portions of spreads, dressed greens or bites of anything else you like).

In this recipe, you make the frico in one big circle in a non-stick skillet and use sharp cheddar, sprinkled with freshly ground black pepper, to make a tangy, delectable, crunchy crouton for the fresh vegetable salad.

Whenever possible, I like to offer readers a vegan option. But I was sceptical about whether you could make a frico with vegan cheese shreds, which usually include starches and which I doubted would allow for the oil separation required for the cheese to dry out, fry and crisp up. Sure enough, the first time I tried it, the vegan shreds were unmoved – literally – by the skillet’s heat.

But all I had to do was drizzle a couple tablespoons of oil over the shreds, which melted together, then pour off any excess oil once the cheese browned.

The result: a vegan frico with all the lacy texture of the dairy one. I tossed the asparagus, beans and watercress in a lemony dressing, broke up the frico on top, and served it to my husband with crackers and hummus on the side.

It tasted like exactly what I wanted to eat, and had all the makings of a seemingly effortless, snacks-for-dinner party.

FRESH ASPARAGUS WITH WHITE BEANS AND CRISPY CHEDDAR
When asparagus is fresh and in season, you don’t need to cook it. Just cut it thinly or shave it, and its wonderfully juicy, crunchy texture will be perfect for spring salads. This simple recipe also features cannellini beans, plus a cheddar frico in place of croutons.

DIRECTIONS
Heat a medium non-stick skillet over medium heat. Sprinkle the cheese all over the surface in an even layer, and season with a few grinds of black pepper. Let the cheese melt and then bubble as the oils separate from the solids and the cheese darkens slightly to a pale brown colour, four to six minutes. Turn off the heat and let the cheese cool for a few minutes, until it turns crisp. Using a thin spatula, loosen it from the pan, transfer to a plate and let cool completely. Break into pieces.

In a small bowl, whisk together the oil, lemon zest and juice, honey or agave and salt. Taste, and add more salt and/or honey as needed.

Taste the asparagus: If you’re working with less-fresh asparagus that you don’t like the taste of raw, in a large skillet over medium-high heat, heat one tablespoon of oil until shimmering.

Add the asparagus and saute the slices until just tender, one to two minutes.

In a large bowl, combine the asparagus, beans and watercress or arugula. Toss with the dressing to coat. Just before serving, top with the frico.