What it takes to invent a new musical instrument

THE WASHINGTON POST – On a Sunday night in Los Angeles in 2011, composer and instrumentalist AR Rahman took the stage before the assembled glitterati and millions of others watching the Academy Awards on TV. Then he and singer Florence Welch performed If I Rise, his Oscar-nominated song from the film 127 Hours. On the other end of the telecast, at a TV in rural Maryland, Tim Meeks was girding for overnight success.

When he’d heard about Rahman’s upcoming performance – giving a prime-time spotlight to the musical instrument Meeks invented and started selling in 2007, a hybrid piano-guitar called the harpejji – he’d enlisted a few friends to help handle the phones the next day. “But that’s not how it works,” Meeks told me. The anticipated run on harpejjis – perhaps by curious musicians – didn’t happen. It didn’t materialise even when Stevie Wonder played Superstition on a harpejji in 2012 at the Billboard Music Awards. Or in 2015, when he played Ain’t No Sunshine at the Rock & Roll Hall of Fame induction of Bill Withers. It was going to take more time, more patience.

But now the new instrument, made by the family business, Marcodi Musical Products, headquartered in the basement of Meeks’s home in Glen Arm, Maryland, has seen a spike in sales.

The company has sold about 500 harpejjis since 2019, the same number sold in the previous 12 years combined – no doubt helped by ongoing exposure and public adoration from Wonder, as well as musicians like Harry Connick Jr, who played a harpejji at last year’s lighting of the Rockefeller Centre Christmas tree, and British wunderkind Jacob Collier, who has used his to serenade 1.5 million Instagram followers.

The harpejji, which sells for USD3,000 to USD6,000, is long and flat and electrified, with strings stretched over frets along a wooden body. Beneath them are black and white markers that correspond to the notes on a piano. 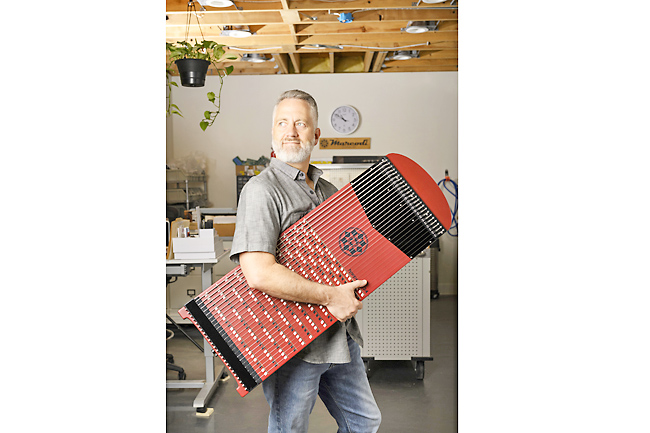 Horizontally the notes run in whole tones; vertically they’re in half-tones. A note sounds only when a string touches a fret, and that’s done with any number of fingers at once. Those active strings also can be bent, shaken or strummed.

Meeks, a keyboard player, had been looking for a more expressive way to play without abandoning his piano prowess. In the late 1990s and early 2000s he came across the work of inventors exploring stringed tapping instruments, such as Emmett Chapman’s Chapman Stick and John Starrett’s StarrBoard.

The latter was close to Meeks’ vision, and he bought one of Starrett’s prototypes and began to tinker. When the only original part left was the wood, a new iteration had emerged, Meeks said, and he has five patents related to its design and technical components.

“The harpejji is an incremental sort of thing,” he told me. He isn’t the first to conjure this combination, but this particular body design and bundle of modifications “just work for musicians”.

Musical innovations often stem from hybridisation, said Krystal Klingenberg, a music curator at the National Museum of American History. Since they’re created to solve a problem, “instruments don’t just follow these linear progressions of development”, she told me.

Even instruments that may seem static over the past century or two are constantly evolving to chase ambitions for sound or utility or sustainable materials, said Arian Sheets, the curator of stringed instruments at the National Music Museum in Vermillion, South Dakota.

She points to the museum’s trumpet collection, which is a fun-house-mirror array of horns, including a jazzophone, a trumpet that’s shaped like a saxophone and has two bells.

Adaptations are mostly for a happy relative few, but occasionally become mainstream.

Klingenberg and Sheets mention technological breakthroughs like the electric guitar, the Moog synthesiser and hip-hop’s reimagining of the turntable.

The harpejji began to intrigue Meeks’ friends, and he decided to go into business.

He had some know-how: At that point, he was developing consumer products for Polk Audio.

What he had less of was time and money. He and his wife, Joy, a vocalist, were building a family of what’s now six children who range in age from 23 to eight, and Joy took on the brunt of the duties at home so Meeks, 49, could see this through.

Then Stevie Wonder found Meeks at a trade show in January 2012, and soon after Meeks and Joy were headed to Los Angeles to deliver Wonder’s harpejji. They spent three days with him as he learnt to play.

It was at Wonder’s fingertips that Jacob Collier first saw the instrument in a video. “I was a little perplexed and bemused, because I’d never seen something quite like it before,” the 27-year-old, five-time Grammy winner told me.

“Another thing that really blew my mind,” he said, “is after introducing it into (my musical) diet, I just found myself playing new stuff on the piano and the guitar because the logic of it had unlocked this new sort of system”.

By 2016, Meeks left his job to run Marcodi full time. Joy now handles customer service and sales, working alongside four of their children and two other shop employees. Since 2020, Meeks has been both chief executive of Marcodi and president of Wingard, a metal parts manufacturer in Baltimore.

Later this year they’re moving to a house nearby that will triple the size of the workshop.

Meeks has ideas for other products, including effects pedals. And the harpejji is no more static than any other instrument. Like music itself, it continues to evolve.