PRESTONBURG, KENTUCKY (AP) – Some residents of Appalachia returned to flood-ravaged homes and communities on Saturday to shovel mud and debris and to salvage what they could, while Kentucky’s governor said search and rescue operations were ongoing in the region swamped by torrential rains days earlier that led to deadly flash flooding.

Rescue crews were continuing the struggle to get into hard-hit areas, some of them among the poorest places in America. Dozens of deaths have been confirmed and the number is expected to grow.

In the tiny community of Wayland, Phillip Michael Caudill was working on Saturday to clean up debris and recover what he could from the home he shares with his wife and three children.

The waters had receded from the house but left a mess behind along with questions about what he and his family will do next.

“We’re just hoping we can get some help,” said Caudill, who is staying with his family at Jenny Wiley State Park in a free room, for now.

Caudill, a firefighter in the nearby Garrett community, went out on rescues around 1am last Thursday but had to ask to leave around 3am so he could go home, where waters were rapidly rising.

“That’s what made it so tough for me,” he said. 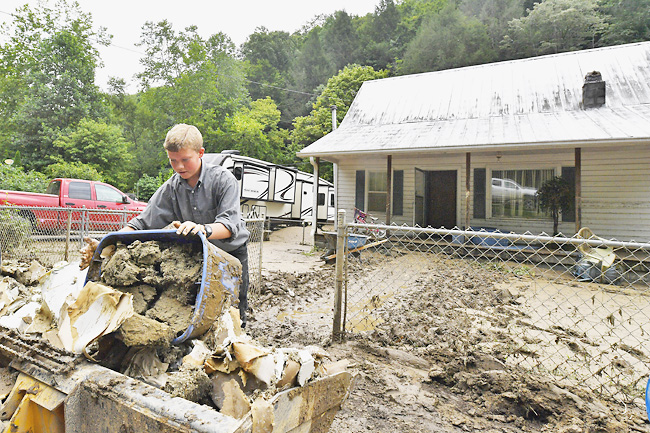 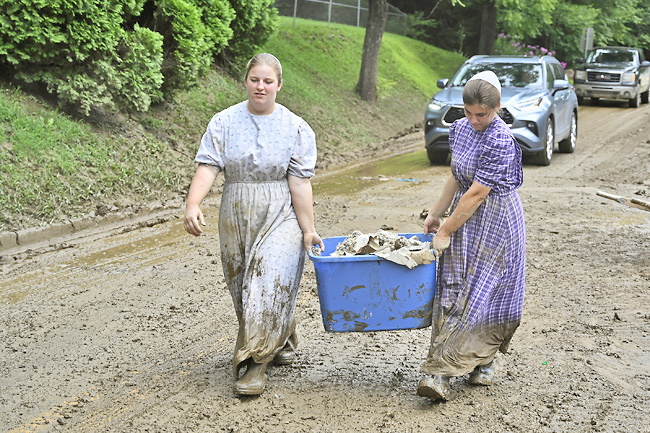 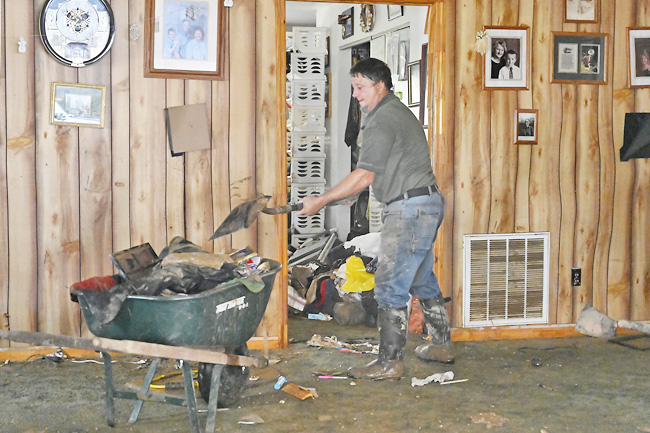 “Here I am, sitting there, watching my house become immersed in water and you got people begging for help. And I couldn’t help,” because he was tending to his own family.

The water was up to his knees when he arrived home and he had to wade across the yard and carry two of his kids out to the car. He could barely shut the door of his SUV as they were leaving.

In Garrett on Saturday, couches, tables and pillows soaked by flooding were stacked in yards along the foothills of the mountainous region as people worked to clear out debris and shovel mud from driveways and roads under now-blue skies.

The two were able to rescue their dog, CJ, but fear the damages to the home are beyond repair.

Retired coal miner Hubert Thomas said his entire life savings was invested in his home.
“I’ve got nothing now,” he said.

EMT Harvey Thomas said he fell asleep to the sound of light rain, and it wasn’t long until his uncle woke him up warning him that water was getting dangerously close to the house.

“It was coming inside and it just kept getting worse,” he said, “like there was, at one point, we looked at the front door and mine and his cars was playing bumper cars, like bumper boats in the middle of our front yard”.

As for what’s next, Harvey Thomas said he doesn’t know, but he’s thankful to be alive.

“Mountain people are strong,” he said. “And like I said it’s not going to be tomorrow, probably not next month, but I think everybody’s going to be okay. It’s just going to be a long process.”

At least 25 have people died – including four children – in the flooding, Kentucky’s governor said on Saturday.

“We continue to pray for the families that have suffered an unfathomable loss,” Governor Andy Beshear said. “Some having lost almost everyone in their household.”

Beshear said the number would likely rise significantly and it could take weeks to find all the victims of the record flash flooding.

Crews have made more than 1,200 rescues from helicopters and boats, the governor said.
“I’m worried that we’re going to be finding bodies for weeks to come,” Beshear said during a midday briefing.

The rain let up early on Friday after parts of eastern Kentucky received between 20 to 27 centimetres over 48 hours.

But some waterways were not expected to crest until Saturday. About 18,000 utility customers in Kentucky remained without power Saturday, poweroutage.us reported.

It’s the latest in a string of catastrophic deluges that have pounded parts of the United States (US) this summer, including St Louis earlier this week and again on Friday.

As rainfall hammered Appalachia this week, water tumbled down hillsides and into valleys and hollows where it swelled creeks and streams coursing through small towns.

The torrent engulfed homes and businesses and trashed vehicles. Mudslides marooned some people on steep slopes.

US President Joe Biden declared a federal disaster to direct relief money to more than a dozen Kentucky counties.

The flooding extended into western Virginia and southern West Virginia.

Governor Jim Justice declared a state of emergency for six counties in West Virginia where the flooding downed trees, power outages and blocked roads. Virginia Governor Glenn Youngkin also made an emergency declaration, enabling officials to mobilise resources across the flooded southwest of the state.

Last month, heavy rain on mountain snow in Yellowstone National Park triggered historic flooding and the evacuation of more than 10,000 people. In both instances, the rain flooding far exceeded what forecasters predicted.

Extreme rain events have become more common as climate change bakes the planet and alters weather patterns, according to scientists.

That’s a growing challenge for officials during disasters, because models used to predict storm impacts are in part based on past events and can’t keep up with increasingly devastating flash floods and heatwaves like those that have recently hit the Pacific Northwest and southern Plains.

“It’s a battle of extremes going on right now in the US,” said University of Oklahoma meteorologist Jason Furtado. “These are things we expect to happen because of climate change… A warmer atmosphere holds more water vapour and that means you can produce increased heavy rainfall.”