CARACAS (AFP) – Judith, a 90-year-old great-grandmother in Venezuela, examines a stuffed animal meticulously in her hands before finding a hole.

“This one needs surgery,” she said, adding “we’re going to sew it up here.”

Judith is one of 40 volunteers at what amounts to a hospital for stuffed toys. Since being founded in 2017, the hospital has delivered 30,000 recycled toys to schools and associations in poor neighbourhoods.

It operates out of the Caracas house of founder Lilian Gluck, 63, who receives hundreds of toys a week to repair.

“The stuffed toy hospital operates like a hospital, patients come in from the street,” said Gluck. “These patients are sewn, washed, fixed, if they are missing eyes we give them eyes, their hair is combed, they are given a beautiful ribbon and a card with a very nice message to take care of them and give them as gifts to other children when they grow up.”

In one room, more than 300 stuffed toys are awaiting repairs. 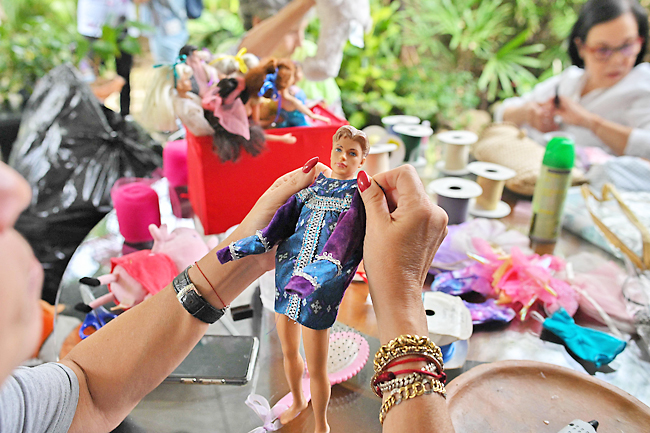 In the workshop room, volunteers share out the tasks. Some wash the toys and carefully sew them while others paint damaged dolls.

“I love to see them (the children) when we arrive and they know they are going to get a toy. You can’t imagine their eyes. It’s a real delight, and it’s what is needed,” Judith said.

Each stuffed animal gift is carefully packaged. Every detail counts, said Gluck, who believes she is bringing dignity to vulnerable children by giving them toys in good condition.

In a country where 76 per cent of the population lives in extreme poverty, according to the private Catholic University of Andres Bello, Gluck believes what she is doing is equally as important as helping the poor.

“We support and accompany many people who bring food, but we cannot be so simplistic. In this country people need to continue having fun,” she said.

Paediatrician Maria Jose Rodriguez began volunteering with the association after patients in her clinic received donations.

“Obviously, you’re not going to get a child out of malnutrition with a stuffed animal, but play is a basic need and children have the right to play,” said the 47-year-old.

In a primary school in Petare, the largest slum in the country, 10-year-old Elias Barazarte has just received a stuffed toy with a bag, a box of crayons and some sweets.

“It doesn’t matter that it’s recycled as long as you can use and play with it,” he said joyfully.