TOKYO (AFP) – From laser beams and wooden satellites to galactic tow-truck services, start-ups in Japan are trying to imagine ways to deal with a growing environmental problem: space debris.

Junk like used satellites, parts of rockets and wreckage from collisions has been piling up since the space age began, with the problem accelerating in recent decades.

“We’re entering an era when many satellites will be launched one after another. Space will become more and more crowded,” said general manager at Astroscale Miki Ito, a company dedicated to “space sustainability”.

“There are simulations suggesting space won’t be usable if we go on like this,” she told AFP.

“So we must improve the celestial environment before it’s too late.”

The European Space Agency (ESA) estimates that around one million pieces of debris larger than a centimetre – big enough to “disable a spacecraft” – are in Earth’s orbit. 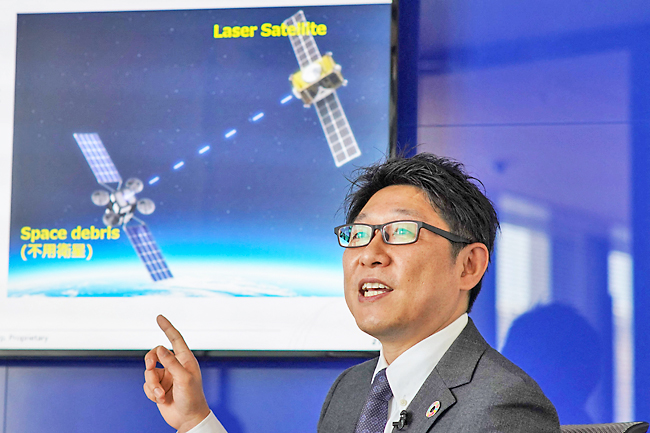 They are already causing problems, from a near-miss in January involving a Chinese satellite, to a five-millimetre hole knocked into a robotic arm on the International Space Station last year.

But “it’s an issue that raises real concerns about the sustainable use of space”.

With satellites now crucial for GPS, broadband and banking data, collisions pose significant risks on Earth. Tadanori Fukushima has seen the scale of the problem in his job as an engineer with Tokyo-based satellite operator and broadcaster SKY Perfect JSAT.

“A stationary satellite would get roughly 100 ‘debris-approaching’ alerts a year,” he told AFP.

Fukushima launched an in-house start-up in 2018 and envisions using a laser beam to vaporise the surface of space debris, creating a pulse of energy that pushes the object into a new orbit.

The irradiating laser means there’s no need to touch any debris, which is generally said to move about 7.5 kilometres per second – much faster than a bullet.

For now, the project is experimental, but Fukushima hopes to test the idea in space by spring 2025, working with several research institutions.

Japanese firms, along with some in Europe and the United States (US) , are leading the way on developing solutions, according to Fukushima.

Some projects are further along, including Astroscale’s space “tow-truck”, which uses a magnet to collect out-of-service satellites.

“If a car breaks down, you call a tow-truck service. If a satellite breaks down and stays there, it faces the risk of collision with debris and needs to be collected quickly,” Ito explained.

The firm carried out a successful trial last year and imagines one day equipping customer satellites with a “docking plate” equivalent to a tow-truck’s hook, allowing collection later on.

Astroscale, which has a contract with the ESA, plans a second test by the end of 2024 and hopes to launch its service soon after.

Other efforts approach the problem at the source, by creating satellites that don’t produce debris.

Kyoto University and Sumitomo Forestry envisage a wooden satellite that goes into orbit in a rocket and burns up safely when it plunges to Earth.

That project is also in its infancy – in March, pieces of wood were sent to the International Space Station to test how they respond to cosmic rays.

Space agencies have their own programmes, with JAXA focussing on large debris over three tonnes.

And internationally, firms including US-based Orbit Fab and Australia’s Neumann Space have proposed ideas such as in-orbit refuelling to extend the life of satellites.

The problem is complex enough that a range of solutions will be needed, said JAXA’s Yamamoto.

“There is no panacea.”