MELBOURNE (AFP) – Reigning US Open champion Emma Raducanu crashed out of the Australian Open in the second round yesterday as she struggled with blisters on her serving hand.

The 19-year-old, making her debut at Melbourne Park, looked on track when she raced to a 3-0 lead in the opening set against Montenegro’s Danka Kovinic.

But the 17th seed then lost five games in a row and needed a medical timeout for treatment on her right hand.

Despite battling back she couldn’t stop Kovinic winning 6-4, 4-6, 6-3 on Margaret Court Arena.

The result put Kovinic, the world number 98, into the third round of a major for the first time.

She will now play two-time Grand Slam winner Simona Halep, seeded 14, who defeated Brazilian Beatriz Haddad Maia in two straight sets yesterday, for a place in the fourth round.

“I really enjoyed it out there. It was a nice experience to play Emma and make it to the third round of a Grand Slam for the first time,” she said.

“Emma is a such a talent and just glad I showed I can play at her level.”

It was only Kovinic’s fourth win over a top-20 player and the first on hardcourts, with the other three all on clay.

Raducanu applied pressure on the Kovinic serve right away, working a break point that went in her favour. A comfortable hold followed then Kovinic’s sixth unforced error handed the teenager three break points to go 3-0 clear.

But the Briton lost focus and loose shots from the baseline allowed her opponent to claw a break back. 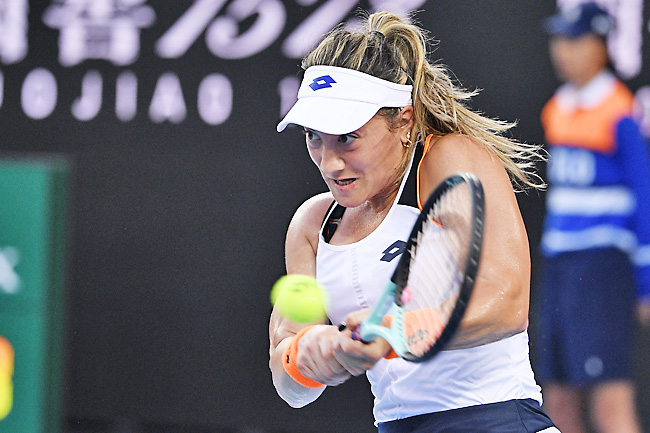