LVIV, UKRAINE (AFP) – To get into the Potocki Palace, a gem of Ukrainian architecture, you have to show your ID, slip past the armed soldiers and duck under some scaffolding.

All that, just to see some bare picture rails.

Life has resumed a semblance of quasi-normality in Lviv, since Russian forces pulled out of the Kyiv region to focus their offensive on the south and east. But museums in the self-styled capital of culture only dare open their doors a chink, convinced the invaders will pillage Ukraine’s culture as they have its villages.

“We’d like to open up a bit more but security is complicated,” explained deputy director of the Lviv National Gallery Vassyl Mytsko.

“How can we be sure the Russians aren’t just gathering their strength again so they can chuck all their rockets at us?”

The staff of the National were taken by surprise when Russia invaded on February 24.

“We didn’t think the strikes would get this far” and threaten Lviv, Mytsko said. 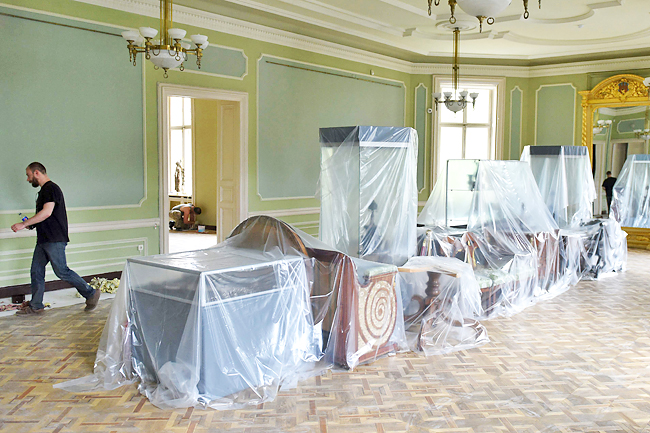 The museum curators were “stunned” at first but soon got to work wrapping up sculptures and paintings – some of which are worth millions – and squirreling them to safety in secret locations, where they remain to this day.

The Potocki, opened exclusively for AFP, is no exception.

Workers are using the absence of its precious paintings to give the bare walls a coating of bright red paint following the removal of works including Georges de la Tour’s Payment of Taxes.

Since early May, two of the National’s other sites more than an hour away from Lviv have started re-opening to the public. On occasions.

There is no question, however, of the museums in the city itself unlocking their doors “until there is major change – politically or on the ground”, Mytsko said.

Kremlin troops have already bombed a museum near Kyiv dedicated to artist Maria Primachenko and another in Kharkiv about philosopher Grigori Skovoroda, so they remain a threat to Lviv, he said, adding: “They want to destroy Ukraine’s identity and its European roots.”

Head of the Lviv History Museum Roman Shmelik is just as suspicious.

The museum’s collection is spread across 10 buildings, some dating back to the 16th Century, but only two opened on May 1 – one to let people use its cafe, the other for a children’s exhibition. The buildings were otherwise empty, their treasures under wraps elsewhere.

Shuddering, Shmelik recalled how the Soviets had taken control of Lviv in the Second World War and turned the museum into a “propaganda tool”.

“They took out the permanent exhibition and replaced it with one glorifying the Red Army,” he spluttered, still indignant.

Right across the country, the Soviets “acted like bulldozers”, concurred a professor of architecture at Lviv University Mykola Bevz, who was instrumental in obtaining UNESCO heritage status for his city.

Lviv, with its 3,000 monuments, was nonetheless better able than other cities to fend off Soviet “urban planning”, he opined.

Firstly, because the “cradle of Ukrainian patriotism” only belatedly fell into Soviet hands – the east of Ukraine became part of the USSR in 1918 – and secondly, because “there was an intellectual movement that mounted a skilful resistance”. In addition, the citizens of Lviv succeeded in saving a historic part of the city that was to be razed to make way for a huge square for military parades, Bevz added.

Mytsko said his predecessor at the National, Boris Voznitsky, had, by skilful ruses, succeeded in enriching the museum’s collections of religious works, despite the official Soviet policy of atheism.

Shmelik, who identifies with these defenders of Ukrainian heritage, stressed the importance of protecting Lviv’s museums “to contribute to the formation of our national identity”.

His response to Russian President Vladimir Putin’s assertion that there is no such thing as Ukrainian identity because Russians and Ukrainians are the same people?

“We’re Ukrainian and we have nothing to prove,” he sniffed.