In a statement, the Ministry of Marine Affairs and Fisheries said two Malaysian-flagged boats with registration PKFB 1269 and PKFB 1280 were detected in the Straits of Melaka on June 8.

“This demonstates our commitment to eradicate illegal fishing as well as protecting marine and fishery resources,” said Director-General of Marine and Fisheries Resources Surveillance Adin Nurawaluddin.

He said the boats and the seized items were taken to the Belawan Fishing Port, in Medan, North Sumatra for further investigation.

The agency has detained 79 foreign and local illegal boats so far this year, including eight Malaysian-flagged boats. 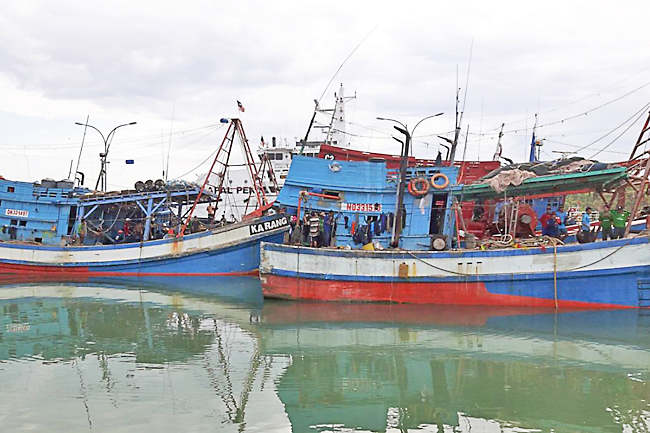 In another development, the Indonesia Consulate General (Kota Kinabalu office) is considering setting up a liaison office on this island to facilitate travel documentation for more than 2,000 Indonesian migrant workers.

Its consulate general, Rafail Walangitan said this, however, would depend on the urgency to facilitate the processing of documents like passports, stay permits and work permits.

“If we are unable to establish the liaison office, we can deploy our team to this island to help ease the process for our migrants here,” he said after paying a courtesy call on Labuan National Security Council (NSC) Director Mohd Hafiez Mohd Daud.

Rafail said (before the establishment of liaison office) the Indonesia Consulate General office in Kota Kinabalu would help speed up the travel documentation for Indonesians in Labuan travelling to the Kota Kinabalu office for renewal of passport and related documents.

“The process (renewal or for new passport) will usually take three days, hence, we can consider handling Indonesian immigration affairs (from Labuan) as a special case with a shorter processing time,” he said.

According to him, the over 2,000 Indonesians in Labuan are working in various sectors like services (including as maids), construction and oil and gas. “Importantly, we want our Indonesian migrants in Labuan to obey Malaysian laws and refrain from involving in any unlawful activities,” he said.