THE WASHINGTON POST – Identical twins Brittany and Briana Deane were inseparable as girls growing up in Delaware. Their lives were so intertwined, in fact, that they hoped to one day fall in love with identical twin brothers and marry them.

So when the two sets of siblings met in 2017 at – where else? – the annual Twins Days Festival in Twinsburg, Ohio, they all decided this could be their perfect match. The Deanes and the Salyerses spent a year dating, and when all four were sure they had found their match, they returned to the festival and got married right there, in matching outfits.

And if that weren’t enough, the two couples – who now live in a house they share in Bedford County, Virginia – went back to the twins festival earlier this month, this time with their sons, born about five months apart.

“We met at the festival and married at the festival, and we’ve made lots of friends there,” said Briana, 35, who is five minutes older than Brittany.

“It was important to us that our incredible twin family at the festival meet the boys,” Briana said about the babies, cousins Jett and Jax Salyers. 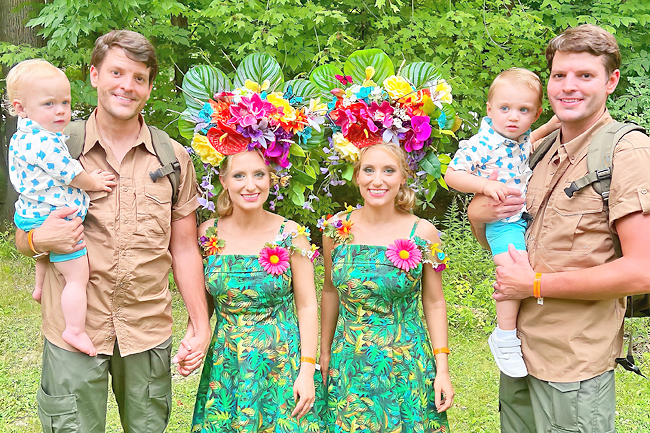 The boys are cousins, but because their parents are twins who married twins, their genetics are similar to those of siblings, Briana said. The Salyers’ unusual marriage is known as a quaternary marriage, and their sons are known as quaternary twins.

Given who they are, it only makes sense they would find a classification of twindom for their sons, who look alike and often dress alike.

They acknowledge that their lifestyle would not be for everyone, but they have fully embraced their sibling status and say they’ve never known anything else.

“It’s a pretty unique situation, but to us it seems really natural,” Briana said, noting that such relationships are so rare that it’s difficult to find statistics about similar marriages worldwide.

At the three-day Twinsburg gathering earlier this month, many of the twins and triplets were already familiar with the two pairs of Salyers, who have been making headlines since their August 2018 wedding. Brittany and Briana were also featured in the TV show Extreme Sisters.

The identical duos first met at the festival when Josh and Jeremy Salyers, now 38, spotted Brittany and Briana after a party in the hotel conference centre, Josh said.

“When we stopped to talk, there was an immediate connection,” he said, adding that it was the first time he and his twin had been to the festival.

“We exchanged phone numbers with each other and started to talk regularly via phone and social media,” he said.

Josh said he and Jeremy began to travel between the home they shared in Tennessee and Brittany and Briana’s home near Twin Lakes State Park in Virginia to get to know the sisters better. Soon, they were falling in love.

“Both of us always knew that we wanted to marry twins,” said Jeremy, noting that with their close relationship, it just made sense.

“We’d decided that if we couldn’t find twins to marry, then we just wouldn’t get married,” he said.

He said he and Josh weren’t surprised to learn that Brittany and Briana felt the same way.

“Ever since we were little girls, we’d always dreamed of marrying identical twin brothers,” Briana said.

“It seemed like a perfect next step because it really does take a pair of twins to understand the special relationship of twins,” Brittany added.

The Salyers brothers proposed together, naturally, on February 2, 2018, at Twin Lakes State Park, and Brittany and Briana recalled saying yes at the same time.

“We each got down on our knees (to propose),” Josh said, adding that he and Jeremy gave the sisters identical diamond engagement rings.

“It couldn’t have been more romantic,” said Briana, noting that the brothers had asked her and her sister to dress alike on the ruse that they’d be filming a commercial.

“The date that they proposed to us was perfect,” Brittany added. “You can’t do better than 02-02 to represent a double proposal and a double marriage.”

After their wedding at the twins festival, the four Salyerses eventually moved in together in a house at Smith Mountain Manor, a lakeside wedding venue they own and run as a family business, located about an hour from Roanoke. Josh and Jeremy are the primary operators of Smith Mountain Manor, while Brittany and Briana are both attorneys who work four days a week for a law firm in Roanoke.

“We do everything together, so it just made sense that we would all live together,” Jeremy said.

“We have the fortune of combining resources in an environment that allows everyone time to work, explore creative projects and time to parent,” Briana added.

“Each of us gets to spend time with the children, one’s own spouse, one’s own twin and with the group as a whole,” she said.

The sisters were devastated when they each suffered miscarriages more than a year into their marriages, Brittany said.

“It was one of the most painful things I had gone through, both physically and emotionally,” she said. “Then to watch my twin go through a miscarriage was painful as well, and it was also hard for Josh and Jeremy.”

When they both became pregnant again five months apart, they shared their journeys with their Instagram followers.

Since the birth of their sons, their days are now a busy routine of wedding planning, diaper changing and cooking meals together, Josh said.

“It’s important that we all get along – and we do,” he said. “That’s what keeps everything afloat.”

Having plenty of space for alone time is important, too, Jeremy said.

“Probably the best part about our situation, though, is that if you’re upset, you don’t have to be alone,” he said. “There’s always somebody to talk to.”

Both couples said they might have more children in the future, but they’re not in any rush.

Might they have twins themselves one day? It’s something they’d embrace, obviously. But first, they have something else on the horizon.