DELTA, UTAH (AP) – The coal plant is closing. In this tiny Utah town surrounded by cattle, alfalfa fields and scrub-lined desert highways, hundreds of workers over the next few years will be laid off – casualties of environmental regulations and competition from cheaper energy sources.

Yet across the street from the coal piles and furnace, beneath dusty fields, another transformation is underway that could play a pivotal role in providing clean energy and replace some of those jobs.

Here in the rural Utah desert, developers plan to create caverns in ancient salt dome formations underground where they hope to store hydrogen fuel at an unprecedented scale.

The undertaking is one of several projects that could help determine how big a role hydrogen will play globally in providing reliable, around-the-clock, carbon-free energy in the future.

What sets the project apart from other renewable energy ventures is it’s about seasonal storage more than it’s about producing energy. The salt caves will function like gigantic underground batteries, where energy in the form of hydrogen gas can be stored for when it’s needed.

“The world is watching this project,” said co-founder of Magnum Development Rob Webster, one of the companies spearheading the effort. “These technologies haven’t been scaled up to the degree that they will be for this.” 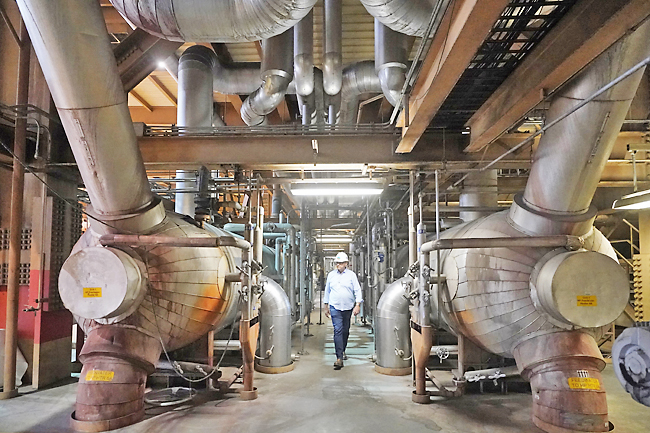 In June, the United States (US) Department of Energy announced a USD504 million loan guarantee to help finance the “Advanced Clean Energy Storage” project – one of its first loans since President Joe Biden revived the Obama-era programme known for making loans to Tesla and Solyndra. The support is intended to help convert the site of a 40-year-old coal plant to a facility that burns cleanly-made hydrogen by 2045.

Amid polarising energy policy debates, the proposal is unique for winning support from a broad coalition that includes the Biden administration, Senator Mitt Romney and the five other Republicans who make up Utah’s congressional delegation, rural county commissioners and power providers. Biden was set to announce new actions on climate change during an event in Massachusetts at a former coal-fired power plant that is shifting to a renewable energy hub.

Renewable energy advocates see the Utah project as a potential way to ensure reliability as more of the electrical grid becomes powered by intermittent renewable energy in the years ahead.

In 2025, the initial fuel for the plant will be a mix of hydrogen and natural gas. It will thereafter transition to running entirely on hydrogen by 2045. Sceptics worry that could be a ploy to prolong the use of fossil fuels for two decades.

Others say they support investing in clean, carbon-free hydrogen projects, but worry doing so may actually create demand for “blue” or “grey” hydrogen.

Those are names given to hydrogen produced using natural gas. “Convincing everyone to fill these same pipes and plants with hydrogen instead (of fossil fuels) is a brilliant move for the gas industry,” said Justin Mikula, a fellow focussed on energy transition at New Consensus, a think tank.

Unlike carbon capture or gray hydrogen, the project will transition to ultimately not requiring fossil fuels. Chevron in June reversed its plans to invest in the project.

A company spokesman Creighton Welch said it didn’t reach the standards by which the oil and gas giant evaluates its investments in “lower carbon businesses”.

As utilities transition and increasingly rely on intermittent wind and solar, grid operators are confronting new problems, producing excess power in winter and spring and less than needed in summer.

The supply-demand imbalance has given rise to fears about potential blackouts and sparked trepidation about weaning further off fossil fuel sources.

This project converts excess wind and solar power to a form that can be stored. Proponents of clean hydrogen hope they can bank energy during seasons when supply outpaces demand and use it when it’s needed in later seasons.

Here’s how it will work: solar and wind will power electrolyzers that split water molecules to create hydrogen. Energy experts call it “green hydrogen” because producing it emits no carbon. Initially, the plant will run on 30 per cent hydrogen and 70 per cent natural gas. It plans to transition to 100 per cent hydrogen by 2045.

When consumers require more power than they can get from renewables, the hydrogen will be piped across the street to the site of the Intermountain Power Plant and burned to power turbines, similar to how coal is used today. That, in theory, makes it a reliable complement to renewables.

Many in rural Delta hope turning the town into a hydrogen epicentre will allow it to avoid the decline afflicting many towns near shuttered coal plants, including the Navajo Generating Station in Arizona.

But some worry using energy to convert energy – rather than sending it directly to consumers – is costlier than using renewables themselves or fossil fuels like coal.

Though Michael Ducker, Mitsubishi Power’s head of hydrogen infrastructure, acknowledges green hydrogen is costlier than wind, solar, coal or natural gas, he said hydrogen’s price tag shouldn’t be compared to other fuels, but instead to storage technologies.

For Intermountain Power Agency, the hydrogen plans are the culmination of years of discussions over how to adapt to efforts from the coal plant’s top client – liberal Los Angeles and its department of water and power – to transition away from fossil fuels. Now, resentment toward California is sweeping the Utah community as workers worry about the local impacts of the nation’s energy transition and what it means for their friends, families and careers.

“California can at times be a hiss and a byword around here,” city councilman Nicholas Killpack, one of Delta’s few Democrats, said.

“What we all recognise is we have to do what the customer wants. Everyone, irrespective of their political opinion, recognises California doesn’t want coal. Whether we want to sell it to them or not, they’re not going to buy it.”

The coal plant was built in the wake of the 1970s energy crisis primarily to provide energy to growing southern California cities, which purchase most of the coal power to this day.

But battles over carbon emissions and the future of coal have pit the states against each other and prompted lawsuits. Laws in California to transition away from fossil fuels have sunk demand for coal and threatened to leave the plant without customers.

The races saw campaign signs plastered throughout town and tapped into angst about the multimillion-dollar plans and how they may transform the job market and rural community’s character.

“People are fine with the concept and the idea of it being built,” Trevor Johnson, one of the GOP primary winners, said, looking to where the hydrogen facility will be. “It’s just coal power is cheap and provides lots of good jobs. That’s where the hang-up is.”