Towards the spiritual path

The declaration and confession of faith in Islam has transformed two Muslim converts spiritually and provided a source of enlightenment to their life.

Airolvin Furqan bin Sisir from Kampong Bebuloh, who embraced Islam in 2018 said that Islam gives him guidance and provides a pathway that has lit up his life.

“I joined the advanced stages of the knowledge enhancement scheme before and after the COVID-19 pandemic, from 2019 until this year,” said Airolvin. “The programme deepened my knowledge of Islam and fine-tuned my prayers, such as Sunnat Tarawih held during the fasting month of Ramadhan and short verses of Al-Quran while performing the obligatory five-time-a-day prayers.”

He added, “Although most of us are not well-versed in Jawi writing, learning with Roman alphabets under the guidance of a teacher really helped,” he said. 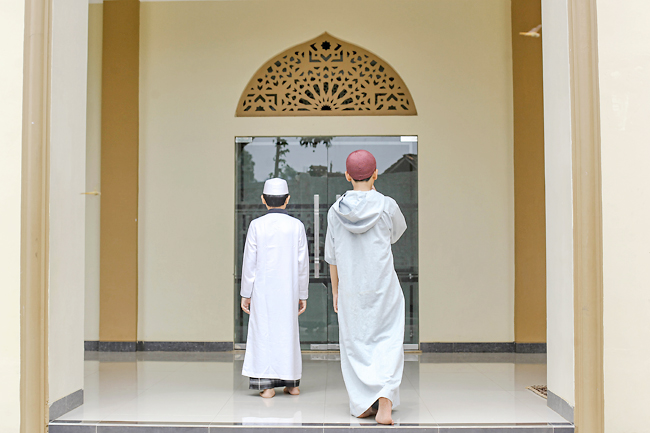 “We also joined activities, like slaughtering of sacrificial meat during the Feast of Sacrifice and took part in nightly vigils and learnt the history of Islam.”

Another course participant, Nurtasha binti Abdullah converted to Islam on May 7, 2015.

Nurtasha said she has learnt a lot about Islam from teachers, friends and acquaintances, as well as via the Internet.

“The Consolidated Muslim Converts programme brings benefits to us such as enhancing our basic knowledge of Fardhu Ain (obligation), reciting Al-Quran to strengthen our knowledge, Qiamulalil or nightly vigil, getting to know the Arabic alphabet of Hijahiyah and listening to religious talks,” she said.

Nurtasha said the programme began in 2021 at the PDI, but due to the COVID-19 pandemic, it was conducted virtually.

“We met physically and stayed overnight at the centre where we took part in many activities. I hope this programme will continue to deepen my knowledge of Islam as it brings a lot of benefits,” she said.

A total of 151 participants recently received their certificates, comprising 37 youth who have followed and completed the consolidation programme while another 114 from the four districts who have completed the advanced guidance scheme.

The convocation ceremony held for the first time aimed to extend appreciation and recognition to the converts.

In addition, it acknowledged the potential and commitment of the participants and confidence to learn and practise Islam, in addition to strengthening ties among converts.

The Consolidated Muslim Converts programme teaches new converts how to read Al-Quran so that they have the knowledge to live as Muslims.

Among the contents of the guidance scheme is a Fardhu Ain guidance course covering syariah, aqidah (belief), values and Fardhu Kifayah (social obligation).