Total trade up 70.9 per cent in April

In April, Brunei Darussalam’s total trade was valued at BND3,042.6 million, an increase by 70.9 per cent from BND1,780.1 million during the same month last year. Meanwhile, for month-to-month changes, total trade for April increased by 21.6 per cent compared to March.

The increase in mineral fuels exports was mainly due to the higher export value of liquefied natural gas (LNG) and petroleum products from downstream activities. LNG export value increased as a result of higher LNG prices which rose to USD12.01 per MMBtu in April from USD7.50 per MMBtu in April 2021. Furthermore, the export value from petroleum products from downstream activities increased to BND774.0 million, of which the main commodity was automotive diesel fuels.

In terms of commodity by section, mineral fuels represents the major contributor to the Sultanate’s exports at 76.3 per cent, followed by chemicals (19.5 per cent), and machinery and transport equipment (2.4 per cent).

The largest export commodity to Australia and Singapore was mineral fuels, meanwhile, to China was chemicals. 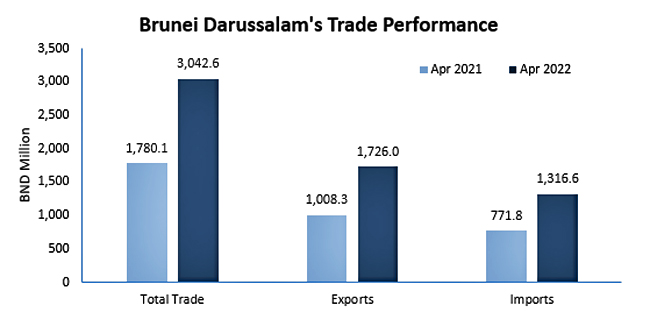 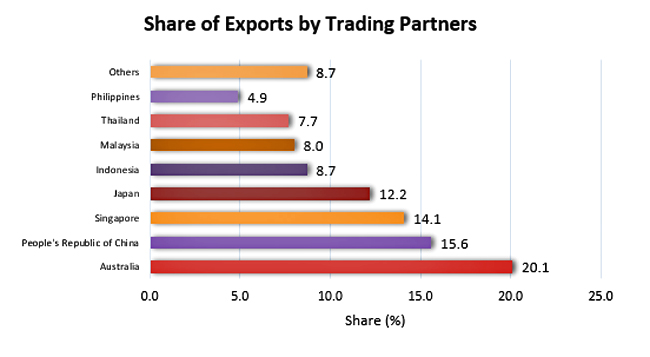 The five main imports by commodity were mineral fuels with 72.5 per cent, followed by machinery and transport equipment at (7.4 per cent), chemicals at (6.7 per cent), food (5.7 per cent) and manufactured goods (3.3 per cent).

By end use category, imports of intermediate goods accounted for 57.8 per cent of the total imports, followed by capital goods (38.2 per cent) and consumption goods (four per cent).

For imports by trading partners, the highest share was from Malaysia at 21.2 per cent, followed by United Arab Emirates (12.8 per cent) and Qatar (12.6 per cent), with mineral fuels as the largest import commodity.

According to transportation, in April, the highest share for both exports and imports was transport by sea, which amounted to BND2,928.4 million or 96.2 per cent.

The IMTS full report for April is available from the Department of Economic Planning and Statistics website at https://deps.mofe.gov.bn.