LONDON (AP) – Reece Topley set a record by taking six for 24 to help England beat India by 100 runs in the second one-day international (ODI) at Lord’s on Thursday, levelling the three-match series.

Moeen Ali (47) and David Willey (41) shared a 62-run seventh-wicket stand before India bowled out the hosts for 246 in 49 overs, backed by Yuzvendra Chahal’s four wickets for 47.

Topley made his international debut seven years ago but has battled injuries in his career.

“It means a lot, it makes it all worthwhile to be honest,” he said after sealing victory for England with 11 overs to spare. ”It was a terrific team performance to bounce back from defeat the other day and I’m just happy that I played my part.”

India chose to bowl first like on Tuesday, when they bowled out England for 110 and won by 10 wickets. 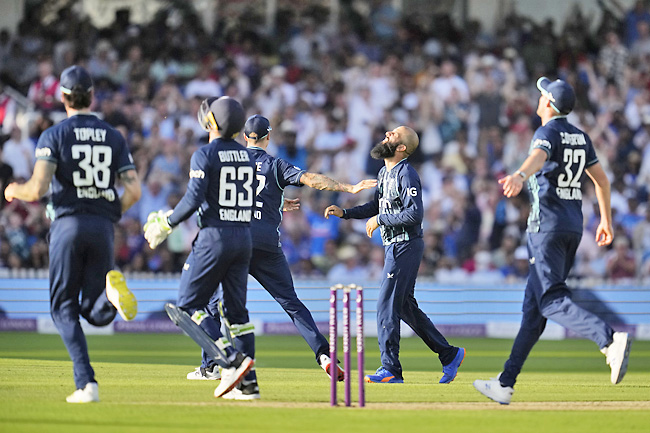 Jason Roy (23) and Jonny Bairstow (38) shared an opening stand of 41 before Roy chipped Hardik Pandya’s leg-stump half-volley to deep square. Bairstow lost his middle stump to the wrist-spinner Chahal as he aimed a slog-sweep at the bowler.

Joe Root (11) and Ben Stokes (21) were both lbw. Stokes hit two fours on the reverse-sweep before being pinned on the back leg attempting a third. Jos Buttler (4), the captain, fell to seam on the fifth ball by Mohammed Shami, leaving England at 102-5.

Moeen then had stands of 46 with Liam Livingstone (33) before the 62 with Willey. Moeen was within one boundary of his first 50 since 2017 when he holed out to Chahal.

Left-armers Willey and Topley gave England the strong start it needed. Rohit Sharma fell lbw to Topley for a 10-ball duck. Shikhar Dhawan scratched out nine from 26 balls before gloving Topley down leg.

Rishabh Pant left with a duck after chipping Brydon Carse’s full-toss for an easy catch, putting pressure on Virat Kohli, who was India’s only change from Tuesday, replacing Shreyas Iyer. A mild groin strain sidelined Kohli from the first ODI.

But on a Willey pitch angling away Kohli got an outside edge to Buttler, leaving India at 31-4 in the 12th over.

Buttler brought Topley back into the attack and Suryakumar Yadav (27) misread the bounce as he dragged a cut into his stumps. Pandya (29) was caught in the deep off Moeen and it was 101-6 before Topley finished off the lower order.

“He’s had quite an interesting story,” Buttler said of Topley. “For him to come back from that and to take six for 24 at Lord’s is an incredibly special performance.

“He’s had really tough experiences, not knowing if he would play again, and that’s given him a real sense of perspective and a real enjoyment when he’s playing.”