THE WASHINGTON POST – I love a simply prepared salmon fillet, slow-roasted or gently pan-seared with a little olive oil, sprinkled with herbs and lemon juice.

Still, we’ve all been there. We buy a fillet – fresh or frozen – only to discover it’s not quite as fresh as it appeared at the grocery or fish market. That’s where fish patties can come to the rescue. With added spices and a binder, they can save the day flavour-wise and be a thrifty way to make your fish go a little further, too.

The mild salmon is combined with fresh ginger, scallions and soya sauce and served with an aioli heated with a whisper of wasabi powder. Taste and add more if you want a livelier kick.

The six-ingredient patty could be made with other fish as well, such as cod, snapper or sea bass.

The first time around, I overmixed the fish mixture and my patties were a bit rubbery. The key to making these is to be gentle as you mix the seasoning and fish together. 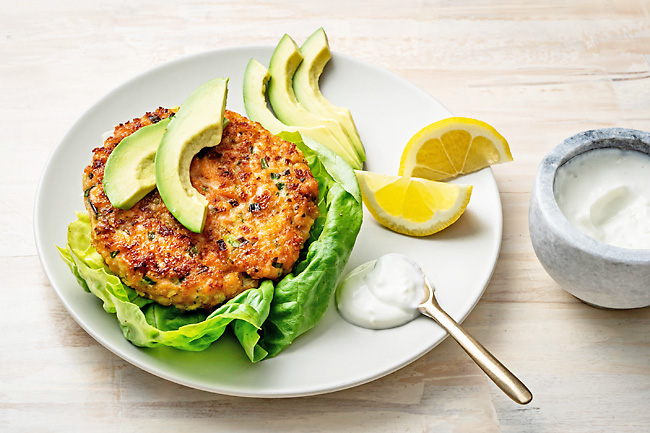 Cut the salmon into big chunks, then drop it in the bowl of the food processor with the grated fresh ginger and sliced scallions and pulse it just until the ingredients are chopped and combined. It is best if small pieces of fish are visible. Then gently blend that mixture by hand with panko and soya sauce just until combined and form into patties.

The cookbook suggests cooking the patties on one side in an ovenproof skillet and then finishing them in a 400-degree oven for about 10 minutes, but I found them easy to sear, flip and finish on the stove.

Try the patties, as the cookbook recommends, atop lettuce leaves with sliced avocado and a homemade aioli, or eat them on a toasted brioche roll smeared with that aioli. We also liked them with a vinegar, soya and scallion dipping sauce.

SOY GINGER SALMON PATTIES
This quick and easy fish patty, flavoured with soy sauce and fresh ginger, also can be made with fresh tuna, snapper or sea bass. Serve it atop lettuce with the suggested aioli or serve it on a bun as a burger.

DIRECTIONS
In the bowl of a food processor, place the salmon, ginger and scallions, and pulse just until the ingredients are chopped; do not overprocess. It’s okay if small chunks are visible. In a large bowl, gently mix together the salmon mixture, breadcrumbs and soya sauce just until combined. Shape the mixture into four patties, about half-inch thick.

Make the aioli: While the patties cook, in a small bowl, stir together the yoghurt, garlic, honey, wasabi powder or prepared horseradish and salt. Taste, and add more honey and/or salt, as needed.

Place a few lettuce leaves on each plate; top each with a salmon patty. Add the avocado slices and a dollop of aioli to each patty. Serve with a wedge of lemon.