Too hot to return

THE WASHINGTON POST – Every June, Tony Caprio and his wife Linda hike into the Sugarbowl – a cluster of giant sequoias high in the Sierra Nevada – to admire the profusion of wildflowers and walk among some of the oldest and tallest trees on the planet.

Now when he visits, he sees something that, scientists say, has no precedent in thousands of years of history: vast acres of dead sequoias, killed by fire.

The Sugarbowl, an amphitheatre of solemn and enormous trees, part of the Redwood Mountain grove, one of the largest collections of giant sequoia on Earth, has become a graveyard. Trees that have lived since the Roman empire stand as fire-blackened matchsticks, their once bushy green crowns shrivelled into charred fists.

When the KNP Complex fire roared through last October, it burned so hot in some places that Caprio expects few seedlings to rise from the ash.

“These are all dead,” said Caprio, the fire ecologist for Sequoia and Kings Canyon National Parks, wandering among the grove now closed to the public. “So what’s going to be the long term prognosis for an area like this? Is it going to come back as a shrub field?”

Summer wildfires, in the era of climate change, mean something different now for giant sequoias. These trees evolved with fire, and need it to reproduce, but the scale of recent megafires – burning in hotter, dryer conditions across far greater areas – have overwhelmed many of the groves tucked high in the California mountains. 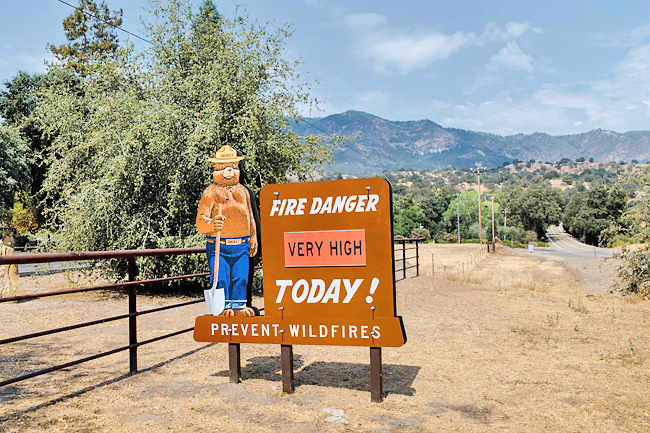 Six of the seven largest wildfires in California history have occurred in the past two years, and in that period, up to nearly one fifth of all naturally-occurring large giant sequoias on Earth have been killed.

“What is new and shocking is these large areas, 100 acres or more, where every single sequoia is killed,” said an emeritus scientist in forest ecology at the United States (US) Geological Survey Nate Stephenson. “There is no evidence anything like that has happened in the past one thousand years, probably many thousands of years.”

“We’re in a whole new ballgame,” he said. And in this new game, the rules are in dispute.

The question of how to protect the remaining sequoias, and more broadly how to manage America’s remaining forests in an era of climate-magnified megafires, has divided scientists and the public.

The two wildfires that burned in and around Yosemite National Park this summer – including among the famous Mariposa Grove of sequoias – rekindled the debate about what humans can or should do to protect these iconic trees.

Across the parched West, the Biden administration and its public land managers want to dramatically ramp up controlled fires and logging as a way to thin out fuel-packed forests and avoid deadly wildfires.

Earlier this year, the Biden administration announced a decade-long, USD50 billion plan to use logging and prescribed fire across 50 million acres in 11 Western states to manage wildfire.

Late last month, the US Forest Service said it would take emergency action, including setting fires and cutting down trees, to try to protect a dozen sequoia groves over more than 13,000 acres. Legislation proposed in June, called the Save Our Sequoias Act, would fast-track environmental reviews for these types of logging-and-fire work in the name of fire prevention.

The scale of what some foresters and researchers are calling for in places such as the Sierra Nevada amounts to a wholesale re-engineering of the forest.

They said the land management policy that prevailed during much of the 20th Century – of putting out most wildfires – has led to overgrown forests. During the past two decades, as climate change has intensified, drought in the West has killed many of those trees, leaving downed logs and dead snags – the “fuels” that firefighters said create hotter and more destructive wildfires.

Before colonists settled the West, fires caused by lightning, and set routinely by Native Americans, helped thin out forests.

Back then, it was typical to have about 50 trees per hectare in the Sierra Nevada and southern Cascades, whereas now some forests have 300 to 400 trees per hectare, according to researcher Alexis Bernal with the University of California, Berkeley who studies giant sequoias.

Extensive logging is needed to reverse that, she said, coupled with more fire. “We want to get a forest back to what a fire resilient landscape would look like,” she said. “You would have to take out a lot of these trees to do that.”

Caprio said roughly 30,000 acres per year used to burn naturally in Sequoia and Kings Canyon, while the park only accomplishes about 3,000 acres in prescribed burning each year. “That gives you an idea of the deficit,” he said.

But some environmentalists and residents are wary of escalating forest management, and doubt that human intervention can contain wildfire on the scale and intensity it now rages.

They worry about prescribed fires escaping their boundaries and logging projects that offer little resistance to flames fanned by a hotter and drier world.

Two prescribed burns set by the US Forest Service that grew out of control earlier this year caused “unfathomable” destruction in New Mexico, as Governor. Michelle Lujan Grisham put it, destroying hundreds of homes, displacing thousands, and threatening water supplies in a burn area larger than Los Angeles.

Logging projects in the name of thinning and fire prevention have also been challenged in lawsuits up and down the West Coast. Environmental groups are fighting to preserve a rule that prohibited cutting large trees on public land in Oregon.

Local governments in California, along with retailer Patagonia, sued the Forest Service to block logging for fire defence on Pine Mountain, a popular recreation area.

Climate change has caused hotter and drier conditions that have pushed the peak of US wildfire season earlier in the summer – July rather than August in recent decades.

The season has also lengthened and fires have burned more total acreage. Since 1983, when federal records began, more than 10 million acres have burned in only three years; but all of them have happened since 2015.

Just last year, wildfires destroyed nearly 6,000 homes and other buildings; one-third of those were in California.

Yosemite and the giant sequoias have been a flash point in the debate even before the Washburn and Oak fires, the two fires in and around Yosemite, ignited last month.

An effort to cut down trees across more than 2,000 acres inside the national park was challenged in a lawsuit in federal court by the Earth Island Institute, an environmental group based in Berkeley, California. Last month, a judge temporarily halted what the park calls a “biomass removal” project.

The architect of Yosemite’s prescribed fire and thinning projects is biologist and firefighter Garrett Dickman, whose job is to protect the park’s famed sequoias. Forests in his jurisdiction are often densely packed with understory vegetation and downed trees.

The drumbeat of massive fires torching the Sierra Nevada and killing sequoias led Yosemite to devise a plan to cut down trees along certain road corridors primarily to give firefighters more room to operate.

“The thinning is right where the firefighters are going to stand,” he said. “If you don’t do that, you can’t stand there. It’s too hot.”

Dickman is aware that the cutting of any trees in a national park is a serious decision.

“I don’t want to run heavy equipment all over this whole thing,” he said. “But running it along the road systems or running it in communities: That’s the kind of compromise that we needed to do in order to get good fire on the ground and prevent the bad fires.”

Chad Hanson climbed onto a stump that was more than five feet across. He knelt down and ran his hand slowly across the tree rings.

All around him were stumps, hundreds of freshly cut firs and pines in the Merced Grove inside Yosemite. Logs by the dozen had been stacked in piles, ready for removal to be sold for lumber or burned in power plants for electricity. The churned up earth from the treads of heavy machinery stretched into the distance. “The people who did this should not be running a national park,” Hanson said bitterly.

“They’re literally clear-cutting large swaths of the Merced Grove. This is unacceptable.”

Hanson, a 55-year-old ecologist, is co-founder of the John Muir Project, a subsidiary of the Earth Island Institute, which brought the lawsuit against Yosemite.

Hanson is primarily opposed to cutting trees as a strategy to manage wildfires. He believes “thinning” and “fuel reduction” are euphemisms for commercial logging – a point made in a letter last year to Biden signed by Hanson and 200 other experts warning against these practices in the infrastructure bill.

He also believes cutting trees does not slow or contain fires and can accelerate them, by opening the canopy and drying out forests, and leaving behind flammable debris and grasses.

“This is not a fuel break,” Hanson said as he stood in the 200-foot-wide newly logged corridor in Yosemite. “This is actually a place where the fire will whip through more rapidly and more intensively.”

A review of the scientific literature on key questions about fire management tools published last year found that thinning, removing fuels, and using prescribed fires, can be effective at lessening the severity of wildfires under certain conditions, although they’re not appropriate in all types of forests and if done incorrectly can aggravate the problem.