THE STAR – Flying less, taking public transport, eating more vegetarian food: There are plenty of ways people can lessen their impact on the environment.

One thing few people are talking about, though, is pets.

Research suggests that a larger dog can make up half of the total carbon emissions that a person should make in order not to harm the climate further.

“If someone goes to a demonstration in favour of more measures to protect the climate and they bring along their 50-kilogramme (kg) dog while they’re calling for a halt to short-haul flights, that’s double standards,” said head of the Institute for Technical Environmental Protection at Berlin’s Technical University Matthias Finkbeiner.

Just how bad are pets for the environment? That was the question a group of Berlin scientists set out to answer in 2020. They looked at different sized dogs, looked at where their food came from as well as at its packaging and transport, and they also examined the environmental impact of the dogs’ urine and faeces and associated street-cleaning measures.

A 30kg dog generates about 19 tonnes of CO2 over 18 years, the Berlin team found. That’s around 1,050kg per year, or a good tonne of CO2. That could mean a smaller Doberman bitch or a small Labrador dog.

If you’re wondering what one tonne of carbon emissions adds up to, its around the equivalent of an economy return flight from Frankfurt to Las Palmas on the Canary Islands, which is 1.1 tonnes according to a flight calculator created by the myclimate foundation. 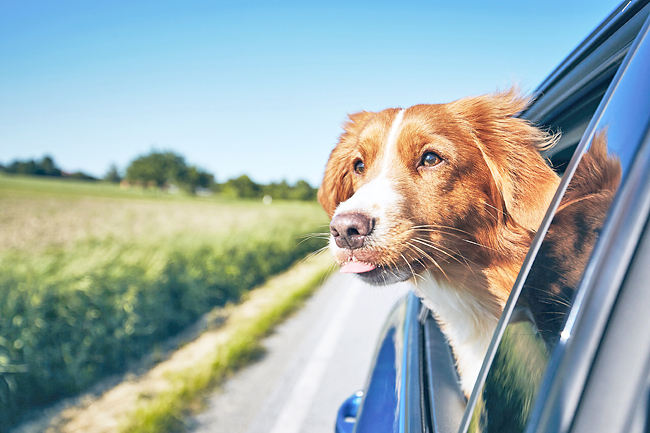 In mathematical terms, each person on earth should only emit two tonnes of CO2 per year in order not to further burden the climate, as that is the amount that the earth can absorb naturally, according to the Intergovernmental Panel on Climate Change (IPCC).

However, many people are responsible for much higher emissions levels.

Germans, for example, are responsible for around 8,500kg per person annually, according to the Environment Ministry’s 2019 data.

A Swiss team took the calculations further, working out the emissions over the life cycle of domestic animals from horses to ornamental fish.

The team at the ESU-Services in Schaffhausen, Switzerland, used a different methodology, though, and took factors into account such as car journeys to the woods to walk the dog, or heat loss through a cat flap.

The Swiss team concluded that keeping a 29kg dog, such as a Labrador, for a year is roughly equivalent to the CO2 emissions of a car journey of 2,828kg.

Meanwhile keeping a cat weighing 4.2kg is equivalent to the CO2 emissions of driving 1,164kg, they said.

There has been little discussion of the issue, partly due to the lack of data available, according to Michael Bilharz of the German Environment Agency.

It took 12 years before pets were included in the popular CO2 calculator on the agency’s website, he said.

Plus, the issue is highly emotional and those who take it on can expect to face some hostility, say all involved.

“Is this for real? Should we have all horses, dogs and cats put to sleep immediately?” one person posted under an article about the issue.

The researchers are all eager to point out that they are not trying to blame the owners of pets.

“But we have to be clear about it: Every hobby causes environmental pollution,” said ESU Services founder Niels Jungbluth. “One person goes skiing, another goes golfing, the third has a horse, a dog or a cat.”

Each person has to make a trade-off, said Finkbeiner: “Having a dog, eating meat every day, driving the biggest car and flying a lot – all that together might be too much.”

If you are vegan, you can improve your ecological balance by 800 to 1,000kg of CO2 a year, Bilharz said. “But if you have a Labrador or Retriever at the same time, you lose that saving again.”

Pet ownership is rising, however. The number of dogs in Germany has more than doubled in the past 20 years.

There were 15.7 million cats and 10.7 million dogs in Germany in 2020, according to the Pet Supplies Association. But that figure is likely to have increased substantially since the beginning of the pandemic, when many people bought pets, particularly during the times when restrictions were toughest.

He says it’s one thing to have a guard dog on the farm or a cat that catches mice in the barn.

“But if I have a cat in every fifth apartment in a dense housing development with 400 flats and they all roam the backyard and hunt, then not only do we have a climate problem, but we soon won’t have any birds left either.”

Pet owners often counter that their animals are good for them and say that needs to be taken into account. People with dogs, for example, spend more time in the fresh air and fly less.

Children learn to take responsibility for living creatures, and cats can help with depression and other psychiatric problems.

“We don’t deny the benefits at all,” said Finkbeiner. “But you can’t put these considerations into an ecological balance sheet.” After all, he said, even products that are seen as bad deliver some form of such benefits. “One person’s well-being is enhanced by a dog, another person’s by a Porsche.”

Pet owners can lessen their animals’ effect on the climate, however.

“With three children, do you have to have three cats or is one enough?” said Jungbluth.

“Can’t you also walk the neighbour’s dog instead of owning your own?”

Feed is the biggest problem, according to the research. “It is theoretically possible to feed adult and healthy dogs on a purely plant-based diet,” said Volker Wilke of the University of Veterinary Medicine Hanover Foundation.

So far, tests giving animals vegan diets – such as based on peas, lentils, sweet potato or soy and with added vitamin A, taurine and other amino acids – have not shown any negative consequences.

However, if you’re thinking of changing your animal’s diet, seek expert advice first so there’s no risk of a negative impact on the heart and nervous system, muscle atrophy or other problems.

“You don’t even have to get to the big question of yes or no to meat when it comes to improving your ecological balance,” said Wilke. It also helps if you give your animal more dry food instead of wet food.

Consider also where the pet food comes from. “Vegan food with a large proportion of soy from Brazil and wet food in a can with additives from other parts of the world can be many times more harmful to the climate than dry food containing meat that is produced here.”

You can also give your animal meat and by-products that humans do not eat, such as udders or lungs, or by using insects as a source of protein.

It’s easier with dogs than cats, said Wilke. “It’s almost impossible to feed a cat on a plant-based diet.”

Here, too, though you can help by getting food that uses animal by-products rather than a lot of muscle meat, or by giving your cat more dry food if possible.

Many animals are given too much food anyway, said Wilke. “Adapting feeding to real needs would also have enormous potential in terms of sustainability.”

Pets often also suffer from being overweight, according to the researcher. “Not only in the sense of health, but also against the background of sustainability, you should keep your four-legged friend slim.”