NEW YORK (AP) – New year’s celebrations swept across the globe, ushering in 2023 with countdowns and fireworks – and marking an end to a year that brought the war in Europe, a new chapter in the British monarchy and global worries over inflation.

The new year began in the tiny atoll nation of Kiribati in the central Pacific, then moved across Russia and New Zealand before heading deeper, time zone by time zone, through Asia and Europe and into the Americas.

The ball dropped on New York City’s iconic Times Square as huge crowds counted down the seconds into 2023, culminating in raucous cheers and a deluge of confetti glittering amid jumbo screens, neon, pulsing lights and soggy streets.

A man wielding a machete attacked three police officers near the celebration, authorities said, striking two of them in the head before an officer shot the man in the shoulder about eight blocks from Times Square, just outside the high-security zone. The two officers were hospitalised, one with a fractured skull and the other with a bad cut, but expected to recover. The 19-year-old suspect was also expected to recover.

Across the world, at least for a day, thoughts focussed on possibilities, even elusive ones like world peace, and mustering – finally – a resolve to keep the next array of resolutions. 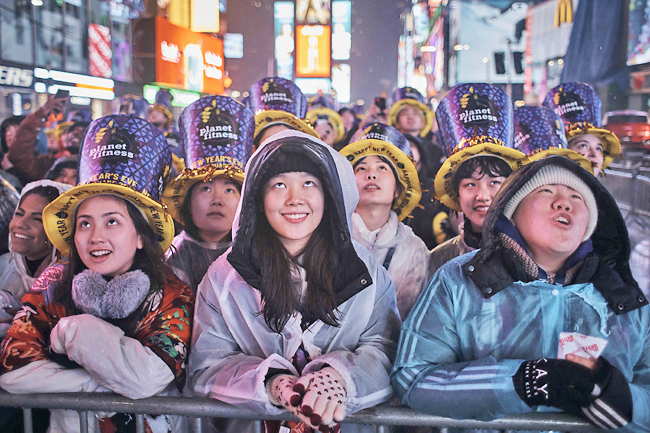 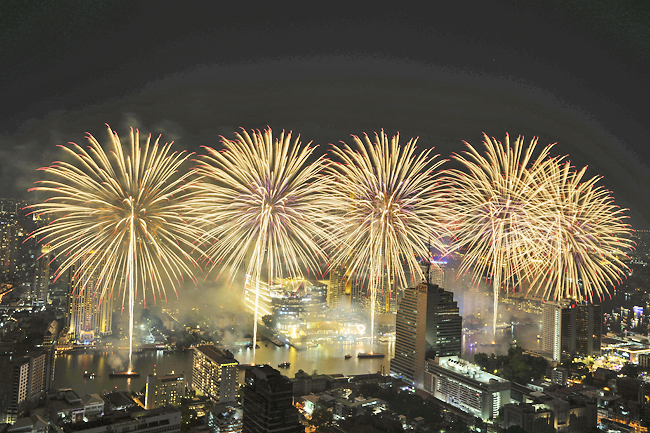 In a sign of that hope, children met St Nicholas in a crowded metro station in Kharkiv, Ukraine. Yet attacks continued new year’s eve.

At midnight, the streets of the capital, Kyiv, were desolate. The only sign of a new year came from residents shouting from their balconies, “Happy new year!” and “Glory to Ukraine!” And only half an hour into 2023, air raid sirens rang across Ukraine’s capital, followed by the sound of explosions.

Kyiv Mayor Vitali Klitschko reported an explosion in Holosiivskyi district, and authorities reported that fragments of a missile that had been shot down had damaged a car in a central district.

“During the coming year, we will be unfailingly at your side,” Macron said. “We will help you until victory and we will be together to build a just and lasting peace. Count on France and count on Europe.”

Big Ben chimed as more than 100,000 revellers gathered along the River Thames to watch the spectacular fireworks show around the London Eye. The display featured a drone light display of a crown and Queen Elizabeth II’s portrait on a coin hovering in the sky, paying tribute to Britain’s longest-serving monarch who died in September.

Rio de Janeiro’s Copacabana beach welcomed a small crowd of a few thousand for a short fireworks display, and several Brazilian cities cancelled celebrations this year due to concern about the coronavirus.

Turkiye’s most populous city, Istanbul, brought in 2023 with street festivities and fireworks.

In New York, rain that was fierce at times did not deter the crowd at a dazzling Saturday night spectacle kicking off celebrations across the United States.

The Times Square party culminated with the descent from One Times Square of a glowing sphere 12 feet (3.6 metres) in diameter and comprised of nearly 2,700 Waterford crystals.

“I just wish everyone a lot of prosperity peace and love,” a reveller who was visiting from the Phoenix area Tina Wright said after the countdown. “And let’s just get things moving in the world right now.”

Last year, a scaled-back crowd of about 15,000 in-person mask-wearing spectators watched the ball descend while basking in the lights and hoopla.

Because of pandemic rules, it was far fewer than the tens of thousands of revellers who usually descend on the world-famous square.

Before the ball dropped, there were heavy thoughts about the past year and the new one to come.

“2023 is about resurgence – a resurgence of the world after COVID-19 and after the war in Ukraine. We want it to end,” said Arjun Singh as he took in the scene at Times Square.

In Australia, more than one million people crowded along Sydney’s waterfront for a multi-million dollar celebration based around the themes of diversity and inclusion.

More than 7,000 fireworks were launched from the top of the Sydney Harbour Bridge and another 2,000 from the nearby Opera House.

“We have had a couple of fairly difficult years; we’re absolutely delighted this year to be able to welcome people back to the foreshores of Sydney Harbour for Sydney’s world-famous new year’s eve celebrations,” the city’s producer of major events and festivals Stephen Gilby told The Sydney Morning Herald.

In Auckland, New Zealand, large crowds gathered below the Sky Tower, where a 10-second countdown to midnight preceded fireworks. The celebrations in New Zealand’s largest city returned after COVID-19 forced them to be cancelled a year ago.

Concerns about the Ukraine war and the economic shocks it has spawned across the globe were felt in Tokyo, where Shigeki Kawamura has seen better times but said he needed a free, hot meal this new year’s.

“I hope the war will be over in Ukraine so prices will stabilise,” he said.