There is no stopping her

A little girl’s booming voice reverberated throughout Taman Haji Sir Muda Omar ‘Ali Saifuddien in the capital on February 23, 2021, leading the crowd with a patriotic monologue. All eyes were on the then nine-year-old Nur Hasnaa Syahmina binti Md Hassanal Adilah (Mina) as she sang the first few lines from the patriotic Berkibarlah Bendera Kita.

The fact that this little girl rose to the occasion and performed before a huge crowd was an undoubtedly impressive feat.

Mina, a Year 5 pupil at Yayasan Sultan Haji Hassanal Bolkiah (YSHHB) Primary School, was handpicked by the school to perform at the National Day celebration.

She jumped at the opportunity and worked hard to memorise the script during rehearsals to ensure a flawless performance.

It was even more memorable when His Majesty Sultan Haji Hassanal Bolkiah Mu’izzaddin Waddaulah ibni Al-Marhum Sultan Haji Omar Ali Saifuddien Sa’adul Khairi Waddien, Sultan and Yang Di-Pertuan of Brunei Darussalam approached her after the march past and commended her for a job well done.

From then, there has been no stopping this bright and ambitious girl. She was selected again to be one of the cast members in a live sketch on how COVID-19 affects the way of life during the Hari Raya celebration, organised by Yayasan Sultan Haji Hassanal Bolkiah at the International Convention Centre in Berakas the same year. 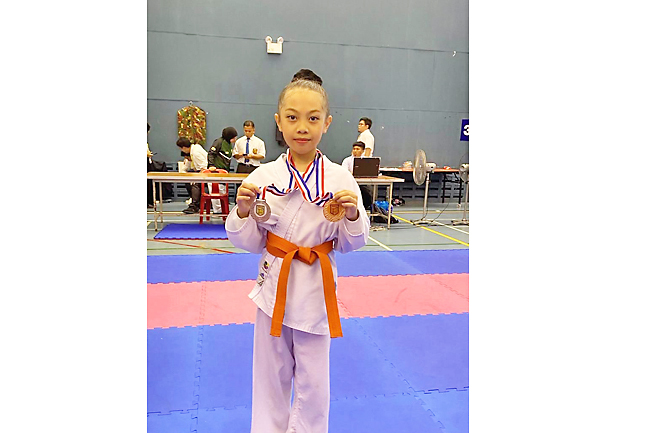 As part of His Majesty’s 75th birthday celebrations, Mina was picked again by her school to participate in the Pantang Larang stage acting competition where she brought glory to YSHHB Primary School by snatching the third place.

Mina was also approached by the Brunei Climate Change Secretariat to get involved in its latest climate change video as a voiceover actress and join the production of a music video alongside her two brothers.

At first glance, Mina is like other typical 10-year-olds. A doting daughter and a loving sister to her two younger siblings, she loves to sing, dance and play with her friends.

Her love for singing prompted her parents to enrol her for the Bintang Kecil singing competition 2021, organised by Radio Television Brunei (RTB). She progressed to the semi-final round and was invited to perform at the finals with the other contenders.

“It was a fun experience and following that, I was offered to join a musical TV show called Ceria Aidilfitri,” she said.

In 2020, Mina developed an interest in the art of self-defence.

Her parents then registered her to become a member of the karate scheme under the Department of Youth and Sports.

In November, she was officially made a member of the Shotokan Karate Brunei.

What began as a hobby has now become a passion. Mina trains three times a week at the Menglait Sports Complex and undergoes intensive training to prepare her for the National and International tournaments. She won a silver (individual kata) and bronze (Team kata) in the Keputeraan Cup 2021. She also participated in the 18th SBY International Karate Cup in Indonesia as well as the 6th JKFan Cup Challenge in Japan, and won a bronze in the individual kata category.

However, the COVID-19 pandemic proved to be the biggest challenge as they had to forego face-to-face training and rely on online karate training as well as YouTube videos to keep her practice running. With all the hard work, she is now a green belt holder.

Mina said she owes all her achievements and successes to her parents, who have been supportive from day one. Her father, Md Hassanal Adilah bin Haji Md Junaidi, said he discovered Mina’s talent in singing and dancing when she was one year old.

“She is always bold and is never too shy to perform at our family gatherings. We encourage her to do her best and motivate her to always challenge herself,” he said.

Her parents also make sure she never misses out on her childhood, by taking her out on play dates and spending time with her favourite toys.

However, they also want Mina to prioritise studies before other extra-curricular activities by helping her with time management and assisting her with homework and school projects.

“As parents, we worry about the negative influence of social media on children. We allow Mina to have her own Instagram and TikTok accounts, which we monitor from time to time,” said her mother, Pengiran Nuramalina binti Pengiran Norddin.

Asked what she wants to be when she grows up, Mina cheerfully said she dreams of becoming a police officer, in continuing the family’s legacy just like her grandfather and great grandfather, who served and protected the country.

“I want to make my family proud and bring glory to my country, especially in karate and performing arts,” she said.

The future looks bright for Mina. With sheer determination, nothing is impossible for this ambitious little girl.