STOCKHOLM (AFP) – Little is known of the mysterious Denisovans. These distant relatives of the Neanderthals roamed eastern and southern Eurasia but left little trace of their time on Earth.

Hominin Denisova was discovered by Swedish paleogeneticist Svante Paabo, the winner of this year’s Nobel prize in medicine.

In 2012, Paabo and his team sequenced the DNA of a remarkably well-preserved fragment of bone, 40,000 years old, found four years earlier in the Denisova cave in southern Siberia.

The result was astounding – they had come across an entirely novel hominin, distinct from Neanderthals and even more from Homo sapiens, aka modern humans.

The Denisovans shared a common ancestor with the Neanderthals until their populations diverged 380,000 to 470,000 years ago.

This was much later than the split between modern humans and Neanderthals/Denisovans, which occurred between 550,000 and 760,000 years ago.

In the same cave, paleontologists later discovered the fossil of a young girl who was part Neanderthal, part Denisovan, proving that these two archaic species interbred. 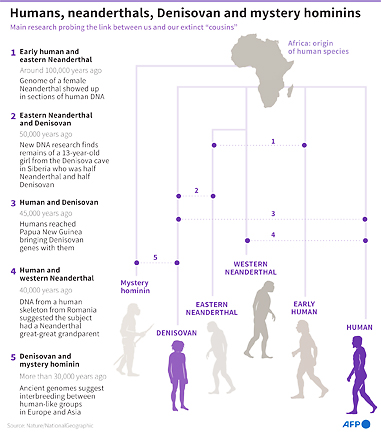 But while we know the Neanderthals disappeared around 40,000 years ago, we have little idea as to when our other closest evolutionary relative went extinct.

We don’t know what the Denisovans looked like either as they left only rare fossilised traces of their time on Earth other than the fragments found in Siberia and a jawbone discovered on the Tibetan Plateau in 2019.

The work of Paabo and his team at the Max Planck Institute in Leipzig have nonetheless shed some light on our mysterious ancestor.

By comparing DNA sequences, they found a “gene flow” between both Denisovan and Neanderthals, and between Denisovans and modern humans.

In other words, before they went extinct, Denisovans also interbred with our species.

Up to six per cent of Denisovan DNA is still found in present-day humans in Asia-Pacific and Southeast Asia – Australian Aborigines, Melanesians and the Negritos of the Philippines – suggesting our far-distant relative roamed over a vast swathe of east and south Eurasia.

Scientists believe the ancient ancestors of today’s Melanesians interbred with Denisovans from Southeast Asia, far from the frozen mountains of Siberia and Tibet.

Proof that the Denisovans had spread as far as the warm tropics of Asia was lacking until a missing link – a child’s tooth at least 130,000 years old – was discovered in a cave in Laos in 2018.

One of the biggest remaining mysteries is why modern humans were so successful in their expansion and why the Denisovans and Neanderthals went extinct, after having adapted to a Eurasian environment for several hundred thousand years.