The invasion of ‘Frankenfish’

WOOLFORD, MARYLAND (THE WASHINGTON POST) – A dozen or so dead northern snakeheads lay stacked in slime and ice behind a general store in Woolford on Maryland’s Eastern Shore.

Fisherman Caz Kenny reached into the cooler to highlight some of the controversial fish’s finer points, such as the sharp, gnarled teeth behind its ghastly mug.

Kenny, a lifelong outdoorsman, has been sounding the alarm for years about the invasive species, a powerful predator native to Asia and Russia that was first discovered breeding on the East Coast in a small suburban Maryland pond on the other side of the Chesapeake Bay 20 years ago. They’ve since spread south to Virginia, north to New Jersey and likely beyond.

Kenny, 47, didn’t filet the fish in the cooler behind the Woolford Store in Dorchester County, one of his hangouts, but he’s seen his fair share of snakeheads splayed open and knows they’re usually full of eggs and other animals. He rattled off a list, his voice a machine-gun staccato: minnows, bass, perch, crayfish, frogs, even baby ducks.

“There’s not one place here where they haven’t had an impact,” Kenny told me as he hoisted a thick eight-pounder from the cooler. “There’s not a biologist around here that says we’re okay.”

Northern snakeheads were first seen in the spring of 2002 when an angler hooked one in a swampy pond behind a shopping centre in Crofton, Maryland, about 30 miles from Washington DC. 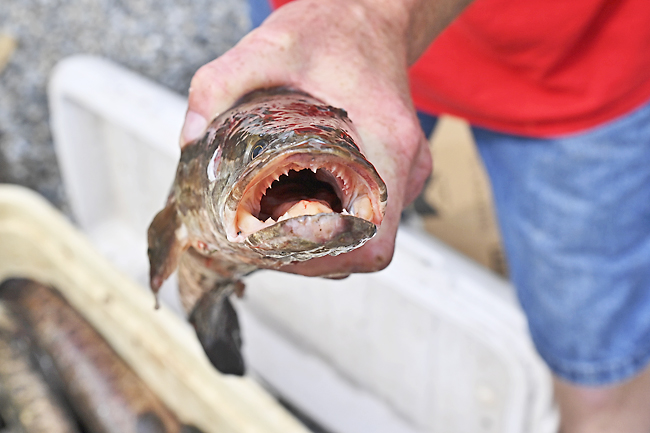 When another was caught there and reported to Maryland’s Department of Natural Resources, all aquatic hell broke loose, and the legend of the ‘Frankenfish’ was born. Think of the killer bee scares of the 1970s and the media attention those received.

A Washington Post headline from July 2002 found that the ‘Freakish Fish Story Flourishes’.

The fish was able to gulp air and “walk”. Horror movies were made – including one called Snakehead Terror, starring the supermodel Carol Alt – and locals sold T-shirts.

How did the dreaded fish get here? Two snakeheads were released into the pond, The Washington Post learnt, by a man who’d bought them from an Asian market in New York City, intending to turn them into soup.

For every outdoorsman like Kenny, who believes snakeheads will ultimately destroy local populations, there are others who have come to prize, even obsess over, the fish for its fighting prowess on the end of a fishing line. Many of those fishermen said they don’t see that devastation in the places they fish. The two factions often mix it up in the half-dozen Facebook groups dedicated to snakeheads.

Steve Kambouris, 38, a snakehead devotee from Dundalk, Maryland, believes the species will eventually be considered a non-native game fish, something to market to sport fishermen, not a pest to eradicate.

“I would say that anyone who says they are a trash fish hasn’t caught one,” Kambouris told me.

“In terms of a sport fish, I can’t think of any freshwater fish I would rather catch.”

The biologists, of course, are more measured than both sides in their assessments. Twenty years, they said, is a blip on the biological timeline.

“We should be concerned with invasive species because once they’ve become established, it’s basically impossible to eradicate them, and control measures can be very expensive,” biologist with the United States Fish and Wildlife Service Steven P Minkkinen said. When it comes to snakeheads, Minkkinen said, “the genie is out of the bottle”.

Minkkinen pointed to one study, a before-and-after look at fish populations in the Blackwater River watershed after snakeheads were established in 2012. The river and its vast tributaries are just a few miles from the Woolford Store and have become a hub for snakehead fishermen from all over the country.

The 2018-19 study replicated a fish study conducted in the Blackwater National Wildlife Refuge in 2006-07 and found declines in other prey fish populations. “The loss of these prey species could be in part due to presence of an additional top predator like Northern Snakehead,” the study’s authors wrote.

Snakeheads are tough. They can breathe oxygen out of water for days, and they don’t flop on their sides like most fish. Snakeheads slither. During big rains, they often push into adjacent waterways. When the snakeheads were discovered, officials poisoned Crofton Pond to kill them, but the Little Patuxent River runs just feet away, and it’s likely some fish or eggs got out or were moved by birds and turtles. They later became established in the Potomac River.

Snakeheads can be sold commercially but are difficult to catch in large numbers because they prefer shallow water with heavy vegetation, which few boats with nets can get to. One of the more successful ways to kill them has been nighttime bowfishing – using a bow and arrow – on smaller boats equipped with bright lights.

Fishermen find snakeheads tough to hook, on account of their hard, bony mouths, and they fight like pit bulls to break loose, even when they’re inside your kayak. That’s why most of the snakeheads in Kenny’s cooler had holes in their heads from arrows, knives or screwdrivers: from when fishermen administer the coup de grace, as if dispatching a zombie.

“Man, as long as they’re wet, they can live for days,” Kenny said.

Kenny, like state and federal wildlife officials, wants fishermen to eat the snakeheads they catch. He promotes events, such as the Cecil County Snakehead Fishing Tournament, in which the snakeheads have to be brought to a weigh station for measurements. Since it’s illegal to transport a live northern snakehead, they have to be dead. A screwdriver through the head usually does it.

Kambouris, on the other hand, hosts online tournaments where anglers submit their measurements with photos before releasing the snakehead.

Kenny’s final argument for killing snakeheads was a freshly cooked plate of breaded fish sticks on a table outside the store. He took a swig of an energy drink, then encouraged everyone – a fellow fisherman, the store owner, this reporter and a photographer – to dig in.

Some fish are so ugly that mariners and marketers changed their names to make them more palatable for the seafood industry. Snakeheads, with their bulging eyes and penchant for oozing slime, haven’t had such a makeover – but once you eat one, it barely matters.

Their meat is as white and flaky as any cod or flounder, perhaps even better.

The plate was empty in a few minutes, and there’s at least one more fisherman who might carry a screwdriver in his tackle box now.