The good, the bad and the Tuesday of the 2023 Globes

We’ve been trained to expect those on Sundays, when you can spend a lazy evening half-watching E! reporters vamp in formal wear for hours on end, waiting for stars to arrive as you do other things. Sundays are elegant. Tuesdays are not.

But the embattled Hollywood Foreign Press Association (HFPA)probably didn’t have much say in the matter if they wanted to get the Golden Globe Awards back on broadcast television in time for its 80th anniversary. So, Tuesday it was.

Hollywood, in large part, turned out too, acting as though it wasn’t a rainy weekday in Southern California and as though they hadn’t just a year ago protested the existence of the show. Brad Pitt and Angela Bassett came. So did Steven Spielberg and Ryan Coogler.

Everyone played their roles.

There were gowns and suits and bow ties and diamonds, clavicle bones and updos. Eddie Redmayne even had an oversized Carrie Bradshaw-esque satin flower affixed to his suit lapel. On the sodden silver carpet, Laverne Cox swooned over Austin Butler and Michelle Yeoh’s nominated performances, in Elvis and Everything Everywhere All At Once, respectively. No one seemed very worried about being there.

How much is the viewing audience – aside from the select few who are both very online and film fans – really thinking about the organisation that votes for these awards? Once the lights go down, it’s all about the show that’s right in front them – the stars, the speeches, the laughs. But host Jerrod Carmichael made sure to remind everyone of the ugly truths behind all the glitz and advertising dollars at the start. 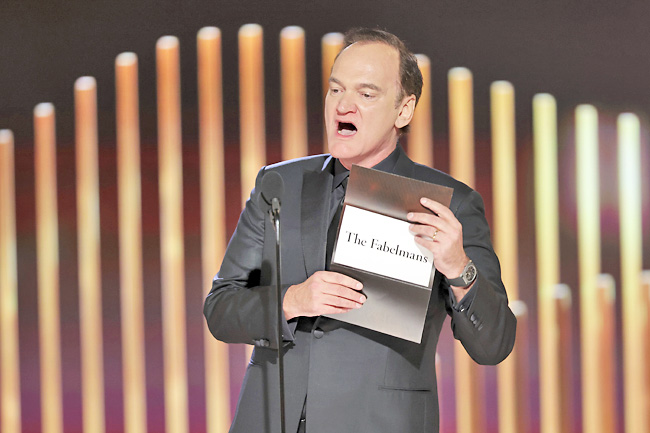 In the familiar ballroom of the Beverly Hilton hotel, awards went to good people who gave good, emotional speeches.

Ke Huy Quan, winning the first award of the night for his big comeback role in Everything Everywhere All At Once, warmed hearts shouting out Spielberg for giving him his first opportunity. The cameras were ready to cut back to the director, who cheered on the kid he directed so long ago in Indiana Jones and the Temple of Doom.

Jeremy Allen White, who catapulted to fame with The Bear, quivered when he mentioned his beloved, late manager Chris Huvane, continuing to say “thank you” as he walked off stage in a daze. The White Lotus’ Jennifer Coolidge wasn’t the only one reflecting on her own career and life on stage. Even Spielberg, normally stoic, got teary-eyed during his own turn the podium.

The room looked like a dimly lit lounge and a piano player decked in white feathers while giving theatrical flourishes and vamping for the cameras.

Bassett and Quinta Brunson learned the hard way that reading acceptance speeches off their phones was perhaps a mistake as family and friends texted them congratulations for their win. Colin Farrell used his own acceptance speech to compliment Ana de Armas’ performance in Blonde, as well as all of his Banshees of Inisherin collaborators, down to Jenny the donkey. Both he and Yeoh scolded the piano music that started to play them off.

It wasn’t for another hour that Carmichael would step up to clarify that the woman shown at the piano, Chloe Flower, was not actually the one playing many a winner off. It was a track, he said.

In many ways, the big film acting winners – Yeoh, Butler, Farrell and Quan – at the Globes looked like a possible rehearsal for those who might take the stage on Oscar night in March. But is that a good thing?

Depends on who you’re asking: For those campaigning, the value is clear. For those watching, well, it might just start to feel redundant. They also came very, very early in the show that somehow kept going past 11pm Eastern (despite the aggressive playing off).

But Carmichael kept the room on edge even well into the show as he came out, some 90 minutes in, holding “Tom Cruise’s three returned Golden Globe statuettes” and suggesting they could be used in exchange for “the safe return of Shelly Miscavige”, Scientology leader David Miscavige’s wife who hasn’t been seen in public for years.

“It’s a good thing Tom’s not here,” Ellis said. It was about something else, technically, but also not.

Later, Carmichael got in an edgy dig in at Will Smith too, saying they gave him the “Rock Hudson award for best portrayal of masculinity on television” during the commercial break.

Carmichael was the live wire that kept the otherwise typical show interesting. WHAT would he say next, everyone wondered? He made Ricky Gervais look tame. Because aside from Carmichael’s go-for-broke unpredictability, the 80th Golden Globe Awards was just that: Typical.

There were truly moving moments and truly boring ones too and it stayed past its welcome and got less and less climactic as the night went on. Who made the decision to present most of the major film awards at the beginning of the show? By the time Eddie Murphy finally got his Cecil B DeMille honour and got in his own dig at Smith, it felt as though the show was already on its fourth ending. But there were still honours, the obligatory HFPA president speech and a shouting Quentin Tarantino to come.

What do we really want in an awards show? It’s the big, existential question that doesn’t just plague the Golden Globes. A little dose of Coolidge, Regina Hall and a hungry Mike White never hurts. But the fact remains: It’s hard to throw a comeback party on a Tuesday.