THE WASHINGTON POST – If you follow comedian and writer Alison Leiby or pastry chef Natasha Pickowicz on Instagram, you’ve seen it: A sandwich fat as a softball, an explosion of green leaves and sprouts, with a stripe of beige (usually turkey and cheese), a few slices of avocado, and maybe some cucumber or something else with lots of crunch. It’s a salad in sandwich form, and it’s a signature of their long-lasting friendship.

It was late summer 2002 at Cornell University when the two first met on their way to a crew event. “Rowing brought us together, but after that one conversation, I just knew, okay, this person is going to be one of my best friends,” Leiby said.

A year later, when they were both unceremoniously cut from Cornell’s rowing team, they soon realised they had a lot more in common than a desire to speed through water at a steady clip. They shared a major (English), an itch to compare “mundane” details of their lives (“We always know what the other person is having for every meal of every day,” Pickowicz said), and a sandwich style.

They started meeting up for lunch at a campus cafe called Cascadeli, where the sandwiches were big, thick, full of crunchy vegetables and wrapped in white butcher paper before being sliced in half. “It was the kind of sandwich where you could have half for lunch, and it would stay nice and crisp so you could have the other half for dinner,” Pickowicz said.

The two shared a dislike for soggy sandwiches, sandwich spreads – “we are not mayonnaise or mustard people”, Leiby said – bread that’s too strongly flavoured or textured, and sandwiches with too much meat and cheese. 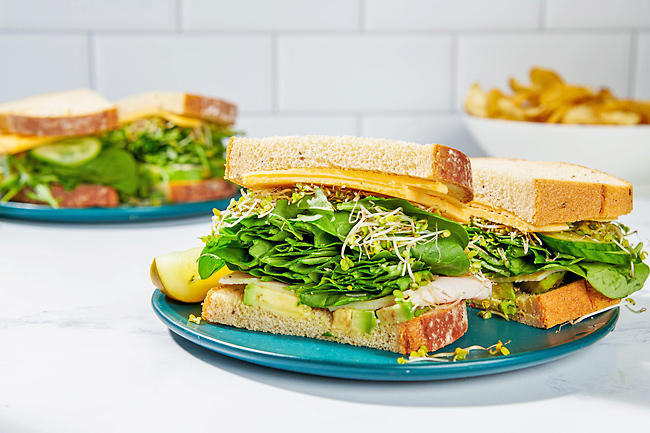 These sandwich preferences helped strengthen their relationship over the years. From freshman year on, they’d make their ideal sandwich – a bit of thinly sliced turkey, a little cheese, ripe avocado and a mountain of greens – in dorm and group house kitchens. After college, they both eventually ended up in New York City, and kept the sandwich tradition alive in tiny apartment kitchens, always sharing photos and notes on where to get the “good turkey” and the “right bread”.

Today, the two frequently meet for picnics on the beach or in the park, in a backyard or on a rooftop to share food, and often it’s this sandwich, the friendship sandwich, that’s the star of the menu. When they’re apart, they share photos of their sandwiches with each other. Pickowicz even has a photo album on her phone called “friendship sandwich”.

Today, almost 20 years to the day since they first met, the sandwich keeps them close. The two both frequently travel for work and life, with Leiby’s hit stand-up show taking her to Los Angeles, and Pickowicz having organised bake sales in support of Planned Parenthood funds on both coasts. When they’re on the road, the sandwich makes appearances on Instagram, with each of them tagging the other in photos and Instagram stories of it, letting the world get a little taste of their friendship, too.

Like a relationship that you need to tend to, this is a sandwich that requires care. It only contains a few ingredients, so the texture and flavour of each matters. Look for roasted turkey that hasn’t been soaked in a salt solution. Seek out soft rye or semolina bread, so you don’t have to struggle to take the first bite. Layer on the freshest arugula or other lettuce, for maximum crunch. Do not skimp on the avocado, so the sandwich has just a touch of creaminess. Season it as you build the sandwich to ensure every bite has good flavour. Finally, make a second sandwich, so there’s one for you and one for a dear friend.

This sandwich’s signature is its ratio of greens and vegetables to meat and cheese. It’s four-to-one, greens to protein, and will make you feel like you’re eating a salad. It’s inspired by a sandwich made by long-time friends pastry chef Natasha Pickowicz and writer-comedian Alison Leiby. Crunchy and filling, it’s also an incredibly refreshing take on a picnic lunch, one that incorporates layers of flavour but doesn’t feel heavy. The creaminess of the cheese and avocado act as a spread for the bread, negating the need for mayonnaise or mustard.

If you cannot have gluten, use a gluten-free bread or wrap.

No avocado? Skip it, or consider replacing it with a touch more cheese.

Not a meat eater? Omit the turkey. Add a smear of hummus for a little protein.

This sandwich doesn’t have a spread because of the creaminess of the avocado and cheese. That said, feel free to add one if you’d like.

DIRECTIONS
On a cutting board, lay the bread out. Top one slice, or one half of the roll, with a few slices of avocado. Top the avocado with half of the turkey and lightly season with salt and pepper.

Layer on half of the greens, sprouts, cucumber, and lightly season with more salt and pepper.

Top with slices of cheddar. Place another slice of bread atop the cheddar, and press down gently to help secure the bread to the fillings. Repeat with remaining ingredients to make the second sandwich.

Slice each sandwich in half and serve, with pickles and chips on the side, if desired.