At 97, Mahathir is back again in the election race as the head of a new ethnic Malay alliance that he calls a “movement of the people”. He hopes his bloc could gain enough seats in Saturday’s polls to be a powerbroker. Analysts said it is likely to be a spoiler party in a tight race.

Denounced for being an autocrat during his first 22-year rule until 2003, Mahathir was welcomed as a saviour after leading the opposition to oust a long-ruling corruption-stained party in 2018. He became the world’s oldest leader at 92 and was to hand over power to his rival-turned-ally Anwar Ibrahim.

The euphoria was brief as their government fell in 22 months due to infighting. The United Malays National Organisation (UMNO) – which had ruled since Malaysia’s independence from Britain in 1957 until its defeat – bounced back to power but the country has since been rocked by continuous political infighting. In all, Malaysia has had three prime ministers since 2018.

Mahathir, a master tactician, is no stranger to setbacks. He swiftly formed the Pejuang Malay party that now heads a motley bloc known as Gerakan Tanah Air or Homeland Movement. But it seems an almost impossible mission as it’s fielding 116 mostly inexperienced non-political faces including activists, actors and lawyers, and lacks the machinery to reach out to voters.

Mahathir’s star power has also faded and he is up against three established groups including the UMNO-led coalition and Anwar’s Alliance of Hope. Still, his party may further split votes that could tip the balance in a tight race and his return cannot be ruled out. 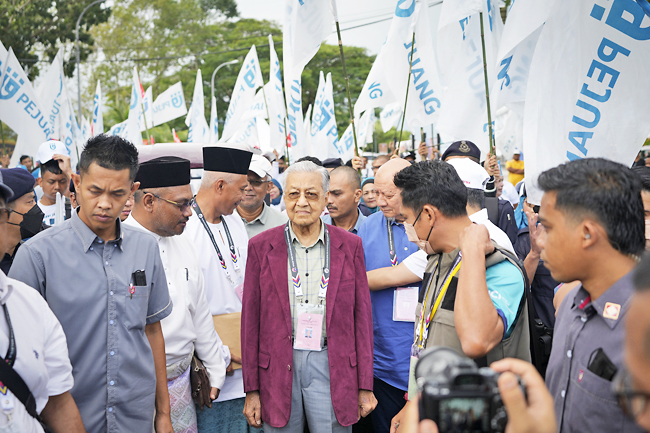 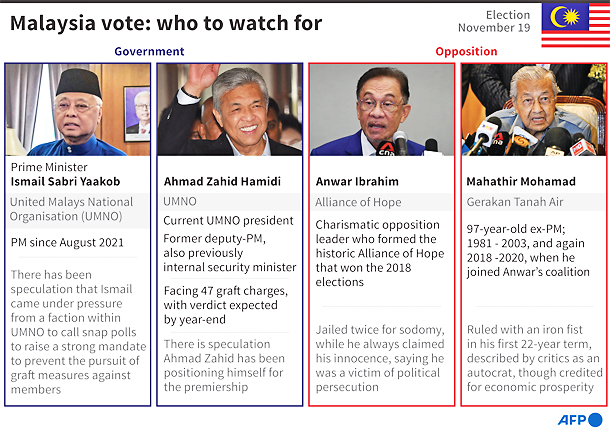 “Malaysia’s political landscape is so fragmented that even Mahathir’s chances of returning to power, however minuscule it may appear, could not be discounted, especially when no single major coalition is likely to win an outright parliamentary majority and a compromise leadership figure may be needed,” said Oh Ei Sun of the Singapore Institute of International Affairs.

Mahathir is the last of a generation of old guards in Southeast Asia, which boomed economically under their authoritarian leadership and came to be known as the “tiger economies.” Indonesia’s Suharto died in 2008 and Singapore’s Lee Kuan Yew in 2015.

A maverick in the early days of his political career who survived expulsion from UMNO, Mahathir was the first commoner to become prime minister of Malaysia in 1981.

While credited with Malaysia’s growth into a modern economy, his dominance was so stifling that critics once labelled him the “Great Pharaoh.” Opponents had been detained without trial, the media muzzled and a system of economic privileges for the Malay majority remained entrenched.

During the 1997-98 Asian financial crisis, he fixed the Malaysian ringgit to the US dollar in a go-it-alone approach that triumphed when Malaysia recovered faster than its neighbours.

This sparked a fallout with his deputy and longtime protege Anwar, who was sacked and later imprisoned on sodomy and corruption charges that critics said were politically motivated. Anwar’s treatment sparked massive street protests and a reform movement that later rose into a major political force.

But there are no permanent enemies in politics. The pair made up ahead of 2018 polls as a massive scandal involving the 1MDB state investment fund impelled Mahathir back into the political ring. Anwar was then serving time on a second sodomy charge he said was also trumped up. Mahathir’s aura as an elder statesman gave many Malays the courage to abandon UMNO, long perceived as a defender of Malay rights, and led to the country’s first regime change. In his second stint, Mahathir oversaw a partial cleanup of the government.

Former prime minister Najib Razak, whom he once supported for the top job, was imprisoned in a court case linked to the 1MDB saga and faces several other 1MDB trials.

A promised transition to Anwar, who was pardoned shortly after the polls, never happened as the government unravelled after Mahathir’s Bersatu party defected in early 2020.

Mahathir also resigned abruptly in protest of Bersatu forming a new government with UMNO and others. He was then sacked from Bersatu. Refusing to join Anwar’s bloc, he went his own way.

“Longevity allows me to continue fighting,” Mahathir said in a recent video on Facebook to explain why he isn’t bowing out of politics. “If I want others to fight against kleptocrats and state bandits, I must join.”

Mahathir, who has a history of heart ailments and had a heart scare earlier this year, is still in good shape and remains sharp-witted. He is defending his seat on the northern resort island of Langkawi. His son is also running.

He touted his alliance as a clean Malay movement opposing corrupt UMNO Malays, who under Najib are accused of plundering coffers and raising the national debt. He warned a UMNO victory is a victory for corruption because party leaders would get off the hook on graft charges. Najib himself may be pardoned and have other 1MDB charges dropped to return as premier, he said.

“In the future, there may be a convicted criminal who becomes PM in this country. Do voters want this to happen?” Mahathir said.

The response to his election campaign has been lacklustre.

He tried to extend an olive branch to Anwar’s bloc and Bersatu to form a united front against UMNO but was spurned. While success may be insurmountable this time, it will not be the last of Mahathir – once described by Anwar as an “indefatigable fighter”.

“As long as I live, I will continue to fight and this struggle is not over yet,” Mahathir said.