THE WASHINGTON POST – Dogs see the world through their noses. Their exceptional ability to recognise specific scents – vastly better than humans’ – helps them find bombs, guns, drugs and human remains, and point to some diseases.

Now a study has found that dogs can do something just as remarkable: sniff out stress in people. The dogs were able to smell changes in human breath and sweat, and – with high accuracy – identify chemical odours people emit when feeling stressed.

The findings provide “deeper knowledge of the human-dog relationship and adds to our understanding of how dogs perceive and interact with human psychological states”, said Clara Wilson. Wilson, a doctoral student in the Queen’s University Belfast school of psychology, is one of the study authors.

Noting that earlier research using sniffer dogs and human biological samples mostly involved detecting illness, she added that it is exciting to see that “they can smell other parts of the human experience”.

The latest research adds to a growing body of evidence related to dog behaviour – how dogs see, think and smell – and their positive psychological effects. Dogs can make people feel better by relieving anxiety and symptoms of depression. 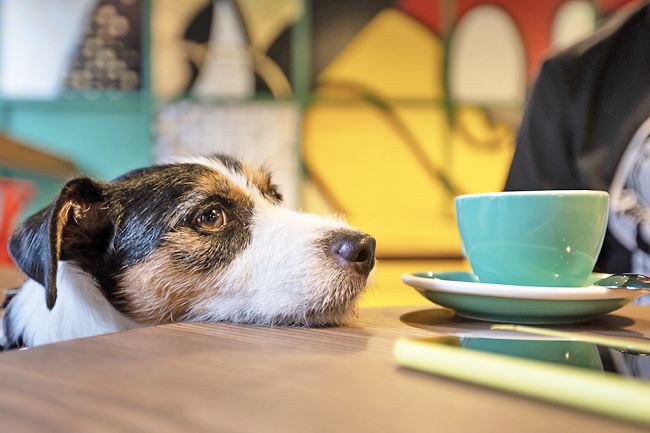 It’s why they often are used to support people with anxiety disorders or those recovering from trauma. The ability of dogs to smell human stress could prove valuable in training service and therapy dogs, who now largely respond to visual cues, researchers said.

“I think this work helps confirm that dogs can be savvy in reading our emotional states, and this study in particular shows that this could be done through scent cues,” said Nathaniel Hall.

Hall, who is Director of the Canine Olfaction Research and Education Laboratory at Texas Tech University, was not involved in the study.

“The results seem to reinforce what a lot of owners feel: that their dog can be quite sensitive to their emotional state.”

There are many anecdotal stories shared by pet parents of such moments. Ben Goldberg, of Scottsdale, Arizona, recalled how Yadi, their mini goldendoodle, crawled into his wife’s lap after they learned that an initial fertility treatment had failed. (The couple now has a 10-month-old son.)

“He immediately sensed she was upset,” Goldberg said. “Yadi recently did the same thing again. My wife found out last month that her grandmother had passed away and, as soon as the call ended, he immediately curled up into her.”

Victoria Allen, of Goochland, Virginia, tells a similar story about her mutt, Spes.

At a beach, she and Spes came upon a group of young people, one of whom was crying.

“Spes ignored everyone else and immediately went to the crying young woman to see her,” Allen said.

“She loves people, so it was not surprising, but in this case it was clear that this woman was the only person she wanted to see. Spes moved directly toward her, with no hesitation, and just nosed her hand.”

In real-life settings, dogs probably use a variety of contextual signals such as our body language, tone of voice or breathing rate to help them understand a situation, Wilson said.

The study results “provide firm evidence that odor is also a component that dogs can pick up on”, she said.

The study did not determine whether the dogs could identify human emotions, that is, recognise whether participants were feeling happy, sad, angry or fearful, for example – only that they were experiencing stress as measured by the physiological signs of increasing heart rate and blood pressure.

“The dogs can differentiate something about human odors in stressed vs non-stressed states, but not necessarily that they know anything about how a person is feeling, or what it means when the humans are stressed,” said Evan MacLean.

MacLean, Director of the Arizona Canine Cognition Center at the University of Arizona, was not part of the study. “They might – but we just don’t know that from this study.”

The researchers collected sweat and breath samples from human participants before and after giving them a difficult math problem to solve and used only samples from those who showed increases in blood pressure and heart rate – signs of stress from performing the task.

Later, each dog was presented with breath and sweat samples from the same participant before and after experiencing stress. The dogs correctly alerted the researchers to each person’s stress sample in nearly 94 per cent of the 720 trials, Wilson said. She said she hopes future research can determine if the dogs can distinguish between positive and negative stress.