AFP – A state funeral for assassinated former prime minister Shinzo Abe has become a lightning rod for controversy, prompting demonstrations and even an apparent act of attempted self-immolation.

But why has the funeral become such a hot-button issue?

Abe was shot dead on July 8 by a gunman in the Nara region as he campaigned for his ruling Liberal Democratic Party (LDP).

His suspected murderer reportedly resented the Unification Church because his mother had made hefty donations to the sect, and believed Abe was linked to the group.

A private funeral for Abe was held in Tokyo, attended by friends and family. Thousands lined the streets nearby to offer prayers and flowers.

Japan has only held one other state funeral for a former prime minister in the post-war period, that of Shigeru Yoshida in 1967. 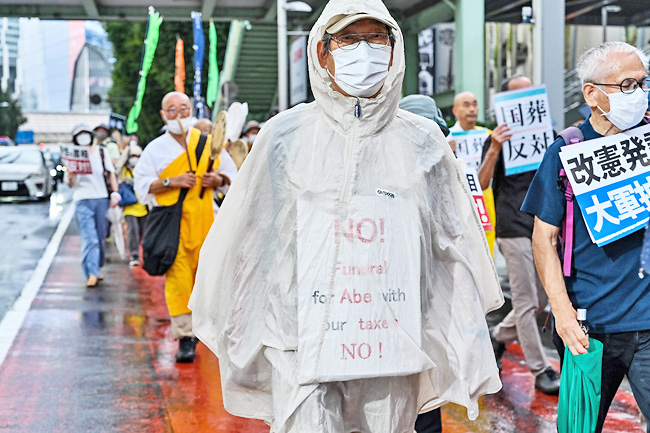 But Abe was Japan’s longest-serving prime minister and the country’s best-known politician, both at home and abroad.

Prime Minister Fumio Kishida has said a state funeral will allow international leaders to offer condolences and show “Japan will not give in to violence”. The event is set for September 27 at Tokyo’s storied Budokan venue, with US Vice President Kamala Harris and Australian Prime Minister Anthony Albanese among the leaders expected to attend.

Controversy about the decision erupted quickly, with opposition politicians arguing Kishida was overstepping his powers by approving the funeral.

“He thought the Cabinet has the right to decide on what kind of events it holds,” professor emeritus of international politics at the University of Tokyo Yoshinobu Yamamoto told AFP.

“But there is no formal system in Japan that defines state funerals. So what the opposition says is that his government has to seek Parliamentary approval after debate.”

Polls have shown opposition growing steadily. National broadcaster NHK found 38 per cent of respondents were against the plan in July, but by August that figure had grown to 57 per cent.

Yamamoto said the funeral has become controversial for two main reasons: “questions around Kishida’s decision-making… (and) the issues around the Unification Church and its links to the LDP.”

After Abe’s death, the LDP revealed around half its members had links to the controversial sect, whose followers are sometimes dubbed “Moonies” after the group’s founder Sun Myung Moon.

Abe was also far from universally popular in Japan, despite his record-breaking tenure. His nationalist views and persistent allegations he was involved in cronyism engendered deep-seated antipathy towards him. “He is seen as the nemesis” by some in Japan, said a political psychology professor at Reitaku University. “His state funeral is, in a way, used by his political foes as a weapon to galvanise their bases.”

The funeral will cost around JPY1.7 billion (USD12 million), according to the government.

That is vastly more than the initial JPY250 million figure mooted by the government, which excluded costs for security and hosting foreign dignitaries.

“That didn’t give a good impression in terms of transparency, either,” said Yamamoto.

Kishida has acknowledged the discontent about the funeral and answered questions during a televised special session of Parliament, but polls show he has done little to move the needle. However, with invitations also sent out and security operations under way, “cancellation is not an option”, Yamamoto added.