Tedarus ceremonies were held across mosques, suraus and religious halls nationwide starting Saturday, with the Omar ‘Ali Saifuddien Mosque in the capital as the focal point.

The ceremony began with the recitation of Surah Al-Fatihah by the minister, and continued with the Tadabbur Al-Quran by Religious Teachers University College of Seri Begawan (KUPU SB) lecturer Dr Nazirul Mubin bin Ahad.

The Tedarus began with the recitation of Surah Al-Baqarah and Selawat Tafrijiyyah led by Omar ‘Ali Saifuddien Mosque officers, before concluding with the Doa Peliharakan Sultan dan Negara Brunei Darussalam.

Tedarus ceremonies at mosques, suraus and religious halls are held to enliven the holy month of Ramadhan. These venues are open for Muslims to perform I’tikaf (spending time at the mosque) to recite Al-Quran, multiply pious acts, glorify the holy month with religious activities and seek forgiveness from Allah the Almighty.

The Ministry of Religious Affairs (MoRA) through the Mosque Affairs Department organised the Tedarus opening with cooperation from the Omar ‘Ali Saifuddien Mosque and Radio Television Brunei. 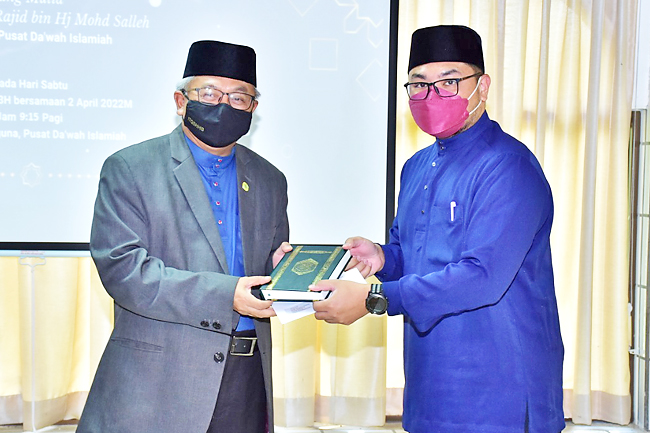 The ceremony opened with the recitation of Surah Al-Fatihah led by the host, and continued with the BDWC administrative board members reciting Surah Al-Baqarah Juzuk 1.

Eighty members from 13 associations under BDWC participated in the event, which included a recitation of Tahlil and Doa. Attendees included the BDWC president, association presidents, guests from the Kampong Manggis Women Bureau and Muslimah of Suri Seri Begawan Raja Pengiran Anak Damit Mosque.

Similarly, the Islamic Da’wah Centre (PDI) is conducting Tedarus activities with converts at selected locations throughout the month.

The centre is also providing contributions of refreshments for these religious events to recipients which include mosques, suraus, religious halls and dakwah posts.

The ceremony began with the recitation of Surah Al-Fatihah and concluded with a Doa read by PDI Officer Haji Mohammad Nazir bin Haji Othman.

The ceremony conducted by Tarbiyah Muallaf allows converts to appreciate the fasting month together, while developing their interests in Al-Quran recitation and instilling Islamic teachings in their daily lives.

On Thursday, Tarbiyah Muallaf in collaboration with the Dakwah Unit held an online Tarbiyah Ramadhan with converts at the Mushalla Al-Ameen at PDI.

The programme was a follow-up to the distribution of Practices in the Month of Ramadhan posters of the Fathul Barakah 3.0 Project for converts.