Talk focusses on morality among youth

A religious talk titled ‘Hindari Budaya Songsang’ was held for 373 students at Ma’had Islam Brunei in the Tutong District yesterday.

The talk, part of the nationwide religious programme for religious and Arabic schools for the month of August, touched on issues relating to unhealthy relationships such as same-gender copulation and having sex with multiple partners, which have led to perverse cultural understanding and are contrary to religious teachings, humanity and the family system.

“Those who choose to be a part of this unhealthy or abnormal culture are disrespectful of family and religious institutions as well as our culture and customs,” said speaker Muhammad Nur Hidayat bin Haji Meraji @ Marajah.

“In an effort to develop and maintain good moral values, teenagers who have got themselves immersed in the abnormal culture need to return to their parents or guardians and realise that their actions are wrong and sinful. Among the factors spurring the abnormal culture are individual impulse, childhood trauma, opportunity, deviant sex education, negative influence of mass and electronic media,” he added.

The programme began with the recitation of Selawat Tafrijiyyah and Sayyidul Istighfar led by Year 9 Mukhlis student Ameer Jazli bin Azlan, while a mass recitation of Surah Al-Mulk was led by Ariffin bin Haji Hamid. 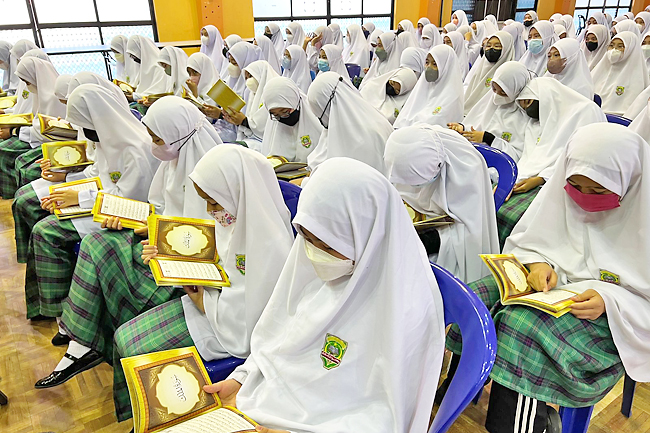