LAS TEJERÍAS, VENEZUELA (AP) – A day after burying his mother, Rafael Negrín on Wednesday carried the coffin of his aunt who also died in floods and landslides in central Venezuela that killed at least 43 people and left dozens missing.

In total, Negrín lost three family members – his mother and two of her sisters – who were swept away by floodwaters in Las Tejerías de Santos Michelena, an agro-industrial municipality in the state of Aragua, about 54 miles (87 kilometres) from the capital of Caracas. The body of the second aunt has yet to be found.

The flooding and landslide followed torrential rains that caused a mountainside to collapse on the town late Saturday. Residents said they had just a second to escape to safety before the water, mud, rocks and fallen trees descended on their neighbourhoods.

“It’s very painful,” said Negrín, who is also sad at seeing the place where he grew up destroyed. “The rest of us were saved, my daughter was saved.”

Venezuela’s civil protection agency says 400 houses were destroyed and 800 others were damaged. Fifty-six people are still listed as missing. 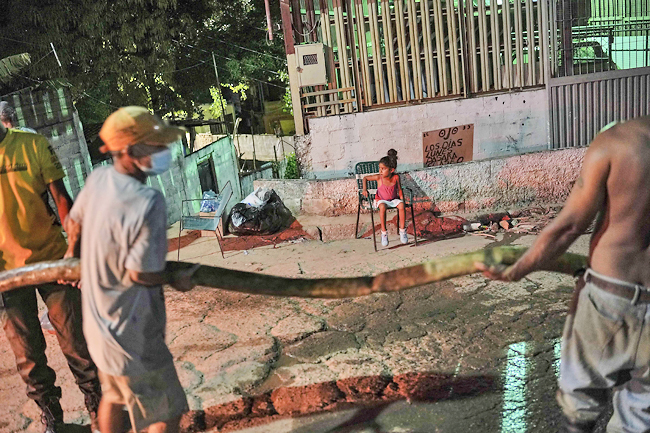 Authorities said the death toll is expected to climb as heavy machinery moves debris left by the landslides and flooding.

Negrín said that while he is sad, at least he found the body of his mother, Senobia Rodríguez Agrizones, and was able to bury her on Tuesday. He said neighbours were still searching for their mother.

“My mother is there. We know she is there,” he said. “Now we must recharge our strength for our nephews, for our children.”

With many businesses and services destroyed in the municipality of 54,000 people, the survivors are struggling to get by in the disaster areas.

Electricity and mobile telephone service have been restored to Las Tejerías, but landlines and water service remain down as the landslide destroyed telephone wires, water pipes and pumping equipment.

Authorities estimated two dozen businesses and companies were affected, including a Chinese-made Chery vehicle assembly plant as well as a high school and two primary schools.

Most of the people reported as missing, including many children, are from the El Béisbol and La Agotada neighbourhoods to the north of the municipality.

President Nicolás Maduro, who walked one of the most flooded streets on Monday with his wife, Cilia Flores, has promised to support the residents of Las Tejerías.

He said his administration would rebuild homes and businesses and help those who want to leave the affected area move elsewhere. Several shelters and aid collection centres have been set up near Las Tejerías.