VAVUNIYA, SRI LANKA (AP) – Rasarathnam Anushiya once had a mission: She awaited orders to blow herself up as a suicide bomber during Sri Lanka’s civil war. Years on, her struggle now is to feed her three children during the country’s unprecedented economic crisis.

Anushiya, 36, was arrested in 2009 when government troops defeated the Tamil Tiger rebels, who had sought to create an independent homeland for minority Tamils. She had been a member of the rebels’ dreaded suicide squad known as the Black Tigers, and spent the next five years under government questioning and later at a rehabilitation camp.

She learnt dressmaking in the rehabilitation centre but was unable to build a profitable business after her release and relied on her husband’s salary from his job at a finance company as she devoted herself to raising their children.

Her husband, like many people, lost his job as a result of Sri Lanka’s current economic crisis. Families across the nation have been forced to cut back on food and other vital items because of shortages of money and high inflation.

For weeks, Anushiya has had to feed her 11-year-old son and eight-year-old daughter only rice and either potato curry or tomato curry. The couple’s three-month-old baby is still breastfed. While her daughter receives school lunches sponsored by the World Food Programme (WFP) and the Ministry of Education, her son does not because the programme only covers children from Grade one to five. Anushiya also is heavily in debt to micro finance companies and is often hassled by creditors waiting by her home. She can’t afford to pay the rent, and the house owner has asked the family to leave by the end of December. 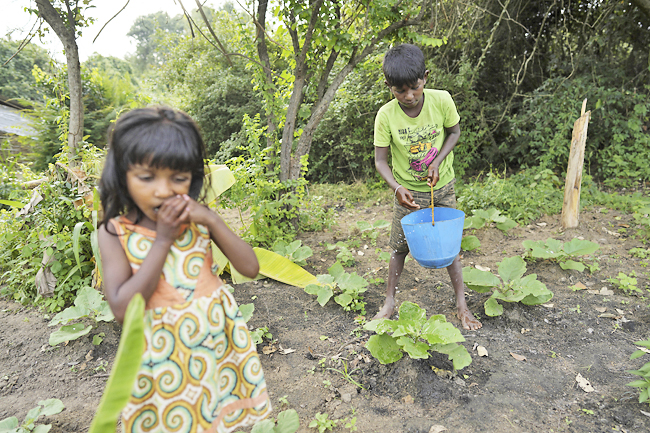 In another village, Dimbulagala, primary school children receive a free breakfast, a glass of milk and lunch with help from the education ministry, WFP and a private donor agency.

Mothers of students prepare the meals at school with a menu provided by the education ministry. Each meal costs USD0.27.

School principal Anusha Sirimanne said attendance has improved since the meal programme began 20 weeks ago. Before, she said, many children fell asleep during classes and had trouble concentrating, but since the programme started, they are more alert and physically active.

“Most would not attend school without the feeding programme, and eventually the school would have to close,” she said.

SM Madushanka Kumara, the father of three children in Dimbulagala, said his family can only eat once or twice a day since he lost his job at a bakery when its owner decided to close it after prices of ingredients sharply increased.

“We can’t think about balanced diets,” said his wife, Malkanthi. “My 12-year-old son cried, saying his head hurt and he was hungry. I had nothing to offer. Today for lunch I gave him rice with okra curry, which I made from two okras I picked in the backyard.”