A total of 25 officers and staff from Balai Khazanah Islam Sultan Haji Hassanal Bolkiah (BKISHHB) took part in a Fire Marshal course from May 23 to 25 at the BKISHHB organised by the Public Relations Division of Operation ‘A’ Branch of the Fire and Rescue Department (FRD).

Meanwhile, three staff members of Teratak Mumin Family Foundation (Teratak MFF) took part in a Fire Marshal course from May 24 to 26 organised by the Public Relations Division of Operation ‘G’ Branch of the FRD.

The participants also visited the Rataie Fire Station where they were introduced to an array of fire fighting equipment. Participants were also exposed to the importance of fire safety in theory and practice, such as the common causes of fire; action needed when facing a fire incident at the workplace including carrying out a systematic building evacuation; correct way to use a fire extinguisher and fire blanket and how to save themselves and rescue those trapped in a building during a fire.

The FRD provides Marshal course, Life Saver 995 and fire safety briefings to raise awareness on safety in emergency situations and the proper way of using a fire extinguisher. 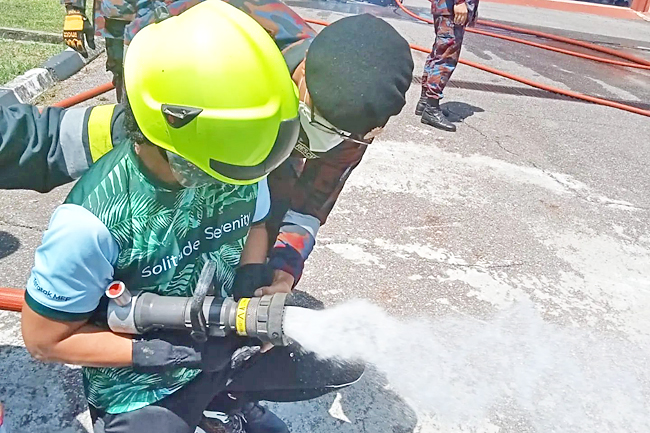