DOHA, QATAR (AP) – England forward Raheem Sterling (AP, pic below) has left the team’s World Cup camp in Qatar and returned to Britain after a break-in at his home.

The 27-year-old Chelsea player missed England’s 3-0 victory over Senegal in the round of 16 on Sunday and it was not known if he would be back for the quarterfinal match against France on Saturday.

“We’ve got to give him time to try to resolve that or be there for his family,” England coach Gareth Southgate said.

“That’s the most important thing at this time, so we’re going to give him that space.”

England announced 90 minutes before kick off against Senegal at Al Bayt Stadium that Sterling would be unavailable because of a “family matter”. 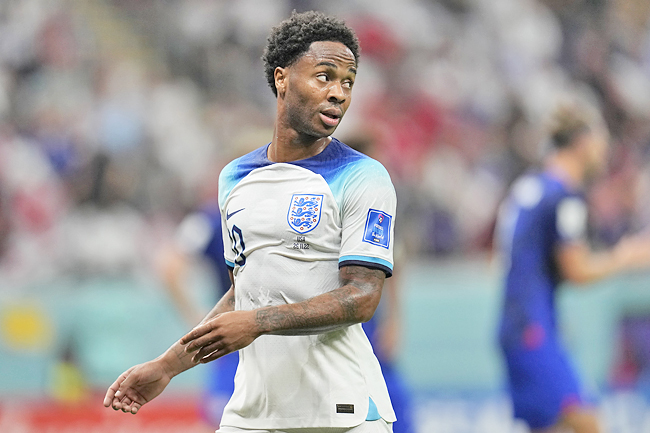 Police in the English county of Surrey outside London said in a statement they were investigating “a burglary at an address in Oxshott, Leatherhead”.

The statement said police were contacted on Saturday night “after the occupants of the property came home and discovered a number of items including jewellery and watches had been stolen.

It added, “No threat of violence was involved as the items were discovered stolen retrospectively. Inquiries into the circumstances are ongoing.”

The police later issued an update to say they were still investigating when the theft happened, and responded to reports that the thieves were armed.

“We are aware of media reports stating there were armed suspects involved, however, at this time, we would reassure our communities that no witnesses have come forward to this effect and there are no reports of any threats of violence linked to this incident,” the statement said.

“Our thoughts are with him and his family,” England captain Harry Kane said. “It is a private matter, but it’s never easy to see one of your teammates and friends have to deal with something like that.”