POÇOS DE CALDAS, BRAZIL (AFP) – On a concrete playground in a poor hillside neighbourhood in Brazil, ecstatic children are chasing a ball at top speed.

But in an unusual scene for the football-mad country, they are indifferent to the goalposts nearby, instead swinging cricket bats and fielding drives.

Welcome to Pocos de Caldas, a city of 170,000 people that is the capital of a lovably quirky quest to turn the land of Pele and Neymar into a passionate cricketing nation.

Defying stereotypes, Brazil is emerging as a force to be reckoned with in cricket, especially the women’s national team, who were given professional contracts in 2020 – making the country the first in the world to take its women’s team pro before the men’s.

Most players have learned the game from 63 community youth programmes run by the organisation Cricket Brasil, whose president is ex-professional cricketer Matt Featherstone, an Englishman who married a Brazilian and moved here two decades ago.

“My wife thinks I’m mad” for trying to get Brazilians playing cricket, joked Featherstone, 51, a strapping sportsman with infectious enthusiasm. 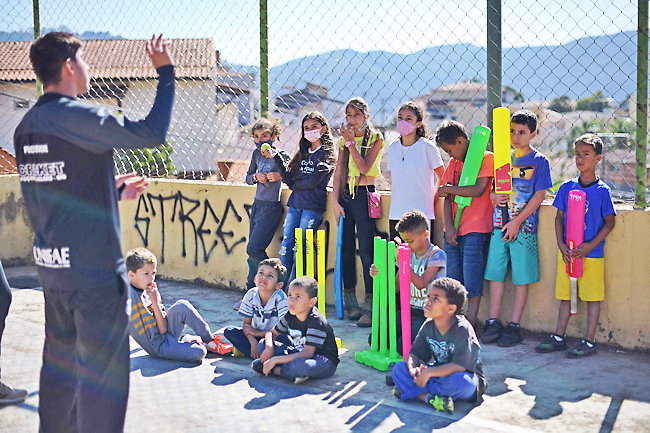 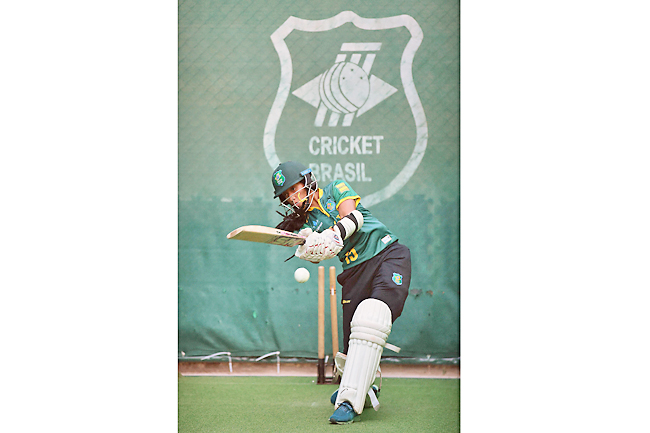 But his charisma and community spirit have turned Pocos de Caldas, a tiny spa hub nestled in the green mountains of southeastern coffee country, into what Mayor Sergio Azevedo boasts is “the only city in Brazil where more kids play cricket than football”.

When Featherstone moved to Brazil in 2000, he tried spreading his love of cricket at private schools, but soon realised he was competing against rugby, hockey, sailing and “everything else you can imagine”, he said.

But in poor neighbourhoods, where the options were “football or football”, he discovered families were elated to have a new sports programme.

Unlike in England, where cricket is sometimes seen as a game for rich men, “here we have a blank piece of paper to invent cricketing culture as we wish”, he said.

“It wasn’t the best impression,” laughed the 36-year-old.

“I didn’t understand it, I just saw all these people dressed in white. And it seemed to last forever.”

But she noticed the sport was similar to a Brazilian street game she liked, known as “bats” or “taco”.

The story goes that Brazilian slaves invented the game, played with broomsticks for bats and bottles for wickets, after seeing cricket played by Brits brought over to build Brazil’s railroads in the 19th Century.

The enthusiasm and openness at Cricket Brasil ended up winning her over, said Moretti Avery, a petite dynamo with a wide grin and a mean swing honed by playing golf.

Brazil has put its own stamp on cricket. The women’s team play Brazilian funk at practice, samba before matches, and prefer loud parties at the grounds to tea and cucumber sandwiches.

“The way cricket was developed here was really cool. We’ve made it fun,” said Moretti Avery.

Thanks to the community projects, launched in 2009, Pocos de Caldas has more than 5,000 cricket players.

Cricket Brasil wants to reach 30,000 and expand to other cities.

Some are winning international recognition.

Last October, Laura Cardoso, a 16-year-old all-rounder, made world headlines with what one sportswriter called a “miraculous” performance, bowling a hat-trick as Brazil took five wickets in six balls in the final over to win a dramatic one-run victory over Canada in the T20 World Cup qualifiers.

It was a feat never accomplished in a women’s T20 international.

Just back from a stint playing professionally in Dubai, Cardoso, a natural athlete with a powerfully compact physique, could well become one of the world’s top players, Featherstone said.

The young phenom, now 17, takes it all in stride.

“Oh my gosh, what did I do to get here?” she said with a laugh near the national team’s training centre, donated by the city government.

Brazil’s women currently stand 28th in the T20 international rankings, and are aiming a lot higher.

They have won four of the past five South American championships.

And with success comes cash from the International Cricket Council and sponsors.

Cricket Brasil’s annual budget has grown from around USD5,000 a decade ago to USD350,000, enabling the organisation to launch a trainee coach programme and send promising talents to university.

Cricket has been life-changing for players like Lindsay Mariano, 20.

“Before I played, I didn’t even have a passport,” she said, on a break from training for the national team’s upcoming African tour.

“Now, I’ve travelled around the world thanks to cricket.”