Tucked away in the boundless lush mountains, the village was barely known to the outside world five years ago. In 2017, Chen Jian, a villager who had run a successful business elsewhere, decided to return home and start a new business, having witnessed the scene of desolation in the village.

“I’ll refresh the village,” Chen said. “There is definitely no problem in developing rural tourism, as long as we take advantage of the original culture and ecology to renovate the village.”

Chen called on villagers to clean up the place, dismantle the dilapidated cattle pens and dirty and shabby latrines, build parking lots, a square, as well as some farmhouses.

With self-raised funds, Chen and his villagers also built new amusement facilities, and established cooperatives for fruit and vegetable planting and a village tourism development company. 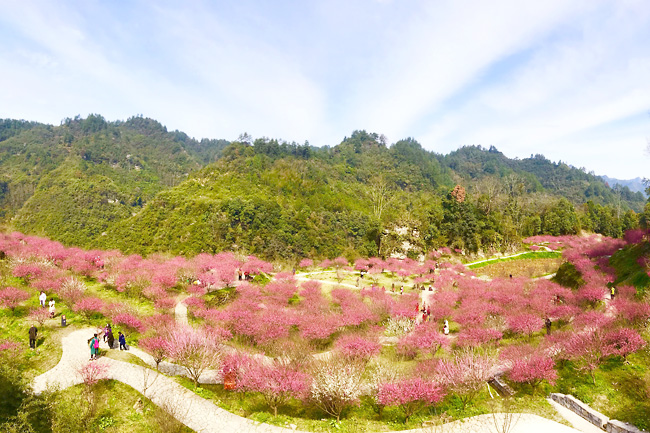 Nowadays, Chenjiapo Village is recognised as a five-star leisure agricultural manor by the agriculture and rural affairs department of Hunan Province.

Last year, Chenjiapo Village saw more than CNY1.5 million of tourism income, and at the end of the year, each of the 29 households received a dividend of CNY20,000. Chen Han, a 33-year-old villager who had been working outside the village for years, returned to his hometown in 2021 and is now an administrator at the village tourism company.

“When I saw the development of tourism in the village, I wanted to come back to work with a stable income while taking care of my family,” he said.

China mapped out a plan for rural development at the central rural work conference held this month, highlighting work to advance rural revitalisation across the board and accelerate the construction of a strong agriculture sector.

Nowadays, many rural areas in China have developed tourism by taking advantage of local conditions, such as ecological tourism and agricultural experience tourism.

Over the past decade, more than 300,000 leisure farms, sightseeing farms and farmhouses that receive tourists have been set up nationwide, with an annual revenue of more than CNY700 billion.