World Migratory Bird Day is an annual awareness-raising campaign that aims to highlight the need for the conservation of migratory birds and their habitats.

According to the Brunei Tourism website, the Brunei rainforest acts as a common stop to a slew of migratory birds due to its strategic location. In addition, the Bird Watching in Brunei guidebook on the website states, “Due to abundance of food supply in Brunei, many species of migratory birds can be seen almost all year round.”

The main days for the international celebrations are the second Saturday in May and October, with this year’s occasion first being marked on May 14, carrying the theme, ‘Dim the Lights for Birds at Night.’

As a press release from the organisers explains, “Light pollution is a significant and growing threat to wildlife including many species of migratory birds. Every year, light pollution contributes to the death of millions of birds. It alters the natural patterns of light and dark in ecosystems. It can change birds’ migration patterns, foraging behaviours, and vocal communication.”

“Attracted by artificial light at night, particularly when there is low cloud, fog, rain or when flying at lower altitudes, migrating birds become disorientated and may end up circling in illuminated areas. Depleted energy reserves put them at risk of exhaustion, predation, and fatal collision with buildings.” 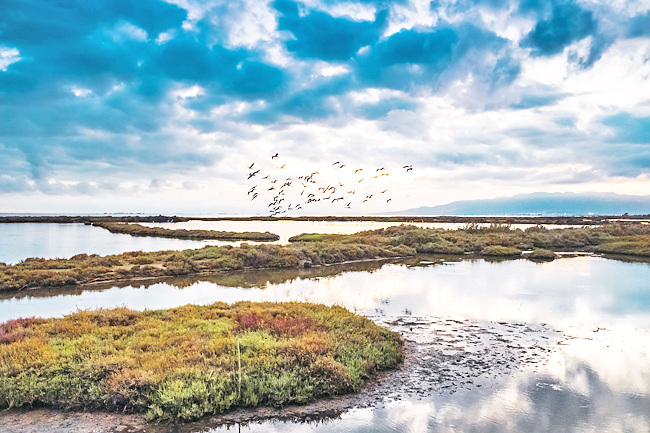 “The theme, ‘Dim the Lights for Birds at Night’, enlightens us on the harmful impacts of the steadily increasing artificial light on biodiversity, including the scores of birds that migrate from north to south,” she said.

Dr Lim underlined that natural light is essential to any species’ survival. “It supports food production, mobility, vision and other physiological processes, as well as ‘adaptation to diurnal and seasonal changes’.

“However, the amount of artificial light – often found in urban and industrial areas – has been increasing by at least two per cent per year, leading to a ‘worldwide phenomenon’ of light pollution or the emission of artificial light at night (ALAN).

“Studies correlate the increased use of artificial light to rapid urbanisation, with cities and industrial zones requiring illumination for operations and protection of human life and property.”

The executive director shared that bright sources such as street lamps, shopping malls, skyscrapers, neon signs, and billboards cast upward light visible at tens or even hundreds of kilometres away.

“The impact of light pollution on biodiversity is serious and can even be grave. Nocturnally migrating birds such as ducks, geese, plovers, sandpipers, and songbirds are vulnerable to light pollution. Excessive artificial light can disorient seabirds such as petrels and shearwaters and cause collisions with brightly-lit ships at sea and various structures on land. Birds can be attracted to artificial light at night, or be averse to it – either way, it can disrupt the migratory routes of these wildlife and even affect their behaviour such as foraging and vocal communication.”

The statement noted that the United Nations Environment Programme (UNEP) and Convention on Migratory Species (CMS) joint resolution during the 13th Conference of Parties stated that even the behaviour of insects, which some migratory species prey on, is also negatively influenced, thus affecting their food and sustenance.

Dr Lim highlighted that, with ASEAN located at the heart of the East Asian-Australasian Flyway, it is essential for the region to raise awareness on the issue of light pollution and its impacts on the scores of migratory birds passing by the flyway.

“At the global level, guidelines and campaigns on light pollution and how it can be reduced are already taking flight, with the CMS endorsing management principles such as promoting natural darkness and the use of adaptive light controls and appropriate materials that only emit harmless wavelengths and keeps light directed to the ground.”

Dr Lim shared that the International Union for the Conservation of Nature (IUCN) adopted a motion on light pollution in 2021 during the IUCN Congress in France promoting dark infrastructure, which identifies natural darkness as an additional quality criterion for ecological networks.

“We at the ACB are keen to support the ASEAN member states in aligning these criteria with existing initiatives integrating biodiversity in cities and urban areas in the region,” she said.

“As a regional centre of excellence for biodiversity, the ACB stands ready to support discussions that can shed light on conservation strategies that take into account light pollution and the significance of natural darkness, whose own conservation value is comparable to having clean water, air and soil.”

Dr Lim shared that the celebrations will provide a bird’s eye view of the emerging and important issue of light pollution. “It is incumbent upon us to learn more and understand deeper the implications of artificial light to the region’s biodiversity, and the migratory birds that our rich ecosystems support.

“From small actions such as dimming our lights at night, to initiating the development of conservation strategies and approaches, we can protect migratory species from the harmful impact of light pollution,” she added.