“Alhamdulillah, throughout my studies at SMALHB, I had the opportunity to gain knowledge in both academic and co-curriculum. I would like to thank the teachers for their guidance and giving me opportunities to polish my skills in school competitions,” said Ahmad Nasharuddin.

A student of leadership qualities, Ahmad Nasharuddin was a cast member in the first Arabic drama Fatihah. The drama received positive reviews from local viewers as the dialogues were in Arabic language which drew the attention of many.

He also performed during the Israk Mikraj celebration in 2020 and recording with Radio Television Brunei (RTB) this year, as well as taking part in a poetry reading at the Islamic Literature Night in conjunction with the Maulidur Rasul in 2020. 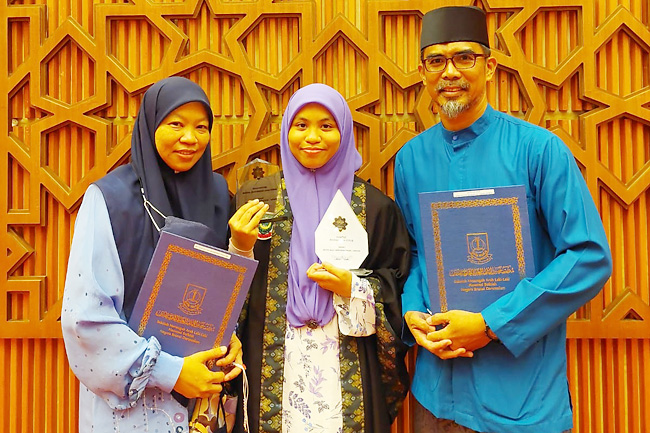 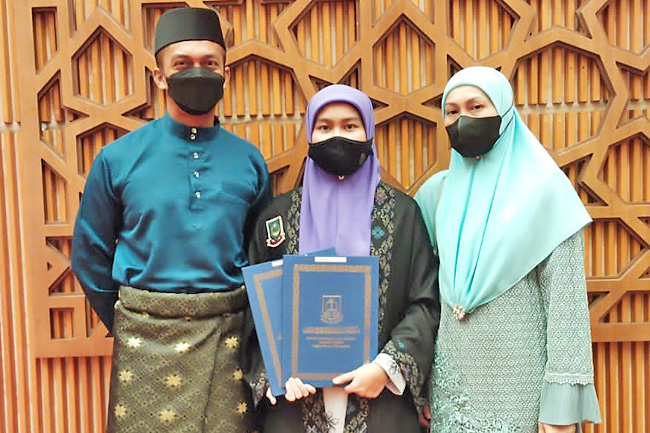 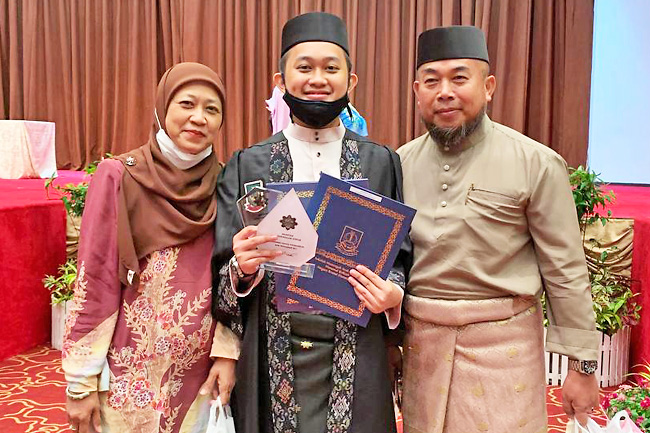 “If I were offered a scholarship, I would like to pursue my studies at the University of Al-Azhar in Egypt,” he said.

Meanwhile, Sarah binti Haji Abdurrahman/Arman, who received a Special Award in Academic and Mumarasah Lughah Arabiah, shared that she is interested in the Arabic language course and finds it fun especially how the language is used in Al-Quran.

Sarah, who was surprised to receive the special award, chose to further study Arabic language abroad. She expressed her gratitude in receiving the award and believed that it was made possible due to support from her parents, families, friends and teachers.

On her exam preparations, Sarah shared, “Time management is important. Do your revisions at least three to four weeks before the exams. Engage in group study and consult the teachers if you need help.”

Fellow recipient in the same category, Filzah Afiqah binti Chuchu, shared that she was a student taking Arabic language course in her pre-university years at SMALHB with her favourite subject being Balaghah.

“Balaghah is my favourite. Studying and understanding the contents in Balaghah was challenging and it pushed me to study harder. As an Arabic linguist, I can improve my writing and information delivery skills as Balaghah focusses on the understanding of rhetorical sentences, word arrangements and meaning as well as the beauty and accuracy of appropriate word selection.”

Filzah Afiqah plans to continue her studies in Arabic language at university.

Special Award in Academic and Leadership recipient Muhammad Haziq Amirruddin bin Mohammad Ali shared that he felt honoured and humbled to have received the award.

During an interview with the Sunday Bulletin, he shared his struggle with exam preparation, saying, “It was difficult for me to juggle between studying and spending time with my family. I spent most of my time on understanding and memorising the subjects day and night. Alhamdulillah, it was all worth it in the end.”

She said the award motivates her to achieve more, adding that the recognition from the teachers and the school as well as her hard work made it possible for her to receive the recognition.

Sharing on struggles during her studies, she referenced the second COVID-19 wave when learning went online and she initially found it hard to adjust.

“However, I took it as an opportunity to learn new things and endured them,” she said.

Nur Izzah intends to pursue her studies at a local university to study Syariah law as she believes that the education in Brunei is comparable to the ones abroad.