DOHA, QATAR (AP) – Son Heung-min (AP, pic below) is likely to mask up as South Korea faces Uruguay in their Group H opener at the World Cup in Qatar.

Son has scored 35 goals in 104 internationals but hasn’t played since November 2 when he sustained a fracture around his left eye in a collision with Marseille’s Chancel Mbemba in a Champions League match.

Son, who tied as Premier League top scorer last season, has said he expects to play with a protective mask. But there have to be worries about how effective he can be – and what the dangers are of playing with the mask, which he has worn in training since arriving in Qatar.

Much of South Korea’s offence is based around Son’s speed, his ability to strike with both feet and accuracy on dead-ball plays. 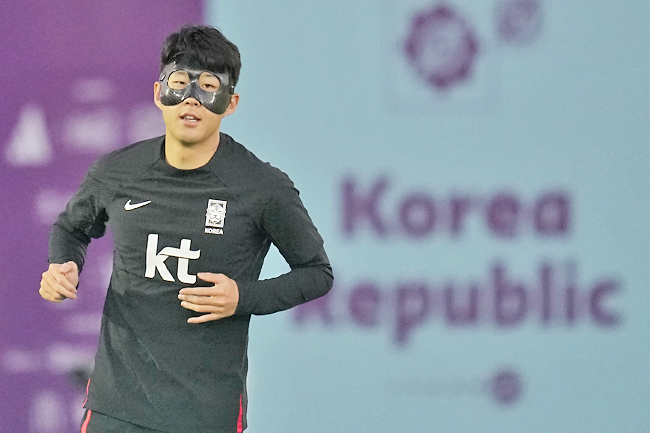 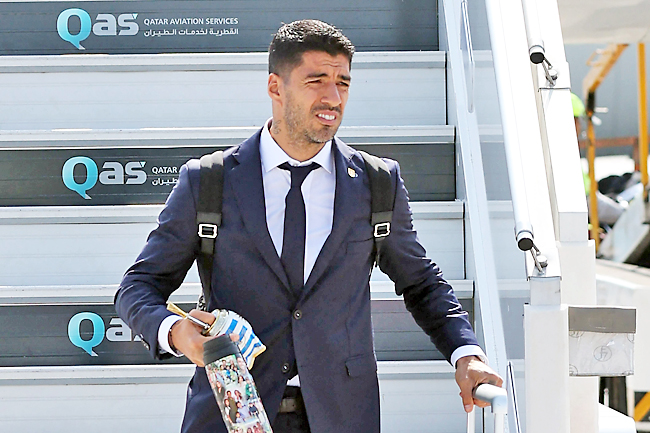 For Uruguay striker Luis Suarez will be playing in his fourth World Cup along with veteran teammate Edinson Cavani. Suarez has scored seven World Cup goals. That is one short of national record holder Óscar Míguez, who played on the 1950 winning team.

Uruguay faces a generational change on the field with veteran players like Suarez and Cavani likely at their last World Cup.

There’s change on the bench, too. Oscar Tabarez is gone and replaced by Diego Alonso, who has little experience at this level. Tabarez led Uruguay at three World Cups but stepped away earlier this year after a series of poor results. It was Tabarez that took the team to the semifinals of the 2010 World Cup in South Africa.

Suarez (AFP, pic above) is infamous for several biting incidents on the field. In a match in the 2018 World Cup in Brazil, he bit Italy defender Giorgio Chiellini on the shoulder. The referee didn’t see the incident, but Suarez faced severe retrospective action and was suspended from football-related activity for four months, slapped with a nine-match international ban and given a big fine.

It was Suarez’s second controversial World Cup moment. In the last minute of extra time at the 2010 quarterfinal match against Ghana, Suarez was sent off after he used his hands to keep out Dominic Adiyiah’s goal-bound header. Asamoah Gyan hit the bar on the ensuing penalty, and Suárez was shown celebrating on the sideline.

Ghana went on to lose the penalty shootout, thereby failing to become Africa’s first semifinalist as the continent staged its first World Cup.

Brazil and Serbia round out Group H, with many viewing Brazil as the tournament
favourite.