Smooth ride in a family-friendly vehicle

A test ride for the all-new Mitsubishi Xpander took place at Mulia Hotel in Berakas for local media members yesterday.

A briefing on the body and technical features of the Xpander was presented prior to the drive by Marketing Executive Ahmad Faezul Imtiaz Adam assisted by marketing team members Eddy Muqri and Hamizah Effendi and sales consultant races, Hadinee and Asmah.

One of the significant features of the new Xpander is its suspension on both front and rear, where the media experienced a much more comfortable ride compared to the previous model.

This is due to the improved front and rear suspension with the adoption of a slightly larger absorber resulting in a flatter and more comfortable ride. Also improvised are the cabin features, which true to its statement, are best-in-class interior space and a layout that let passengers easy access.

Mitsubishi Xpander is known for its family-friendly crossover spacious MPV built with the capability to fit seven people comfortably on the road, unveiling the Xpander with its refreshed design on the exterior and interior functionality.

While three can sit comfortably on the wide second-row seat, access from the second row to the back row is convenient using a tumbling system by folding the second-row seats to access the back row or by folding the second and third-row seats down to create a large flat storage area without bumps or gaps for large loads. The new Mitsubishi Xpander was launched by GHK Motors on October 21 at the Mitsubishi showroom, Beribi. Developed in the pursuit of customer needs, the Xpander series has gained popularity in the ASEAN and other regions around the globe such as Middle East, Latin America and Africa, and has grown to become one of the most important models for Mitsubishi Motors.

The safety features include dual airbags, one for the driver and one for the front passenger, a rear-view camera via digital video recorder (DVR camera), an immobiliser system to enhance car safety from theft and the standard anti-lock braking system (ABS) with an electronic brakeforce distribution (EBD).

Customers are also able to choose optional accessory equipment of auto tailgate to the new Xpander giving convenience to open and close the rear door. 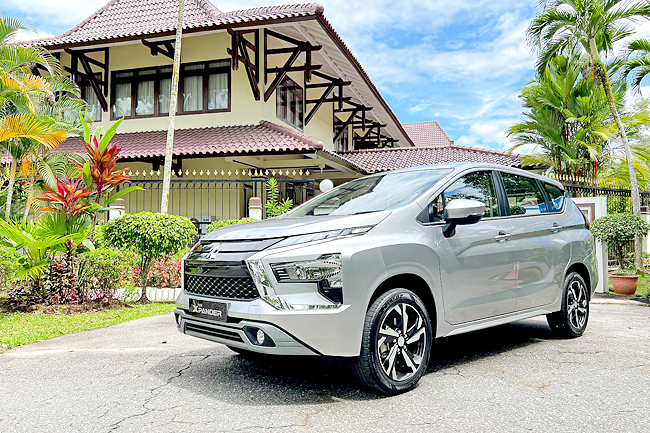