NEW YORK (AP) – Ben Simmons streaked behind the defence and caught a pass in transition that he dunked. About a minute later, he fired a cross-court pass to a Brooklyn Nets teammate for a three-pointer.

Those were the types of plays the Philadelphia 76ers had seen many times before.

Yesterday, Simmons finally made them for another team.

Simmons played against his former club in his first NBA game since June 2021, making him among a number of big names who got back to basketball action.

“I’m grateful just to be able to step on that floor, step on an NBA floor again,” Simmons said. “So I had a lot of fun out there.”

Kawhi Leonard also returned for the Los Angeles Clippers, as did Jamal Murray for the Denver Nuggets, after they both sat out last season recovering from surgeries for ACL tears. 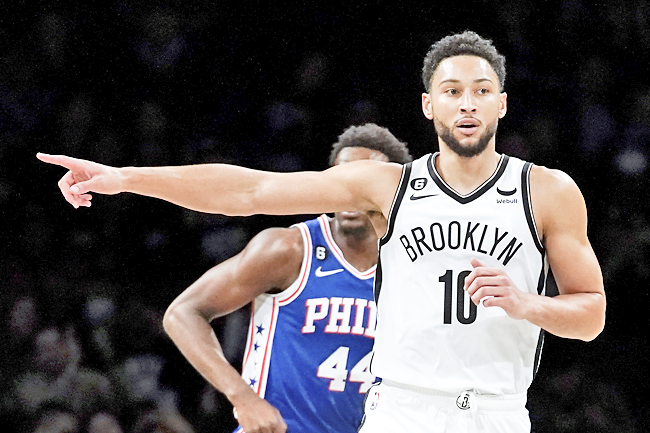 “Just being out there with the guys, talking, I missed it. It was a great experience for me.”

That’s no doubt how their teams felt after expecting to be title contenders last season but instead having those hopes wrecked by injuries. Paul George also missed significant time for the Clippers, and Michael Porter Jr was out for all but nine games for the Nuggets.

They all played on Monday, along with Damian Lillard returning for Portland after missing the final 47 games last season, when the Clippers and Trail Blazers met in a pre-season game.

Simmons hoped he was close to playing last February after getting traded to the Nets in a deal headlined by James Harden.

Simmons had cited mental health reasons in seeking a trade from the 76ers following a disappointing postseason when he took a bulk of the criticism after the number one seed in the Eastern Conference was ousted by Atlanta in the second round.

But a herniated disk kept him from making a late-season debut and forced him to get offseason surgery.

Fully cleared now, Simmons was in the starting lineup and finished with six points, five assists and four rebounds in 19 minutes.