SEOUL (AFP) – On what should have been a night of fun for tens of thousands of Halloween revellers, a bottleneck in a narrow alley of Seoul’s entertainment district instead claimed 156 lives, with analysts and top officials blaming a crowd control failure.

The lack of prior safety planning – officials concede it was insufficient – quickly turned South Korea’s first Halloween free of coronavirus restrictions into one of the country’s worst disasters, with police reliant on passersby to help extract partygoers from the crush.

“In most cases of crowd crushes, it turns out the root cause is a lack of planning,” said Eric Kant who runs the Netherlands-based Phase01 Crowd Management.

With no single organiser, the government did not require any of the entertainment establishments holding events in Itaewon last Saturday to submit a safety management plan.

And even though police estimated beforehand that the boisterous festivities would swell to an estimated 100,000 people, they only deployed 137 officers – compared to the 6,500 sent across town to police a protest a fraction of the size.

As public scrutiny of the crowd policing has mounted, the police chief, interior minister and Seoul’s mayor apologised on Tuesday for failing to prevent the fatal disaster. 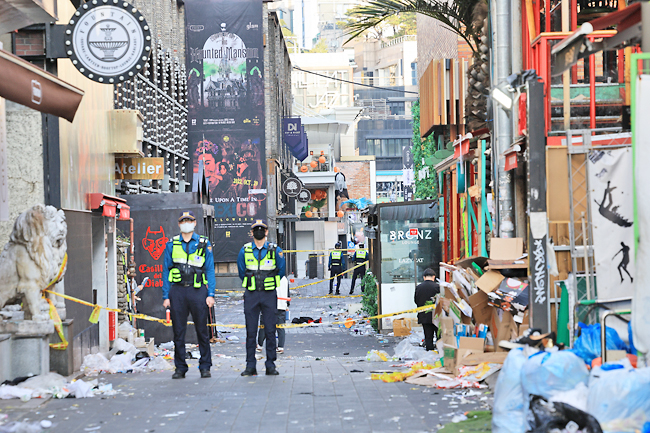 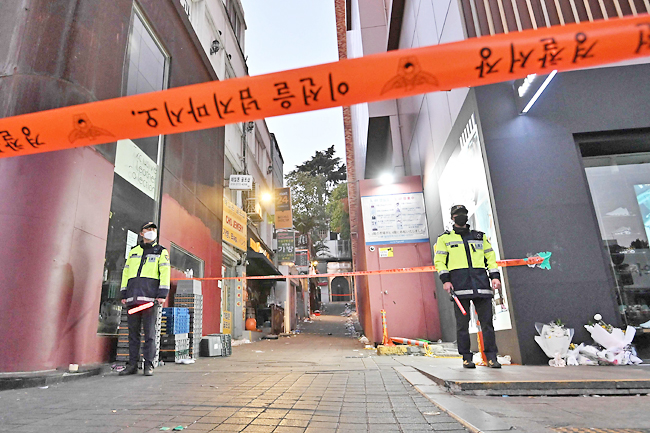 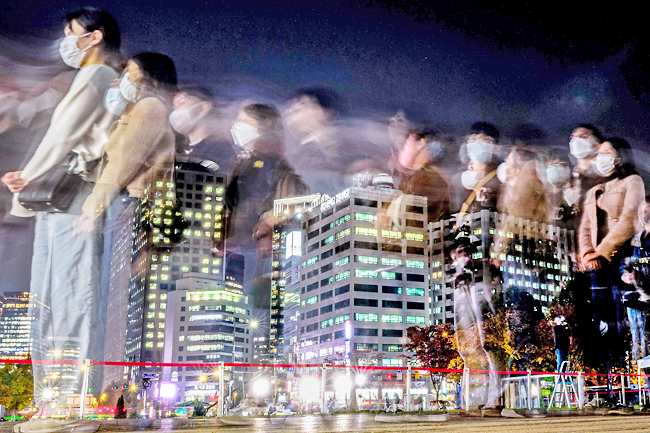 South Korea’s prime minister said on Wednesday that police must explain their slow response to multiple emergency calls made in the hours before disaster struck.

But some experts suggested more policing alone may not have been enough to avert the tragedy.

“They either become part of the crowd themselves, and hence their lives will be in danger too, or they will be pure observers that do not even have enough information about what is happening within the crowd,” crowd safety expert Milad Haghani of the University of New South Wales told AFP.

According to Haghani, Itaewon’s Halloween festivities ticked all the risk factor boxes for crowd surges.

The typically boisterous neighbourhood is crisscrossed with narrow alleyways that lack an obvious “potential escape route”.

Then there were issues around the lack of event organisation itself, including “unrestricted entry” of people into a small space, “no ticket sales” which left no exact estimate of demand, and no active monitoring of the crowd density.

“This is a recipe for disaster in mass gatherings,” Haghani said, adding that it was “reminiscent” of the 2010 Love Parade in Germany but with “far many more casualties”.

During that free-access music festival, 21 people died from suffocation and hundreds more were injured as the crowd struggled to escape a ramp leading to the event.

Such incidents are frequently caused by “mismanagement by event or venue organisers” rather than “panic” among the crowd, said an expert on crowd psychology at the University of Sussex, John Drury.

Witnesses in Itaewon told AFP last Saturday that early on in the night partygoers along one particular chokepoint were sustaining injuries simply due to crowd density.

Less than two hours later, people began spontaneously falling over and then trampling on each other in a tight knot of bodies that made it all but impossible to move or breathe.

To avoid too many bodies being crushed in too narrow of a space, such street events need “months of planning” by experts, Kant in the Netherlands said.

This includes calculating visitor capacity beforehand and then counting and monitoring the size of the crowd and possible bottlenecks either on the ground or via CCTV.

“During the event, if maximum capacity is reached, further access to that area should effectively be shut off,” Kant added.

It was only around 2am, or more than seven hours after the first emergency call, that officials banned everyone except officials and medical workers from entering Itaewon.

National police chief Yoon Hee-Keun acknowledged that officers had failed to properly responded to the many citizen calls warning of danger, while the interior minister promised an investigation into what exactly happened in Seoul.

“I am 100 per cent convinced this tragedy was preventable,” said Kant. “Crowd crushes or crowd disasters were and are always predictable, thus preventable.”