THE WASHINGTON POST – Stick to one lane and pick one genre is common advice for aspiring writers. But in literature, every rule can be broken. There are many great writers who make us wonder which shelf their book should occupy: science fiction, fantasy, thriller or… miscellaneous? Let’s discuss some of the best books that defy categorisation.

SILVIA: The Darkangel (1982), by Meredith Ann Pierce is a fascinating young-adult novel that is technically science fiction – it’s set in a nebulous, distant future – yet reads like a fairy tale. A vampire must obtain 14 brides before he can become immortal, but things get complicated when a young woman intrudes into his castle. A charming read.

Patrick Suskind’s Perfume (1985) focusses on a man from the slums of 18th Century Paris with a sense of smell so sublime it jumps into the realm of the fantastic. But it’s also the tale of a serial killer on the hunt for the perfect scent – and the ideal victim. Similarly, The Prestige (1995), by Christopher Priest might at first seem like a historical novel in epistolary form about two rival stage magicians, but as the book advances it becomes part mystery, part science fiction story.

I’ve seen Titus Groan (1946) by Mervyn Peake described as a “fantasy of manners” and a “Gothic” novel, though neither term quite hits the mark. It lavishly details life at a labyrinthine castle, unveiling a large cast of characters and following the machinations of a social-climbing kitchen boy. Piranesi (2020) by Susanna Clarke, shares a resemblance to Peake’s impossibly large Gormenghast castle, so if you liked one you might like the other.

LAVIE: Shimon Adaf’s Lost Detective trilogy is coming out this summer, translated from Hebrew by Yardenne Greenspan. While the first novel, One Mile and Two Days Before Sunset, is an almost-traditional mystery, set in the aftermath of Israel’s short-lived rock renaissance of the ‘90s, by the third (and epic sized) volume, Take Up and Read, it veers into science fiction, combining with and crossing between realistic fiction, detective and full-on Weird. But even in the first book, Adaf’s love of science fiction is expressed through his detective hero, Elish Ben Zaken, whose reading tastes reference classics of the genre. If you like Roberto Bolaño you will like Adaf. 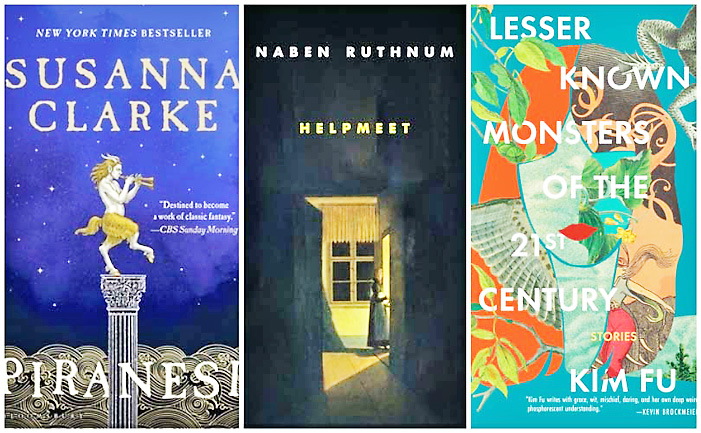 Speaking of Bolaño – another writer who had a genuine love of science fiction – I have a soft spot for his Nazi Literature in the Americas (2008), translated from Spanish by Chris Andrews. Everyone should read Bolaño, but if you struggled with the epic 2666 consider this an easier entry point – a winding saga of dreamers, conspirators and, yes, fascist science fiction writers that’s a joy from beginning to end.

SILVIA: For those seeking shorter reads, I recommend the novella Helpmeet by Naben Ruthnum. A woman cares for her sick husband, who is suffering from a condition that takes this tale from the realm of historical fiction into Weird fiction. At times a deeply disturbing, body horror tale and at others a tender love story, it’s one of the finest books I’ve read this year. Finally, Lesser Known Monsters of the 21st Century by Kim Fu is a lovely, new collection of eclectic tales, with everything from virtual simulations with the dead to a man made of sand.

LAVIE: Disturbing and tender brings to mind Christie Sims and Alara Branwen’s Taken by the T-Rex (2013), which took the literary world by storm and ushered in a new, golden age of dinosaur erotica. Yes, it’s really a thing – talk about mixing genres!

EJ Swift’s Paris Adrift (2018) has its young protagonist working a late shift in a bar in Montmartre – where the cellar provides for an increasing series of time-slips into the history of Paris. Science fiction, historical adventure or contemporary coming of age? All of those, and it’s lovely.

Finally, one of the most funny and surprising sf novels of the last few years has to be Philip Palmer’s Version 43 (2010), in which a RoboCop-like cyborg (the titular “Version 43”) is sent to a remote planet to investigate a crime. He promptly does, finds out the conspiracy behind it all, and is murdered for his troubles. Enter Version 44. Bodies pile up in this mash-up of science fiction, detective and conspiracy thriller – with a lot of humour and a big-screen, hyperkinetic energy. What about you, dear reader? What hard-to-classify titles do you enjoy?