Scary – and scary good – shows and movies to watch

THE WASHINGTON POST – There’s nothing we love more than cozying up to a scary (and/or scary good) TV show or movie. We’ve rounded up some of the most frightening fare.

Mike Flanagan, who has helmed various hauntings (Hill House, Bly Manor), takes us into Brightcliffe, a mysterious hospice for terminally ill teenagers in this story based on Christopher Pike’s novel of the same name. The 10-episode series follows Ilonka (Iman Benson), whose plans to attend Stanford University are put on hold by a cancer diagnosis. Beware the jump scares, but like most of Flanagan’s work, the underlying themes here are deeper than things that go bump in the night. At heart, The Midnight Club is about taking control of your life as it slips away and having the strength to confront death head-on.

The horror auteur behind Pan’s Labyrinth and the upcoming Pinocchio curates this creepy anthology – think Black Mirror meets Hitchcock – which features stories written by del Toro and others, including Jennifer Kent (The Babadook), David Prior (The Empty Man) and Ana Lily Amirpour (A Girl Walks Home Alone at Night). The first installment stars Tim Blake Nelson (Watchmen) as a white supremacist who makes a living buying storage units relinquished by dead people and encounters more than he bargained for in one haul. Another features Kate Micucci (The Big Bang Theory) as a lonely taxidermy enthusiast who undergoes an unsettling transformation after using an infomercial-touted face cream.

If you haven’t yet tucked into this network gem about a married couple who inherits a very haunted country house – and decides to keep living there because New York real estate is no joke – we highly recommend introducing yourself to Sam and Jay Arondekar (Rose McIver and Utkarsh Ambudkar). Their lively band of ghost roomies, who are visible only to Sam following a near-death experience, include an affable Scout leader who took an arrow to the neck, a flower child who got mauled by a bear and a prohibition-era jazz singer who met her match. A binge-watch to catch up on the show will help you narrow down a Halloween costume while you laugh out loud. 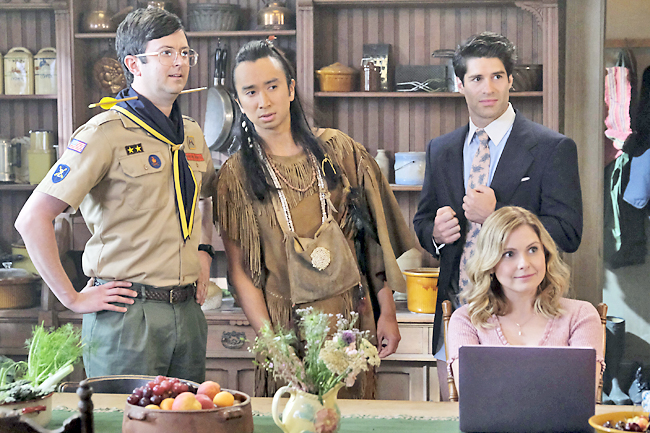 Serial killer Sam (Domhnall Gleeson) kidnaps his therapist, Alan (Steve Carell), in this unsettling, critically acclaimed drama that is just as compelling in its exploration of a wounded man’s darkest impulses as it is in dealing with the grief Carell’s character navigates following the death of his wife and estrangement from his son. Former Washington Post TV critic Inkoo Kang, who praised the series’s “truly novel premise” and “emotional naturalism”, noted that the drama is unique in how it “makes us care far more about why Sam kills rather than how he does it”.

Aisha Dee (The Bold Type) plays Cecilia, a social media influencer who finds herself stuck in a remote cabin for a bachelorette party with her former BFF Emma (co-director Hannah Barlow) and Alex (Emily De Margheriti), the bully who came between them as teenagers. As Cecilia plots her revenge, the carefully curated life she’s created online unspools into bloody and darkly comedic chaos. Honestly, we were scared at “bachelorette”.

The movie that made us never want to stand in front of a mirror with the lights off gets an update from director Nia DaCosta and producer Jordan Peele, who knows a thing or two about combining social commentary and the horror genre. Yahya Abdul-Mateen II plays Anthony McCoy, a visual artist who becomes obsessed with the urban legend of Candyman, who looms large in gentrifying Chicago.

Imagine showing up at your Airbnb in the middle of the night only to discover the rental home is already inhabited by a supposedly double-booked houseguest and other terrors.

If you need a family-friendly viewing option (or a palate cleanser), may we suggest this sequel to the 1993 Halloween classic? Come for the nostalgia, stay for the brilliantly cast backstory on the Sanderson sisters. Don’t worry: Bette Midler, Sarah Jessica Parker and Kathy Najimy reprise their roles as the adult trio, and there are still musical numbers and much ado about eating children’s souls.

A teenager, voiced by This Is Us star Lyric Ross, must confront her (literal) demons – voiced by Peele and Keegan-Michael Key – in this stop-motion treat co-written by Peele and Henry Selick (director of Coraline and The Nightmare Before Christmas). Angela Bassett and Ving Rhames also lend their voices to the animated horror-com that explores the trauma that comes from the death of a parent.

The entire final season of Atlanta, deserves your attention, but if you only have time for one episode, make it the one that imagines a serial killer inspired by rapper Soulja Boy, best known for his meme-worthy proclamations and inescapable 2007 hit single Crank That.

And if you haven’t yet seen Season 2’s Teddy Perkins, about a mysterious man with childhood trauma and a skin condition that renders his face a powdery white, crank dat one, too.