FORT WORTH (AFP) – World number seven Aryna Sabalenka rallied from a set down to beat second-ranked Ons Jabeur on Monday as round-robin play began at the season-ending WTA Finals.

Sabalenka shook off an error-strewn start to beat the Tunisian, a finalist at both Wimbledon and the US Open this year, 3-6, 7-6 (7/5), 7-5 at Dickies Arena in Fort Worth, Texas.

“I think it’s the biggest win of the season for me,” said Sabalenka, who was a semi-finalist in the WTA’s season finale last year but has endured a disappointing 2022 campaign.

“She played unbelievable and somehow another miracle happened for me and I was able to win this match.”

Sabalenka had to dig deep to improve her record against Jabeur to 3-1.

Jabeur, making her WTA Finals debut, was two points away from victory at 5-3 in the second set tiebreaker, and she had two chances to break for a 5-2 lead in the third.

But Sabalenka held on, breaking Jabeur at love to level the set at 4-4 and capturing the victory when Jabeur netted a forehand on the first match point.

“I didn’t feel welcome on this court,” Sabalenka said of her early struggles. “I couldn’t understand what was happening, the ball was bouncing too slow for me.

“Then in the second set I kind of calmed down and tried to think what I had to do to win this match.” 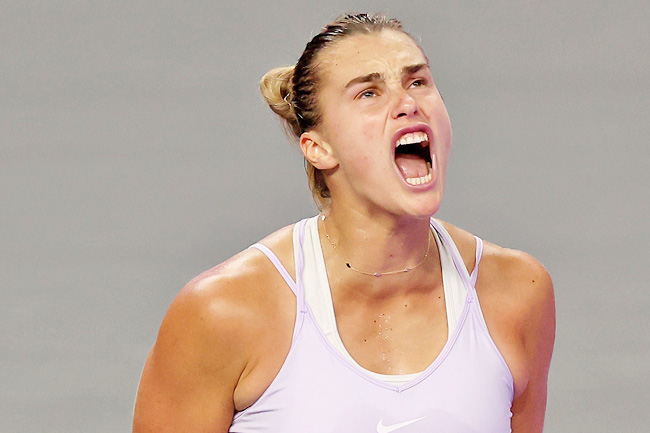