Running out of time

WASHINGTON (AP) – President Joe Biden toasted a re-election campaign with his French counterpart. He and the Reverend Al Sharpton talked about the prospect during a photo-op. And, for someone who often meanders through his thoughts, Biden has been notably explicit about his political plans.

“Our intention is to run again,” the president told reporters after the November midterms, noting that his family supports another campaign. He said his wife, First Lady Jill Biden, has already counselled him not to “walk away” from the “very important” things he’s doing on the job.

None of that, however, has silenced a Washington parlor game about whether Biden will follow through with a second presidential campaign. The speculation reflects a persistent, though often privately expressed, scepticism among even some of Biden’s allies that the 80-year-old president will ask voters to keep him in the White House until he’s 86.

Biden is expected to discuss the prospect of another campaign with those closest to him when he departs Washington for a Christmas vacation. If he opts for an announcement next year, he would launch a campaign during a time when his approval ratings remain low and inflation is high. The steady easing of the pandemic, meanwhile, would add pressure on the president to appear in person before large crowds, an environment where he’s sometimes unsteady.

But Biden’s standing inside his party has improved in the aftermath of the midterms, when Democrats kept the Senate and limited Republican gains in the House. He’s long vowed he’s his party’s best option against former president Donald Trump, who has already announced his third White House campaign. 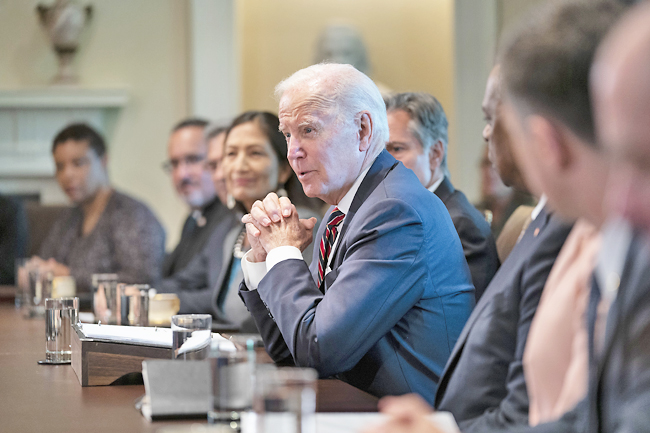 Trump has been blamed for the GOP’s disappointing November losses in states, including Georgia, Arizona and Pennsylvania, that will be among the most politically competitive territory in 2024.

“I’m not going to abandon a president who is winning,” former Democratic National Committee chairwoman Donna Brazile said at a recent party meeting.

The White House’s political staff and top Biden allies aren’t waiting for the official go-ahead, already lining up staff and preparing for a 2024 campaign launch next spring. They’re eyeing the end of the first quarter, thus avoiding the period in which raising money often proves most difficult. Such a timeline would follow the lead of president Barack Obama who, with Biden as his vice president, kicked off his 2012 bid for a second White House term in April 2011.

Biden aides and allies chafe at the speculation he may not run again, saying the president should be taken at his word. They note it’s not uncommon for incumbent presidents to delay formally launching their reelection campaigns as long as possible to heighten the contrast with their out-of-power rivals jockeying for primary position.

Federal election law requires candidates to register once they raise or spend USD5,000 for an election, triggering disclosure requirements and putting some limitations on how they can work with outside groups – actions Biden is likely trying to put off until next year.

Still, filling the political void have been reports that the First Lady told French President Emmanuel Macron that she and her husband are ready for a reelection campaign. The remark is reported to have come before the couple joined Macron in a playful 2024 toast during a recent State Dinner.

Same goes for Sharpton, who reportedly told aides that Biden said of another run that he was going to “do it again” while the pair posed for a picture in the White House’s Roosevelt Room in August. And Vice President Kamala Harris has dismissed as “part of the punditry and the gossip” questions that a 2024 ticket might feature Biden but not her.

The White House hasn’t denied the Macron toast and Sharpton says no one from Biden’s political circle contacted him after word of the pair’s August chat about reelection began breaking.

But Sharpton also now says that what actually happened wasn’t as dramatic as the reports it sparked.

“He said to me basically what he said in public, that he intended to run and he’d let me know when it was his final decision,” Sharpton said. “And I was saying he should run. I don’t know why he wouldn’t.”

Still, Sharpton also said that during that photo op, “I did get the feeling from the way we talked that he was leaning toward running.”

Sharpton recalled Biden telling him at a Martin Luther King Jr Day breakfast in 2018 that, given the direction Trump was taking the country, “I really think I’m coming in” the 2020 race.

“That same kind of gut determination that I sensed that day – when he was really going to run in ’19 – I sensed that day in the Roosevelt Room,” Sharpton said. “His words didn’t say anything different, but it was almost that sense of, he feels like he’s got to do something.”

No president has voluntarily left the White House after a single, four-year term since Rutherford B Hayes in 1881. Biden said during the 2020 campaign that he wanted to be a “bridge” to a future generation of Democratic leaders, but he has struck a far differently tone more recently.

The president said his decision wouldn’t be swayed by polls indicating that most Americans don’t want to see him run for reelection. And he offered a message for anyone worried he couldn’t handle the physical rigors of another campaign: “Watch me.”

Despite having run unsuccessfully for the White House twice before his 2020 victory, Biden also is no stranger to prolonged public vacillating over a presidential run.