Upon arrival, Their Royal Highnesses were greeted by Singapore’s Minister of Education Chan Chun Sing.

Their Royal Highnesses were briefed by school principal Chow Weisi on the history of the establishment, achievements and future outlook of the school.

Her Royal Highness then presented a collection of educational books to student representatives, which among others, aimed to be a source of reference to learn the Malay language as well as an effort to share the Sultanate’s historical background and culture.

Their Royal Highnesses also observed a biology class using the latest technology, as well as interacted with students on the ‘respiration’ exercise in the science lab. The lesson showcased how technology can support learning and provide the link to real life applications.

Their Royal Highnesses then visited the Eco Community Garden – which was designed to provide learning opportunities for environmental education – as well as other basic facilities including the Victoria Hostel.

After the school visit, Their Royal Highnesses attended a luncheon hosted by President of Singapore Halimah Yacob and spouse Mohammed bin Abdullah Alhabshee. The luncheon was held at the Istana in Singapore.

Upon arrival at the East Drawing Room, Their Royal Highnesses were welcomed by the president and spouse. 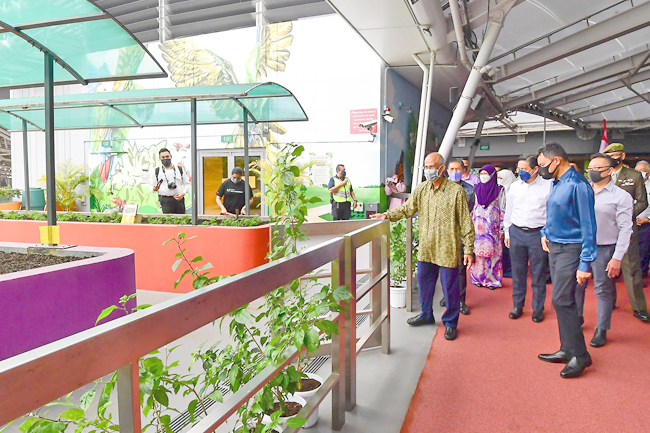 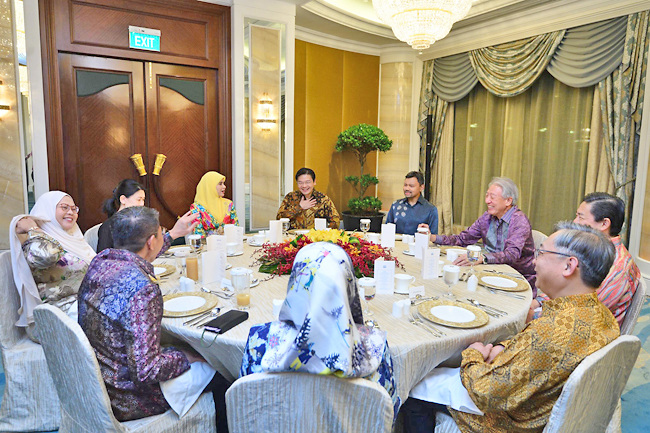 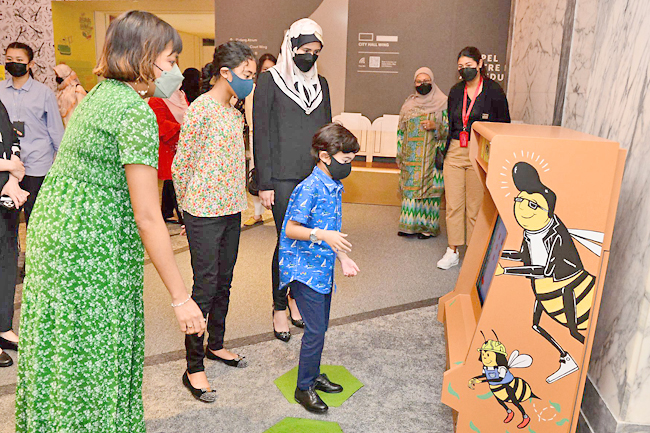 Their Royal Highnesses, together with the president and spouse, proceeded to the President’s Lounge for the luncheon.

His Royal Highness and the president discussed ways to utilise the Young Leaders’ Programme in further expanding existing bilateral relations between the Sultanate and Singapore as well as exchanged ideas to explore new opportunities to strengthen long-standing relations.

His Royal Highness then made a visit to the Integrated Public Service Centre (IPSC) at Our Tampines Hub (OTH) in the afternoon.

His Royal Highness was then briefed on OTH and the Public Service Division, followed with a visit to the Eco Community Gardens as well as observing facilities at the IPSC.

The IPSC is a one-stop centre that provides essential government public service to the community in Tampines and its surroundings areas such as bill payments, job applications and financial assistance as well as housing. In addition, the IPSC also promotes digital services including self-service kiosks, video consultation services as well as book loans and booking of sports facilities. The objective of the centre is to assist the public in their dealings with different agencies.

Upon arrival at the school, Her Royal Highness was welcomed by Principal of Punggol Primary School Dr Vivien Ang Wek Cheng.

Her Royal Highness was then briefed by centre head Michelle Thomas on the background of MOE Kindergarten @ Punggol View.

Her Royal Highness also toured several facilities at the school as well as interacted with the kindergarten pupils.

The purpose of the visit was to take a closer look at the country’s initiative in starting learning and teaching at the kindergarten level under the Government of Singapore, through its Ministry of Education.

During the visit, Her Royal Highness visited exhibitions in the Children’s Biennale Gallery such as ‘Because It Makes Me Feel’, ‘My Ink-credible Adventure’ and ‘Conversations with an Octopus’. The interactive exhibitions, among other things, focus on awareness on the environment and climate change, creativity on digital platforms as well as the relationship between human and nature.

Upon arrival at the State Room, Their Royal Highnesses were welcomed by Teo Chee Hean, Lawrence Wong and spouse.

This was followed by the dinner held at Shangri-La Hotel Singapore.